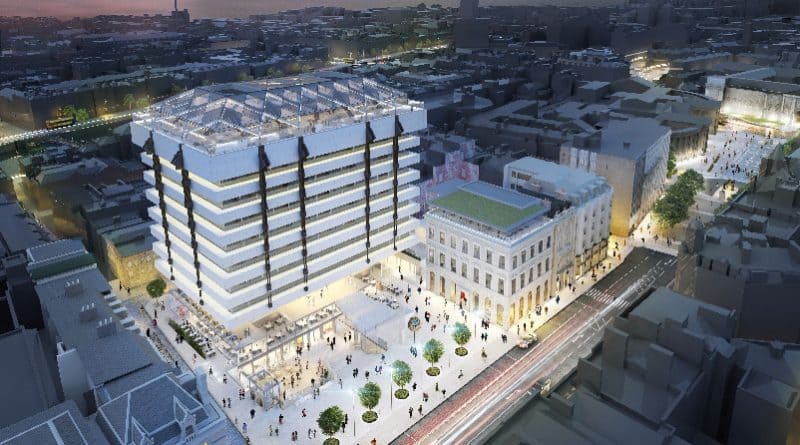 Hines and Peterson is this week submitting a planning application to Dublin City Council that will reposition the former Central Bank HQ as a new landmark destination in the heart of Dublin’s city centre.

Designed by award-winning architect Sam Stephenson in the 1970s, the building was acquired by Hines and Peterson earlier this year, following the Central Bank’s relocation to new premises on North Wall Quay.

The new vision for the building and surrounding area sees the creation of a mixed-use scheme, known as ‘Central Plaza’, which will incorporate retail, restaurants and café uses at street and basement level, as well as the creation of a two-storey rooftop hospitality destination and viewing area. The proposal also envisages an expansion of the existing plaza and the creation of a dynamic new street scape towards College Green and along Fownes Street and Cope Street, creating a pivotal new stepping stone between the key retail and tourist destinations of Grafton Street, College Green, and Temple Bar.

Commenting on the planning application, Brian Moran, Senior Managing Director of Hines Ireland, said “The Central Plaza proposal represents a significant investment by Hines and Peterson in the creation of an outstanding mixed-use scheme that will reinvigorate this iconic city centre building located in the heart of our capital. Our application will include an exciting mix of retail shopping, cafés and restaurants at street and plaza level and in a newly created lower plaza area.

Meanwhile, with unique 360° views of the Dublin skyline, the proposal includes the creation of a new 20,000 sq ft rooftop destination within the building’s existing roof space, providing a viewing area and hospitality space catering to conferences, events, and exhibitions. It will be encapsulated within a new signature glazed roof, designed to significantly enhance the architectural language of the existing building.

Another key aspect of the proposal is the enhancement of the existing plaza that surrounds the building. Upon completion of the redevelopment works, the area will re-open to the public and with the removal of the railings installed in 1998, the plaza will become a larger and even more vibrant public space.”

Today’s application is part of an overall masterplan that includes the adjoining properties 6-8 College Green, No. 9 College Green, and both the Annex and Commercial buildings on Dame Street.

Central Plaza has the potential to accommodate 1,000 office workers and create more than 300 full and part-time retail and hospitality jobs, upon completion.