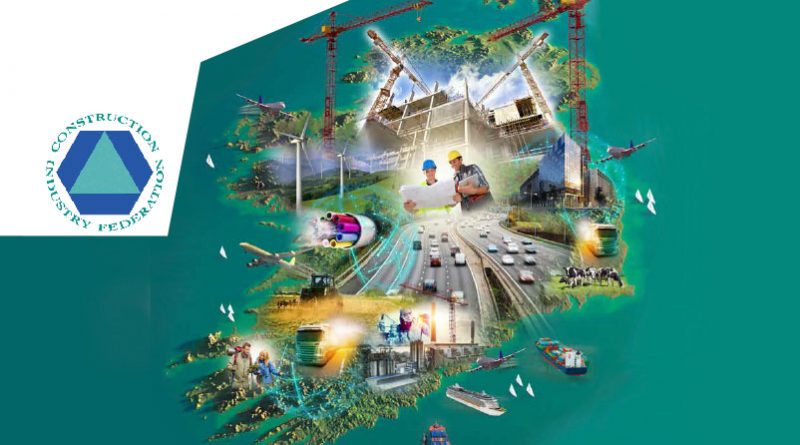 The Construction Industry Federation (CIF) has warned that low levels of infrastructural investment in regional areas will fundamentally undermine Ireland’s economic performance in the next decade.

The warning came at the launch of the CIF’s Regional Development Roadmap in the Tullamore D.E.W Distillery earlier today attended by Minister for Arts, Heritage, Regional, Rural and Gaeltacht Affairs Heather Humphreys.

The CIF’s analysis, carried out by Construction Information Services, shows that approximately 30% of the State’s investment in road, rail and utilities is concentrated in the Greater Dublin Area.*   When the €1.2 billion Dublin to Shannon pipeline -a project aimed at alleviating pressure on Dublin’s water infrastructure- is included, the proportion of investment reaches 48% of the total funding in this sector. This analysis shows the level of investment in roads, rail and utilities such as water and flood defences on a county by county basis.

Speaking at the launch, CIF President, Dominic Doheny said, “The formula for sustained Irish economic success is a strong capital city competing globally for FDI and talent, complemented by dynamic regional economics that are all connected by world-class productive infrastructure. Through a lack of strategic planning and demographic trends, the capital has become the focal point for economic growth in Ireland.

We need to think of Ireland, North and South, as a region that must compete globally instead of our current fragmented approach. In this scenario for example, Cork, Limerick, Galway, Waterford are shaped into a hub that specialises in supporting high-tech, pharma, bio-tech, and life sciences.  They are connected to each other, to Dublin and globally from advanced port facilities and airports. Dublin may choose to advance towards a financial services and technology hub based on an expanded Silicon Docks model.

The business as usual scenario sees the greater Dublin area accounting for over 50% of Irish GDP with the capital city continuing to face accommodation shortages, traffic issues and spiralling rents that will reduce its global competitiveness. Due to its economic importance to Ireland the entire economy is in risk in this scenario.

The critical ingredient in this formula is investment in infrastructure throughout Ireland and connecting regional growth centres by advancing various road projects such as the M20, the M5, implementing the National Broadband Plan and providing greater water and waste water infrastructure nationally. CIF analysis shows that for every €1 billion invested in infrastructure generates and sustains 12,000 direct and indirect construction related jobs in the economy. This is before you calculate the social, economic, and personal benefits of better hospitals, water networks, connectivity through broadband, better public transport, and reduced commuting times.

With greater inter-regional connectivity there are significant cost savings for businesses and economic sectors as it allows economic clusters around Ireland work together in a more efficient and costs effective manner. It also provides them with better access to our ports, a vital consideration post Brexit.”

CIF Director General, Tom Parlon said, “Ireland has a huge amount to offer both indigenous business and Foreign Direct Investment. We have been very successful in attracting business across Ireland in recent years from Tourism along the Wild Atlantic Way and Med-Tech clusters in Galway and the Midlands, to Pharma and Bio-Pharma clusters in Sligo, Cork, Waterford and Dublin, and ICT clusters in Cork and Dublin, the Marine industry, the Energy sector, Forestry and of course the Agri-Food Sector. However, these world-class industry sectors’ economic contribution will be diminished without world-class infrastructure.

The National Competitiveness Council, the ESRI, the Unions, Ibec, Chambers, the EU Commission, and the World Economic Forum, have all identified the need to invest more in our productive infrastructure; from roads and rail, to broadband and ports. Our population has grown by 30% in a generation and we have not taken this into account in our strategic infrastructure

Without infrastructure, Brexit will have a worse impact, the hard border will be harder, transporting our exports to markets in continental Europe will be more expensive and difficult, our FDI companies may move investment to better serviced nations and our citizens will continue to suffer from inadequate services.

Without the provision of infrastructure zoned residential and commercial lands will not be able to be built on.

In this report the CIF is calling for a nationwide focus on the development of supportive, accessible regions to address the current situation in which a congested capital that continues to labour under the weight of producing nearly 50% of Irish GDP.

In 2017, the CIF is calling for a significant increase in capital expenditure in the upcoming review of the public capital programme. This review coupled with the imminent National Planning Framework will be seminal for Irish economic development over the next few decades.

We must get it right. Currently infrastructure funding is at record lows and any increase in the budget will not be felt by the civil engineering sector for two to three years due to lead in times. We also know that while recovery is taking place in urban centres it is yet to have an impact in many regional areas and this is imbalance must be addressed urgently.”

According to the CIF Regional Development Report completing Ireland’s road network and connecting the many regional clusters of economic activity, would facilitate the expansion of this economic activity, while complimenting growth in urban centres.

Conor O’Connell, CIF Regional Director for the Southern Region said: “Infrastructure is the skeleton that enables our economies to move and adapt.  As we face the potential of a 4% drop in GDP over the next decade arising from Brexit, investing in infrastructure is one way to offset this impact.

The Dunkettle Interchange/N28 project around Cork Port and the N5 Derry to Dublin road are two practical examples of the Brexit-proofing effect of infrastructure investment.  The first will support the capacity of the Port of Cork, our nearest Tier 1 Port to Continental Europe. This is critical as post-Brexit, Ireland will not be able to ‘landbridge’ exports from the UK around the globe. This has the potential to fundamentally undermine the competitiveness of Irish exports particularly in the agri and pharma sectors.

The CIF Regional Roadmap highlights the many key industries we have outside of the greater Dublin area and what’s required to connect these industries with the capital and each other.

Throughout the recession, Ireland experienced major urbanisation as people moved to cities for employment. As Dublin, has been the primary driver of employment growth and economic activity, its population has grown rapidly. This will continue until Ireland’s regions are connected by infrastructure offering real opportunities for careers and quality of life.

There are several clusters of extremely positive economic activity throughout Ireland that can if we connect them with infrastructure can build a strong diverse society. However, some of these clusters are impeded from further expansion by poor connectivity, both internationally and nationally. The CIF will continue to work with Government to deliver the connective and productive infrastructure that will lead to a balanced economy.”