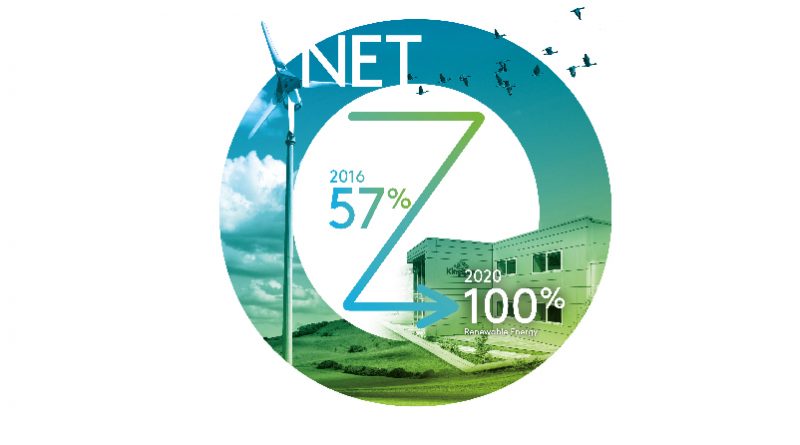 Kingspan, a global leader in high performance insulation and building envelope solutions, has announced it has beaten its target of generating at least half its aggregate energy use from renewable resources by 2016.

Kingspan’s aggregate renewable energy use was 57% of its total energy use in 2016, meaning the company is firmly on track to hit its goal, set in 2011, of operating at Net Zero Energy (NZE) by 2020.

Kingspan has taken a three-pronged approach to reducing its energy foot print:

Save more energy: Energy efficiency measures introduced by Kingspan have reduced the company’s overall lighting and heat costs by over 30% and achieved almost a four-fold decrease in carbon intensity levels.

Generate more renewable energy: Kingspan’s on-site renewable energy generation has jumped from 6.6 GWh in 2012 to 32.2 GWh in 2016 through the use of solar, wind and biomass technologies. On- site generation across multiple sites globally currently supplies 7.6% of the company’s total energy use, and more projects are now under construction. For example, in 2015 Ireland’s largest solar PV roof panel installation was made at its Portadown facility, which generates 30% of the plant’s energy needs.

Kingspan is proving that it is not only possible for a manufacturing company to be energy neutral, but is making an impressive business case for it.

Commenting on beating the 50% NZE milestone, Kingspan CEO, Gene Murtagh, said: “We are very pleased to have exceeded our targets on our path to operating as a Net Zero Energy company by 2020, hitting 57% renewable energy in 2016. In the five years since launching this initiative we have seen multiple benefits including reductions in costs, less reliance on fossil fuels and demonstrating the business case for our systems and solutions. Without more action from the corporate sector, greenhouse gas emissions will continue to rise and the impact of global warming will become a bigger threat for future generations.”

Kingspan has been able to achieve its goals, reducing its impact of the environments, while growing its business at a record pace through acquisitions and strong organic growth. Kingspan now has over 10,000 employees and more than 90 manufacturing plants operating across the world.

Kingspan’s environmental achievements have been recognised through its A List ranking on the CDP Climate Performance Leadership Index, for the second year running. It is the only Irish-listed company recognised on this index compiled at the request of 827 investors who represent $100 trillion of assets under management. Kingspan is also a member of the RE100, a group of some of the world’s best known companies committed to using 100% renewable power.