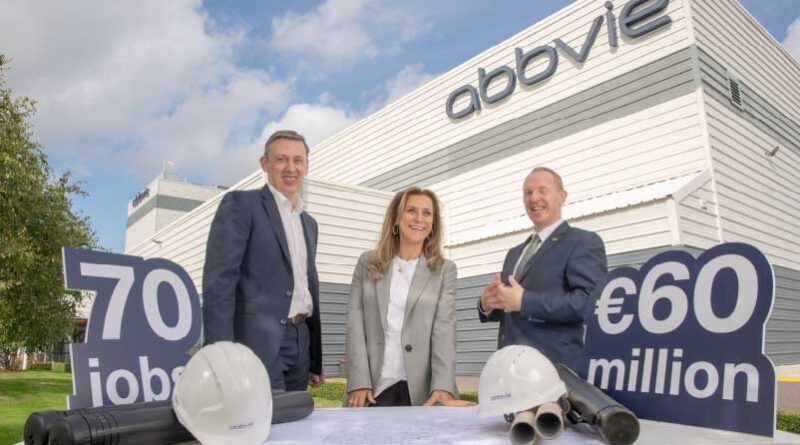 AbbVie a global research and development-based biopharmaceutical company with a significant presence across eight Irish locations, today announced a €60m investment at its manufacturing site in Cork.

The expansion, which will include the development of a new state-of-the-art facility, will create approximately 70 new jobs. New technologies will be introduced to the site in Carrigtwohill which will allow it to support AbbVie’s aesthetics business.

AbbVie will also leverage the expansion to introduce new technology and upgrades that will improve the carbon footprint of the wider Cork site.

Construction will commence in 2023 with manufacturing operations scheduled to begin in 2025.

In addition to the multimillion-euro investment announced today, AbbVie is also embarking on a three-year strategic training programme at the Carrigtwohill facility. The initiative is supported by the Government through the IDA and will enhance and develop key workforce skills to support incoming new technologies.

The Carrigtwohill plant celebrates its 20th anniversary in November and currently employs approximately 150 people. The €60m announcement brings AbbVie’s total investment at the location since the company’s inception in 2013 to approximately €177m.

Tánaiste and Minister for Enterprise, Trade and Employment, Leo Varadkar, said: “This multi-million investment by AbbVie is brilliant news. It’s a fantastic opportunity for Cork with the creation of 70 high value jobs in Carrigtwohill. AbbVie has been in Ireland since 1974, and now has eight locations across the country. Ireland is a world hub for life sciences and we’ve worked hard to create a welcoming environment for companies. This investment will reduce the carbon footprint at the Cork site and is setting a good example for the broader sector. I thank AbbVie for its continued investment in our country, and I wish the team all the very best with this expansion.”

“AbbVie traces its heritage in Ireland back to 1974 and is a company with a very strong presence all around the country. It is helping create high-quality career opportunities here in Cork, and has plants and office hubs in Dublin, but AbbVie also successfully manufactures innovative medicines for global supply at locations far from traditional pharma hubs on the west coast of Ireland, at Westport in County Mayo and in Sligo.

“It is great news to see a Cork plant that is already celebrating its 20th anniversary further enhance its capability and potential within the AbbVie Irish and global network through the imminent addition of new technologies and skills.”

Commenting on the announcement Malcolm Garde, Site Director, AbbVie Cork, said: “This latest investment is a fantastic opportunity for the Cork site and a recognition of the expertise and commitment of our dedicated employees over the past 20 years. The expansion and associated cutting-edge technologies will help us to further develop our employees and attract new skilled talent.”

IDA Ireland CEO Martin Shanahan said: “This latest investment by AbbVie is a testament to Ireland being an attractive and supportive location for continued investment by established companies. Marking two decades of successful operations at its manufacturing site in Carrigtwohill by making a further €60 million investment, creating 70 additional jobs, is a strong endorsement and demonstrates a clear commitment to the company’s Cork site.

It’s a very significant day for a plant that already has a long and proud record of pharmaceutical manufacturing and innovation. IDA Ireland is delighted to partner with AbbVie in creating these opportunities for new employees who will help write the next chapter in its story.”

The 70 new roles will be spread across various areas including sterile manufacturing, quality control, and engineering.

AbbVie employs approximately 2,600 people at seven other locations across Ireland including Sligo, Mayo, and Dublin.