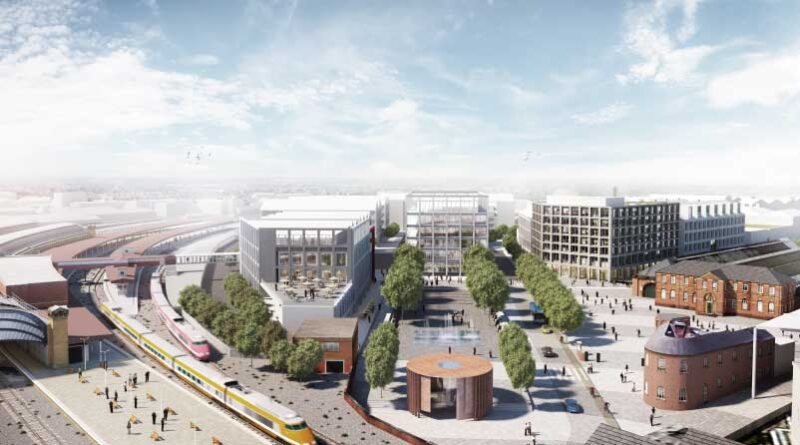 John Sisk & Son Ltd has been awarded a contract for the £100m infrastructure package phase of the York Central masterplan.

The design and build contract, gained through the YORCivil framework, includes the construction of a new road bridge and footbridge over the East Coast Main Line, 2km of single carriageway road including separated cycle and pedestrian provisions, a rail spur to the National Railway Museum, and earthworks and utility works site wide. The team are involved in design work prior to the start of the main contract.

Over three years, this phase of the project will put in place the key infrastructure needed for the transformation of underused brownfield land into a vibrant and distinctive new mixed use neighbourhood – complete with residential, cultural, recreational, commercial and outdoor amenity spaces. The project is being brought forward by Homes England and Network Rail as majority landowners, and in wider partnership with the City of York Council and the National Railway Museum.

The wider York Central masterplan has previously been consulted on, with outline planning permission granted in December 2019. The overall scheme will deliver up to 2,500 homes, 20% of which will be affordable, and over one million square feet of commercial space for offices, retail and leisure, providing a significant boost for the local economy. Situated next to York Railway Station, York Central will offer excellent connections to the wider city and the rest of the UK. This will transform the area and help achieve the goal of bringing £1.16bn to the local economy, helping to level up York and deliver its future heritage.

Sisk has already completed early contractor involvement and enabling work on the project, including work with local schools, community groups and charities. Work on the infrastructure phase is set to start in summer 2022.

John Sisk & Son Regional Director of Major Projects Andy Langley says: “I’m delighted that Sisk have managed to help the client develop the project ready for construction. It’s fantastic to be involved in this exciting project and be a part of the local community as we build the major infrastructure in-line with the York Central masterplan.”

Paul Brown, Chief Executive Officer at John Sisk and Son, commented: “Sisk is delighted to be involved in this exciting project. We are committed to delivering this project for the benefit of the whole community and look forward to working in partnership with all the key stakeholders.”

Peter Freeman, Chair of Homes England, said: “This marks a significant moment for York Central. We know what a transformational impact urban regeneration schemes such as this can have on a place and the benefits it will offer York’s community. That’s why we’ve partnered with Network Rail to help unlock this long-stalled site. The delivery of crucial infrastructure will help achieve that, bringing ours and our partners’ ambitions for this underutilised area another step closer to reality. It’s brilliant to see the plans starting to come to fruition.”