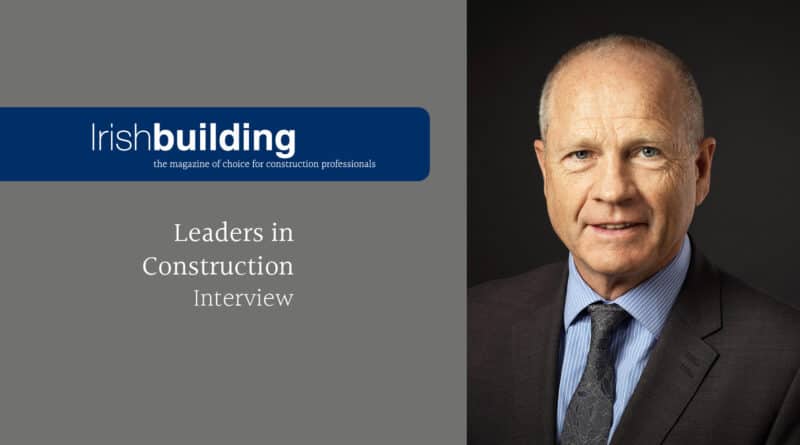 From adopting innovative technologies through to safety leadership and mental health awareness, Collen Construction is continuously focused on staying ahead of the curve.

On 24 May Collen Construction opened a centre of excellence for data centre construction at its headquarters in East Wall in Dublin to centralise and showcase the expertise it has built up in this sector in Ireland and mainland Europe since 2010.

Managing Director, Tommy Drumm provides the following example to illustrate the level of this expertise: “We transported 56 modules from E&I Engineering in County Donegal to Dublin for a large twin data centre for one of our clients. Because we were responsible for design on this project, we were able to introduce modularisation and take major elements of the electrical room building into the factory. Some of the modules weighed up to 30 tonnes and were up to 13m. long and 4.7m. wide. It was a massive logistical exercise. Since then, we opted to have smaller modules manufactured for the same client in Estonia for a project in Sweden. We are continuously innovating and refining the process.”

Collen secured its first order with a confidential data centre client in 2010 during the global financial crisis and from there grew counter-cyclically while most other contractors were shrinking, according to Drumm.

“Data centres have been a game changer in the history of our company. Working with Tier 1 hyperscale data centre clients makes it easier for us to mobilise within a new market – they help us with local knowledge, research and supporting architecture.  The clients we work with are at the leading edge of innovation, which gives us the opportunity to raise the bar on our capabilities nationally and then we keep learning as we expand and travel further afield,” adds Drumm.

While Collen’s Irish turnover dropped last year because several of its projects were closed until recently, fortunately, due to its European operations, the company’s overall turnover increased. Indeed, as a result of its continuing growth in Europe, Collen is currently advertising for a European Operations Director.

In the domestic market, Collen was fortunate to have a number of projects deemed essential during the pandemic. In addition to data centre work for three separate clients, the Collen team was kept busy on a baggage handling upgrade in Dublin and Cork airports, a 5,000 sq.m. primary care facility in Bray, County Wicklow and the fit out of the WuXi Biologics facility in Dundalk, County Louth, amongst other projects.

Gerry Byrne, Professor of Mechanical Engineering at University College Dublin, is advising Collen on research and development at the centre of excellence, where the latest digital technologies are being adopted. “There isn’t a project we can’t handle from there as we can access data from anywhere in Europe. For example, we can do a virtual site walk in Sweden where staff walk around with cameras on their helmets and we can call down drawings from the platform as we review the design,” says Drumm.

“We are also designing our own tagging system, which will allow us to transparently commission a building. Electrical and mechanical systems are so complex with data centres that we are moving into 4D simulation. This is all driven by our data centre clients. The technology they use is best in class and we leverage that.”

Collen has invested in a Leica RTC360 3D laser scanner, which allows it to document and capture the site environment. Because it is integrated into the workflow with real-time verification, Collen can manage project complexity with accurate 3D surveys, which improves efficiencies. Collen also uses the Last Planner® system on all jobs from the outset so everyone involved has a full understanding of what is expected in order to deliver for clients in a tight timeframe.

“Using Lean planning principles is the most effective way to achieve buy-in from the supply chain. In the past 12 months, we have been holding weekly leadership meetings with both our own suppliers and companies employed directly by clients, and with everyone focussed on key milestone delivery, lean last planner has resulted in improved programme certainty,” notes Drumm.

One of the aspects Drumm believes gives Collen the edge in the data centre space is its focus on world-class safety leadership. As well as being awarded ISO 9001, ISO 14001 and ISO 18001 accreditation for its systems in 2016, Collen was asked over three years ago by the National Standards Authority of Ireland to launch a new global standard – ISO 45001. This standard provides a framework to improve employee safety, reduce workplace risks and create better, safer working conditions.

Upping its game even further, Collen recently appointed Consultant Lawrence Parrett as a specialist to help the company to achieve a zero-incident safety leadership culture. He had trained Drumm and the team he worked with on this specific area on the Gorgon LNG project for Chevron in Australia in 2009. “Lawrence has worked with our senior team to help devise a behavioural-based safety leadership programme which we will be presenting at the June board meeting. This represents a significant step-change in our attempts to get to zero-incidents,” Drumm explains.

Towards the end of 2020, Drumm decided to explore how best to manage change and improvements in the business. From this process, he came up with a plan to use a committee system in key areas, including mental health and wellbeing, diversity and inclusion, corporate social responsibility (CSR) and sustainability.

“Change tends to be slow in the construction industry. One of the things representative organisations such as the Construction Industry Federation and the Master Builders and Contractors Association (MBCA) do brilliantly is use the committee system to try to manage change and bring everybody along. I observed this as President of the MBCA in 2019,” says Drumm.

Collen Director, Tom O’Connor chairs the Mental Health and Wellbeing committee, which has brought in specialist advice on how to train leaders in the business of understanding and dealing with mental health issues. Company Secretary, Kara Stuart, who chairs the Diversity and Inclusion committee, is focused on seeking to bring Collen from Bronze to Silver accreditation of the Investors in Diversity mark.

“We are undertaking training in Diversity and Inclusion to develop inclusive leadership skills and positive role modelling. The industry needs more female role models. I was really pleased to see Rachel Clarke appointed as the first female President of the MBCA in 100 years,” says Drumm.

The percentage of women in construction in Ireland currently stands at 6.5% of the total number employed. However, 19% of Collen’s workforce at present is female, including Business Development Executive, Orlagh Sweeney, who is responsible for the company website, intranet and digital communications. One of her ideas which came to fruition last year was a ‘North to South Pole’ bike ride, involving 260 people in various countries around the world cycling a total of 25,562km, which raised €61,000 for charity. This year, the Collen Annual Charity committee, chaired by Alan Barnes, Project Manager, will run an event where people will attempt to cycle ‘Around the World’, or 40,075km, in eight days.

In the area of sustainability, Environmental Officer at Collen, Katherine Valery, is one of only 96 people in Ireland to achieve the LEED Green Associate accreditation and is currently working towards AP accreditation. She joined Collen in April 2020, bringing with her 15 years’ experience in oil and gas and a master’s degree in environmental science.  Katherine brings world class standards and is certainly raising the bar across Collen’s projects. The company is currently trialling Silver membership of the Irish Green Building Council and recently kicked off a ‘Green Project of the Month’ initiative.

“We are lucky to work with brilliant clients that are aiming to becoming carbon neutral by 2025. Other data centre clients are aiming to be carbon negative by 2030, and by 2050 will remove from the environment all the carbon the company has emitted either directly or by electrical consumption since it was founded. Katherine is best-in-class in terms of advising us in this area,” says Drumm.

Established in 1810 and currently employing 360 people, Collen was ranked seventh in the Sunday Independent/Statista ‘Ireland’s 150 Best Employers’ list in May. It recently appointed Gráinne Dowling as Head of  Human Resources as part of its strategy to capture Collen’s longstanding family culture and roll it out across the business throughout Europe.