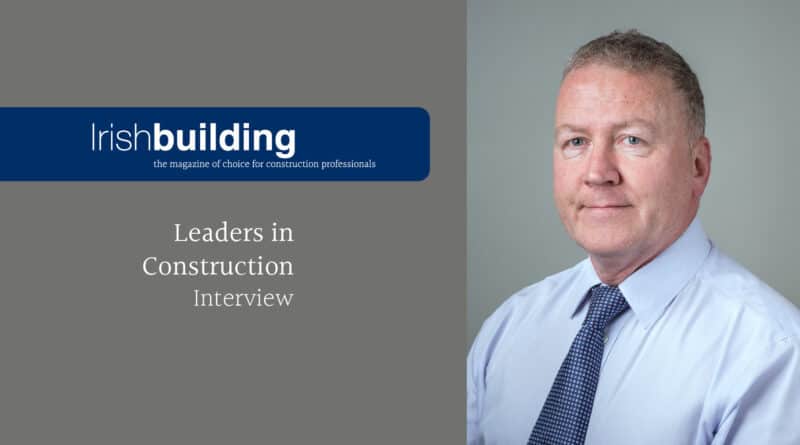 From its roots in the rebuilding of London in the aftermath of the Second World War, the Murphy Group has always been ready to look to new opportunities and horizons, says John Murphy, Managing Director of the Irish operation.

Innovation and diversification have been central to the rise and rise of Murphy Group since the business was set up in London in 1951 – by Kerryman John Murphy who had left Cahirsiveen some years earlier – to work on post-war regeneration projects. Always looking at new opportunities, the company soon switched its focus to the reconstruction of the UK’s electrical infrastructure and then on to road expansion and other transport programmes, water services and gas and oil pipelines.

Today, the business has an annual turnover of over €1bn and major operations in the UK, Canada and Ireland. The company specialises in pipeline projects in Canada and on large scale infrastructure in the UK, including, for example, the Channel Tunnel rail link, Crossrail and the Olympic Park in London.

In Ireland, meanwhile, the Murphy brand has been around since 1968 when the business was set up here by John Murphy’s son, Bernard. Another John Murphy – no relation to the family – has been Managing Director of Murphy Ireland since 2016.

Murphy is a civil engineer by profession – he’s the current President of the Civil Engineering Contractors Association (CECA) – and worked with a number of contractors before joining the Murphy Group. His previous roles include Operations Director and supervisory board member on the €1bn Optimise Amp5 contract for Thames Water.

While the Irish operation’s focus for many years was specialist contracting in the gas, piling, industrial maintenance and steel fabrication areas this has evolved in the last five or six years.

The business has grown considerably in the five years since Murphy took over, with turnover increasing from around €50m in 2016 to an estimated €138m in 2020, around €20m of which was from exports.

The growth, says Murphy, reflects the improving economy and increased demand for contractors in recent years. “We’ve expanded to meet the need,” he says.

One of these expansions involved the acquisition of AECOM’s Irish DBO water business in 2017, which Murphy says has strengthened the company’s position in this area and set it up for further growth.

Murphy Ireland now has offices in Newbridge, Newry and Citywest and employs over 500 engineers, managers and operatives across the country. Key clients include Gas Networks Ireland, Irish Water and Aughinish Alumina. “We’ve been working with Aughinish Alumina in Limerick for over 40 years. We’re big into long term relationships and that’s about providing a good service to good clients.”

The company’s steel fabrication facility in Newbridge is responsible for a significant proportion of its export turnover. The plant manufactures a range of items, including steel bridges to support Murphy Group projects throughout the UK. “I get a great kick out of seeing a bridge being manufactured in Newbridge and it then being put up in Bolton or somewhere like that,” Murphy says.

The Irish operation is also building a new energy and recycling facility for Yorkshire Water and installing UV plants for South Eastern Water. “These are all designed in our office in Citywest.”

The positives of having such a large body of direct employees outweigh the negatives, Murphy says. “When we hire someone we look after them and they look after us and it gives us a great advantage on site. You’ve no real control over the quality of the work you do when it’s not delivered by your own people. If we train somebody today, that training is still with them in a year or five years’ time. We are very proud of our workforce: they have a fantastic skillset and attitude to work. The way they rose to the challenge of COVID was an inspiration.

“But it’s an expensive model because you end up carrying a lot of employees when there’s not much work on. You have to keep money aside for a rainy day to be able to afford to do that. But in the good times, we’re not scrambling for people.”

To date, the company has not experienced COVID infections on site. “From day one, we were wearing face masks and brought in temperature controls and cocooned people. We find the antigen testing really useful – we’ve done over 20,000 antigen tests and they’ve proven to be very accurate. We haven’t had false cases where someone has tested negative and then proved positive or vice versa.”

As regards his priorities, Murphy says making a profit is always high on the agenda for any company. Spiralling costs are making that ever more challenging. “Tender prices in Ireland over the last five years have gone up by 5% to 10% a year.

“We did a survey across the CECA of civil engineering contractors and the average margin added to tenders above overheads was 0.57%.  It’s not sustainable that margins are so tight. Such skinny margins cannot protect against change such as the cost of materials going up by so much. Labour is not going up by that much but it is going up. And it will go up further as demand increases.

“There’s a real misconception that tender prices going up means increased profits. An awful lot of our time is spent on trying to manage the commercial position on projects.”

Another priority is trying to provide people with sustainable employment. “The founding principle of the company is if we look after people they’ll look after the company. It’s not easy to do it considering how tight the margins are, but we’re focused on being careful and picking the right clients and the right projects, avoiding ones that are going to be high risk, avoiding clients that are difficult to deal with and have unreasonable conditions of contract, and then providing a good service. That creates a good environment for people to work in.”

Murphy is concerned about the fact that the industry is conflictive by nature. “The industry wastes an awful lot of time in dispute because of poor risk allocation and poor tendering processes. That can turn people away from the industry because it’s high pressure. As engineers we like building stuff, we like talking about quality and efficiencies. It’s very disruptive to spend a lot of time in conflict over money, trying to get paid for the work you do.”

The tendering process as it stands is particularly wasteful, he believes. “Contractors spend 1% to 3.5% of turnover on tendering. If a client gets 15 tenders to price a project, as we recently experienced, the industry has spent at least 15% on that project before it’s even started. That inefficiency gets lost, but there is only one source of revenue and that is our clients. It’s soul destroying to have that waste.”

He also believes risk allocation should be more intelligent. “There are some clever people on both sides of the fence who understand the damage that was done by the GCC form of contract. It’s pushed all the risk across to the contractors and has created bad habits as well. Why would a client waste money on doing a site investigation if ground conditions were the contractor’s risk? The concept was that clients would do really good site investigations which would reduce the risk to a negligible extent so when they passed the risk across to the contractor, he’d know exactly what the ground conditions were like. Unfortunately, the site investigations just got worse and worse as consultants’ budgets were squeezed.”

Murphy says the CECA is keen to improve the situation around tendering, contracts and disputes for everyone. “We need to work to create a more balanced contract so we can spend more time being productive and have a more collaborative approach to projects. An education is needed here, which we’re working on.

“We also need to promote the industry and show all the great things we do, improve contracts and procurement to avoid project overruns and all the negative publicity that creates. With the right work being done up front and proper predictions on the cost of projects we can set the budget at the right level.”

Ultimately, he believes the future is bright. “The opportunities out there at the moment are great. There are some fantastic projects coming into the country and we’d love to be at the forefront of some of the more exciting and challenging ones.”