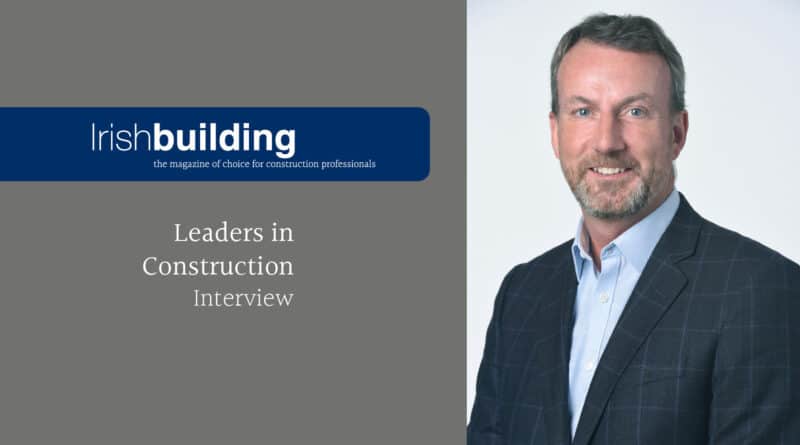 Micheál O’Connor, Managing Director of Dornan Group tells Irish building about his first year at the helm and the road ahead.

While it’s been a “curious” year and not quite the one he would have expected, Micheál O’Connor says his time since joining Dornan Group – essentially as Managing Director in waiting – has almost gone better than he could have hoped.

O’Connor had the strange experience of taking up his Deputy Managing Director role four days after the start of the first lockdown at the end of March 2020. “I have struggled with the fact that I haven’t met a whole pile of people face-to-face, particularly in our European business, but Microsoft Teams has been a really good second place,” he says. “I managed to get out to London last autumn and to the Netherlands in recent weeks and the ice had already been broken. It was very easy and very seamless to meet in person.”

Business for the Cork-headquartered mechanical and electrical engineering company over the last year has been very good, all things considered. The group employs 1,000 people and, outside the main Cork base, has offices in Dublin and London, together with project offices in Amsterdam, Copenhagen, Stockholm, Düsseldorf and Antwerp. Europe accounts for around 50% of the business, with the UK and Ireland bringing in around 25% each.

“We were nervous through the first lockdown as to how it would affect the business but we were fortunate in a lot of respects. England wasn’t overly impacted and Europe wasn’t affected at all. And in Ireland the sectors we’re in are primarily data centres, pharmaceuticals and so forth and those sites remained opened.”

In fact, last year’s turnover of €486m – up from €332m in 2019 – was the best in the history of the company. “It was a terrific performance across our various sectors and geographies.”

Credit for this performance goes first and foremost to the people working for the company, O’Connor says. “What they’ve endured over the last 12 or 14 months has been quite exceptional. When I travelled recently I had four COVID tests in four days. People on rotation doing critical business in the UK and Europe are doing that on a fairly regular basis.”

O’Connor says the company’s primary focus of the last year has been on taking care of the staff. “We put a huge emphasis on wellbeing throughout the course of the year. There has been a big mental burden on people. We made a big effort to reassure everyone that the business was strong and solid initially and then, as we started coming out of lockdown and restrictions and people got into their rotations and travel, we put a lot of importance on wellbeing.”

Revenue this year will not reach the same level as 2020 – O’Connor is expecting 2021’s turnover to be around the €400m mark. “That’s probably because of some of the lags we’re seeing on projects. While they may not have been impacted last year, some of them are going into this year. We consider that to be a temporary blip and still think we’ll have a very good revenue through 2021. We expect it to creep back up in 2022 and thereafter.”

O’Connor officially took over from Oliver Lonergan – Managing Director since 2006 – on the 31 May. “That’s when I stepped into Olly’s shoes and they’re big shoes to fill. His contribution to the business has been immense. Olly has a depth of knowledge around construction and building, particularly in the electrical and mechanical space, and has forged really strong relationships with key members of our team and key clients and that’s very evident to me. There’s an incredible warmness towards him.”

Lonergan will remain with the business as a director the next three years, focused primarily around the areas of tendering and estimating and project governance. “That’s a huge support to me because there’s still a lot I need to learn about the business. And he’ll continue to mentor and be supportive of others.”

Being able to work directly with Lonergan and the senior leadership team of Brian Acheson (CEO), Paul Flynn (Group Operations Director) and David Myers (Group Commercial Director) for 14 months while preparing for the role of Managing Director has been a huge advantage, O’Connor believes. “The leadership have been very welcoming and accommodating and have given me every support, advice and guidance. I was very keen coming in to tread very carefully. Dornan have something very special in their business. They have the secret sauce that has made the company so successful. I was loathe to do anything to undermine that.”

In terms of what he brings to the business, O’Connor says Dornan has been progressive on many fronts and he has sought to just add more impetus into some areas. Before joining the company he was with Jacobs, most recently as Vice President and General Manager for Ireland and Northern Europe.

“One of the areas I focus on in particular is safety. Dornan has an excellent safety programme as it is but I wanted to lend my weight to that and support and improve it where I could.”

“I’ve tried to strengthen our technology group. A lot of people in the company are entrepreneurial and I wanted to harness and bring a bit of focus to that. Likewise, I’m supporting our offsite manufacturing and the IT platform we have around managing that.”

With a background in life sciences, he also wants to bring greater focus to this side of the business. “And we’ve made some progress there and are on a good footing to expand in those areas.”

“One of the criticisms of the global industry is that it might be seen as lagging initiatives that other industries have embraced around technology, sustainability and so on. The construction industry has a way to go but I think people are genuine about wanting to change things and if the right efforts are put in place I think we’ll see significant improvements over the coming years.”

The company is also looking at diversity, and gender diversity in particular. “We’re supporting schools to make sure STEM subjects are made more attractive to students and to encourage a greater gender balance in the uptake of these subjects. And we want to support women in the industry. We’ve kicked off a Women in Dornan group across the group. We’re really looking to support gender diversity in the trades and in the professions.”

A couple of strategic hires have been made over the last year and more recruitment is on the cards over the next 18 months. “We’re very keen on getting like-minded people in the industry to join Dornan and to go on this journey with us. My primary role is to serve all the people in the business as best I can and to support them in being as successful as they possibly can be.”

But the key thing is to continue to grow while delivering excellence of service, he says. “That’s something I have been really impressed with in the company. There’s a really great desire and willingness to go the extra mile and do the best we possibly can do for our clients. For me coming into the business, that’s a great platform to start from – the right mindset is there already.”