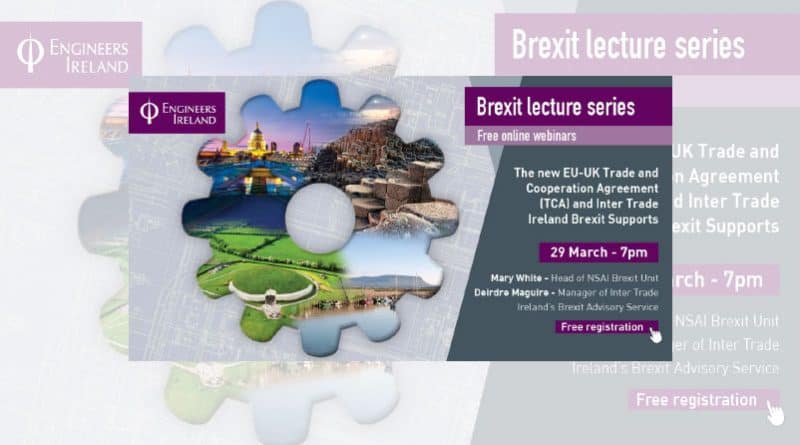 Engineers Ireland, the professional membership body for engineers in Ireland, has launched a new Brexit Lecture Series which will explore the impact of Brexit on engineering, business and trade in Ireland and the UK.

Commencing today, Monday, 29 March, the four-part lecture series of free evening webinars will be of relevance not only to engineers and business leaders on both sides of the Irish Sea, but also to those with an interest in Brexit and the new trade reality.

The first event in the series, hosted by Engineers Ireland’s North East region, will focus on the new EU-UK Trade and Cooperation Agreement (TCA) and Inter Trade Ireland Brexit Supports. Taking place online at 7:00pm this evening, Mary White, Head of NSAI Brexit Unit and Deirdre Maguire, Manager of Inter Trade Ireland’s Brexit Advisory Service will discuss the new EU-UK Trade and Cooperation Agreement and its impact on standards and conformity and outline the supports and advice available to business and individuals from Inter Trade Ireland.

Additional events in the series, taking place on a fortnightly basis, will concentrate on the Impact of Brexit and the Pandemic on Engineering in the North West, The Impact of Brexit on Cross Border Procurement and Supply Chains and Post Brexit Construction in Ireland and the UK.

Hosted by Engineers Ireland’s North West and Donegal regions and taking place online at 7:00pm 15 April, confirmed speakers for this event include Dr Brendan McCormack, President of IT Sligo,  Dr Chris O’Malley, Vice President of Research, Innovation and Engagement at IT Sligo and representative from Industry in the North-West.

The Impact of Brexit on Cross Border Procurement and Supply Chains

Hosted by Engineers Ireland’s Northern Region and taking place at 7:00pm on 29 April, this event will feature presentations by David Fry, Director of External Affairs at CIFNI and Consultant Frank Given.

Hosted by Engineers Ireland’s GB region, speakers from Enterprise Ireland will join this online event at 7:00pm on 13 May.

To register for this free series of events and for more information, visit: www.engineersireland.ie