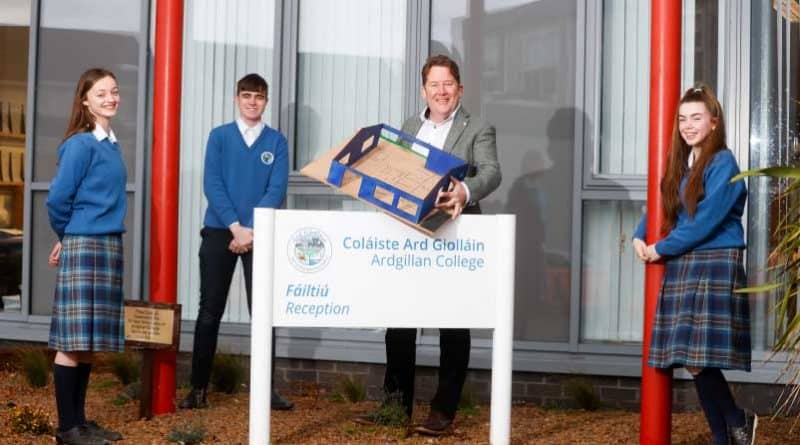 Ardgillan Community College in Balbriggan will be one of 50 schools from 22 counties nationwide to compete in the Construction Industry Federation (CIF)’s national competition for senior cycle students called ‘A Home for Everyone’.

Ardgillan College is a post-primary school serving the growing community of Balbriggan, County Dublin and the surrounding townlands. The college opened in 2009 and based in Castlelands, the school, under the patronage of Dublin & Dun Laoghaire Education and Training Board is a multi-denominational, co-educational Community College. It currently hosts and educates over 900 students.

This competition, aimed at Transition Year students, is a team-based project where students nationwide will work together to design a home that helps ‘solve’ climate change, the housing crisis and addresses inclusivity. The submitted designs will need to be eco-friendly, affordable and suitable for both elderly people and those with physical disabilities.

The competition will run until 1 March with judging taking place until mid-March. The winning team will have their design rendered into a three-dimensional model, so they can ‘walk’ through the house with a range of ambassadors, politicians, celebrities, parents and local councillors in March 2021.

In addition, the winning school will receive high-end measuring equipment, a laser level and a masterclass in the use of the equipment as well as wi-fi equipment. The winning team members will have the option of taking a CIF scholarship or access to the CIF apprenticeship programme if they do decide to take a construction-related career route in their future.

Increase in entries from All-Girls Schools

Since the competition launched, there has been an increase in entries from All Girls Schools, with entries from Sion Hill, one of the oldest girls’ secondary schools in Ireland and Alexandra College in Dublin.

According to a recent Department of Business, Enterprise and Innovation report, at the end of 2019, 205,400 people were employed in the construction sector, ranging in careers from construction, architecture, engineering services to utilities.

Recent CIF Research conducted nationally by iReach shows over 63% of parents would be happy for their children to pursue a career in construction. The majority of parents, (86%) believe people working in construction is critical to build the future.  Interestingly, over half of parents (54%) also believed the construction sector provides careers for women as well as men.

Commenting as he visited Ardgillan Community College to speak with students about their project Minister O’Brien said, “This competition is a great example of how we can harness the imagination and creativity of our younger generation in helping to solve climate change, tackle homelessness and improve diversity and inclusion in Irish society. It is competitions such as these which will spark interest and challenge young people to become involved in the construction sector and that can only be a positive development.”

The schools who have entered are: