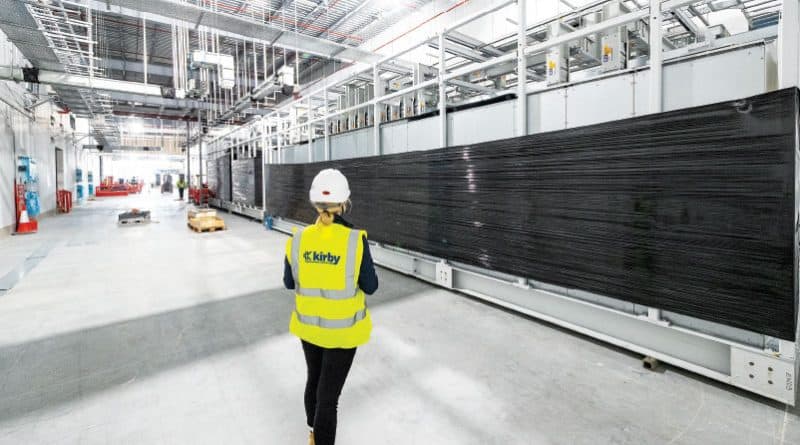 The data centre landscape is shifting. Persistent and growing demand for IT capacity requires rapid innovation in data centre project delivery. With over 175 zettabytes of data expected to be generated annually by 2025, driven by a growing demand and reliance on technology, data centre infrastructure will need to meet the demands for rapid deployment, flexibility, scalability and reliability.

One way Kirby is helping its data centre clients to meet these demands is through modularisation delivered with engineering excellence.

Kirby was appointed, based on the company’s reputation for engineering excellence, to deliver the full electrical and mechanical installation for a 60MW hyperscale data centre for a confidential client in Dublin, John tells us. “The client’s requirements in terms of speed to market and the scale of deployment drove the decision making towards modular construction. The client recognised that Early Contractor Involvement was essential to meet the challenging deployment dates, and this led to our appointment at concept stage.”

The concept design was developed with traditional construction methods in mind. Drawing on previous experience of delivering modular data centres, Kirby set about finding an effective solution to meet the client’s needs. “Kirby joined forces with its design and construction partners to assemble an experienced engineering team to review and maximise the potential for modularisation.”

A fully committed multidisciplinary team emerged consisting of the Kirby team, the general contractor, M&E consultants, structural engineers and architects. “We took a collaborative approach from the outset, engaging with the client continuously to ensure the ultimate solution was customised perfectly. There were a number of constraints, which were central to the decision making. The planning conditions associated with an existing footprint, which limited the available options. The time available to complete the detailed design and the availability of information on specialist owner furnished equipment.”

The internal electrical switchrooms were identified as the main focus for modularisation for a few reasons. The density of services was conducive to modularisation, the repetitive nature of the layout of the rooms and the amount of equipment on a relatively small footprint.

John explains how with the focus on the electrical switchrooms, Kirby committed to maximise the potential for modularisation.  “The team had previous experience with skidded solutions for individual pieces of equipment, but the objective now was to expand on this experience and construct fully modularised data centre switchrooms that fully integrated all of the equipment and was capable of being commissioned offsite.”

With the design partners and general contractor, Kirby utilised cutting edge digitalised engineering to maximise the rack count space available, allowed the required space for circulation corridors, equipment access and maintenance, and minimised the impact on the building construction sequence and phasing.

The ability to construct in a phased manner was critical to the client and Kirby’s solution had to allow the completion of phases without the potential of being impacted by the construction of future phases. “One of the benefits of modularisation is that the site construction can progress in parallel, instead of a linear dependent method. The overall detailed design of the MEP systems was progressing in parallel with the modularisation process.” 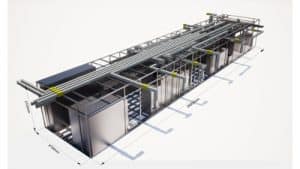 Once the MEP design was progressed to 90%, the detailed design of the modules commenced. Kirby contracted a well-established electrical manufacturing firm with significant modular construction experience, to fabricate the modules. “A module design was developed in a relatively short time, allowing the general contractor to progress with the recessed slab foundations in parallel with the manufacturing of the structural steel frames.”

During this period, Kirby held a series of intensive engineering workshops with the MEP designers and specialist vendors. John says this proved to be the most challenging stage of the project requiring precision engineering and close collaboration with stakeholders.

Critical decisions had to be made during this process he explains. “The number of modules required per switchroom, which was determined by the maximum dimensional limitations for transportation. How to design the service integration points between modules to minimise the work required on site. How to maximise the extent that testing and commissioning activities could progress in the fabrication facility.”

On a large-scale project such as this, it was vital that all milestones were met by eliminating waste, building right first time and allowing for a safe working environment for the whole project team. To help achieve this, John says, Kirby took on the role of lead coordinator allowing for detailed coordination and offsite fabrication.

MEP coordinators and BIM engineers worked as part of the construction team utilising 3D modelling of all MEP services. “Early engagement with the project team and the design team allowed Kirby’s BIM engineers to detail these services to LOD 500. All data was stored in a Kirby CDE where the latest information including the federated model, fabrication drawings and technical specifications could be accessed by the fabrication workshop, site teams and the client.” This access to live data helped the project team integrate more effectively and improved communication allowing for a lean workflow.

Once Kirby successfully completed the 3D coordination of services, the fabrication workshop could begin to manufacture the modules. The fabrication drawings were accessed through the CDE and once completed, a 3D point cloud scan was taken to ensure the accuracy of manufactured modules and that of the site conditions.

The modules were constructed inside in a controlled manufacturing environment minimising safety and quality issues that traditionally appear on sites. “This environment facilitated a much more efficient QA/QC process and ultimately enabled the execution of extensive level 3 testing and commissioning.” 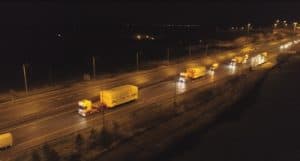 Following sign-off by all stakeholders the modules were prepared for transport and protected accordingly. The next challenge for the project team was to transport the mammoth skids. “Each component weighed in excess of 20 tonnes, 26m in length and 4.7m wide; the largest width allowable on Irish roads.  Transporting the skids from Derry to Dublin was a huge task that required significant planning and collaboration.”

On site, Kirby utilised robotic total stations to install the modules to the precise model coordinates. “These coordinates were taken directly from the federated model and automatically synced to the robotic total station eliminating any install errors.” To ensure that the site team had access to the Kirby CDE, John says, digital construction hubs were available to all teams on site. “These mobile units contained large screens, which could access the live federated model and all installation drawings. This process allowed the site teams to access live information which allowed them to build right first time thus reducing waste.”

Any variance of site install, which did not result in a clash, was then digitally redlined and issued back to the BIM engineers through the CDE using mobile technology and the digital construction hubs. The federated model was then updated allowing for all stakeholders to see the actual site conditions in real-time.

Entire electrical switchrooms were installed in a matter of days paving the way for the final hook-up of distributed services. “A total of 24 switchrooms have been installed, energised and undergone the final stages of commissioning.”

Modularisation minimises the impact on the construction sequence and enables efficient project phasing. Over 20,000 man-hours (15% of the project’s overall man-hours) of traditional construction activity was completed offsite, reducing on site management costs and increasing quality standards. The process utilises the latest digitalised engineering technology, that enables live information sharing, while the application of laser technology ensures complete accuracy of each single component.

Ultimately, modularisation promotes a collaborative approach, ensures the most effective long-term solution for the client and brings immense value by adding efficiency to project delivery.