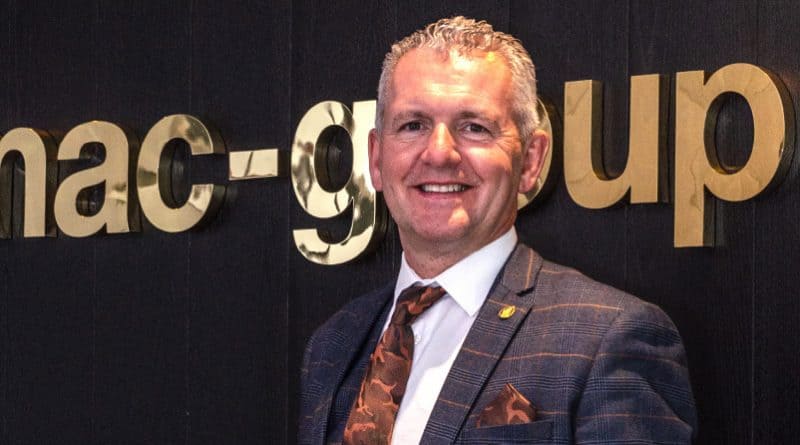 Newry based mac-group have reached another milestone as CEO Paul McKenna has been shortlisted in the International category for the EY Entrepreneur Of The Year 2019 Award.

Paul is among twenty-four finalists competing for the coveted title and one of eight in the International category. Now in its 22nd year, the awards programme aims to recognise some of Ireland’s most innovative entrepreneurs. Representing a full range of industries, the finalists collectively employ almost 13,000 people and generate annual revenues of nearly €1.2 billion.

Speaking about the nomination, Paul said “It’s a great honour. I think the programme really shines a light on the entrepreneurs we have within Ireland. It gives you great access to skilled and like-minded individuals.”

The event will take place today, Thursday the 21st of November, in the Citywest Hotel, Dublin and will be live on RTÉ Player at 6.10pm and air on RTÉ One at 11.15pm.

Paul has built his company up from one employee to the ninth largest Main Contractor in Ireland, with 212 employees across the UK and Ireland. Paul wears his leadership lightly; his staff have a direct line to him – they respect him and are mac ambassadors. He and his team listen to the clients, providing them with the service they need and questioning industry norms to achieve more efficient outcomes.

Paul has led the business through recession, cut margins and travelled to locations where existing clients had projects – across the UK and Europe – to ensure the company kept thriving. Since establishing mac-group, Paul has led the company to great success, winning numerous titles including: Fit Out Contractor of the Year for two consecutive years, ranked 58th in the Sunday Times UK Fast Track 100 (turnover growth), ranked 522 in FT1000: Europe’s fastest growing companies (turnover growth), ranked 14th in the Sunday Times BDO Profit Track 100 (ranking Britain’s private companies with the fastest-growing profits) and entered a Volumetric Modular JV currently in Manhattan building the largest modular hotel in the world.