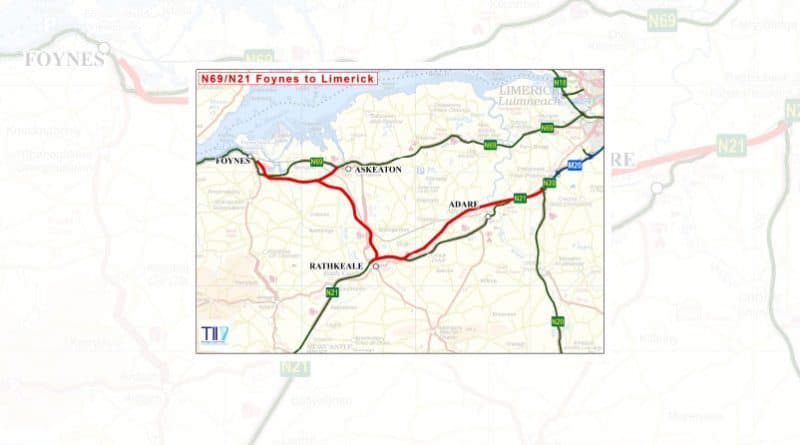 The Minister for Transport, Tourism and Sport, Shane Ross T.D., has announced Government approval for the proposed purchase of 41 additional rail carriages to increase capacity across the Greater Dublin Area rail network in addition to a €447m roads investment in Co Limerick.

Government approval to purchase the additional rail cars, at a cost of €150m, will see the carriages enter service in the Greater Dublin Area by 2021, providing 34% increased capacity at peak times.

In Limerick, a new roads scheme between Limerick and Foynes, including a by-pass of Adare village – home to the 2026 Ryder Cup – will now be submitted to An Bord Pleanála seeking planning permission. This proposed road scheme will deliver many benefits for the Mid-West region and for the Port of Foynes, which is a designated Tier 1 Port of national significance.  The reduction of congestion in Adare village is also a key priority. The provision of a high-quality dual carriageway link between Shannon-Foynes Port and the M21 at Rathkeale can facilitate further growth and expansion of the Port, leading to increased economic activity in the region and further employment opportunities.

Minister Ross stated: “Both of these projects are hugely significant and will deliver real benefits to rail commuters in the Greater Dublin Area as well as remove road bottlenecks and improve infrastructure in the Mid-West region.

In terms of rail, this Government is making major investments, including the National Train Control Centre, the improved programme of network maintenance and renewal and of course the DART Expansion Programme. We want more and more people to make the switch to sustainable mobility and to do that we need projects like this to expand the network and make it more attractive to use.

As part of our roads investment, I am very conscious of the need to ensure that our rural towns and villages are accessible and connected and that above all the road network is safe.  This Limerick  scheme will improve the lives of the many people living, working and doing business in rural Ireland.  This is also in line with the Government’s strategic objectives under the Mid-West Regional Enterprise Plan to 2020, which highlights the need for both the creation and enhancement of regional infrastructure so as to develop the region.”

The proposed expansion of the GDA commuter rail fleet will increase capacity by approximately 34% in the AM peak time across the Kildare Line, Maynooth Line and Northern Line. The additional carriages will be used with the existing InterCity Railcar (ICR) fleet resulting in longer train sets which can be used across the GDA commuter network, as well as providing additional services on the Maynooth and Northern Lines.

The project will be delivered by Iarnród Éireann and overseen by the National Transport Authority with funding provided as part of Project Ireland 2040.

Anne Graham, CEO of the National Transport Authority, said:“Today’s decision by the Government to give the green light to the purchase of 41 intercity railcars is to be welcomed. Public transport in Ireland is a success story, with the numbers of Iarnród Éireann passengers increasing every year since 2013. However, this has led to capacity becoming a real issue, particularly on commuter services. While it will take two years before any of these carriages enter service, customers will be reassured by the very fact that they are on the way.”

Jim Meade, Chief Executive of Iarnród Éireann said: “At a time when more and more commuters are switching to rail, this order of 41 additional carriages will bring a welcome boost in capacity for some of our busiest commuter routes. We are set to break the 50 million passenger journey barrier for the first time ever in 2019, and I welcome the commitment from Government, the Minister for Transport, Tourism and Sport, and his Department and the National Transport Authority to enable Iarnród Éireann to play the fullest role possible in meeting the transport needs of the communities we serve.  In addition, we continue to progress a major tender for the largest and greenest fleet in Irish public transport history, to allow us order up to 600 carriages over a ten-year period, under Project Ireland 2040.”

Michael Nolan: CEO of TII stated: “This is another very welcome road investment announcement and TII looks forward to working with Limerick County Council to progress this important project for Limerick, its surrounding towns and villages and for the Port of Foynes”.