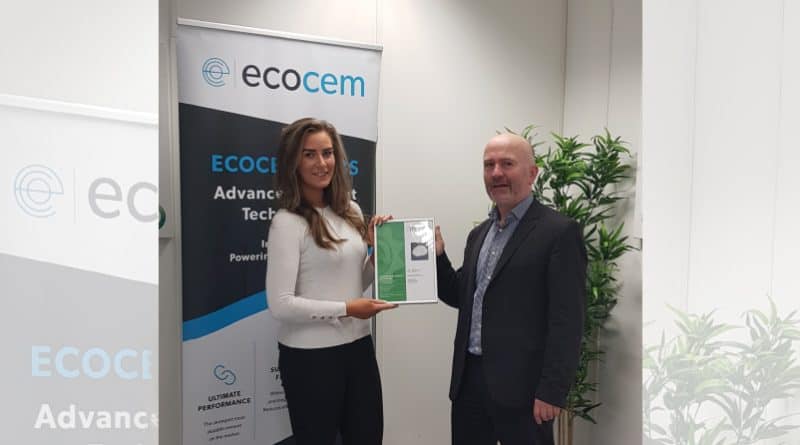 Ecocem Ireland recently published a revised Environmental Product Declaration (EPD) from the Irish Green Building Council (IGBC) for its low carbon GGBS cement. EPDs are third party verified documents prepared by a manufacturer to set out the various environmental impacts of their products in a clear and transparent manner.

Ecocem Ireland’s Ground Granulated Blastfurnace slag (GGBS) cement is the only cement verified with an EPD in Ireland and the UK. Ecocem strongly advocate transparency in terms of the environmental impacts of construction products. Ecocem Ireland published its first EPD in June 2014, which in the absence of an Irish-based EPD system, was certified in Holland for use across Europe.

In 2017, the IGBC began developing its EPD Ireland programme with the aim of establishing an Irish based EPD database, and in 2018 began publishing Irish EPDs. In 2019, when it was due for revision, Ecocem Ireland published their revised EPD on the EPD Ireland database. Ecocem already held the position as the lowest, independently verified carbon footprint for a cement in Ireland (42KgCO2/t) but further improved this position by approximately 24% in 2019, achieving a carbon footprint value of 32KgCO2/t. To put this in perspective, the carbon footprint for ordinary portland cement, the most commonly used cement, is approximately 900KgCO2/t (Ecocem’s GGBS being 96% lower).

The best means of reducing the embodied carbon of a structure is to understand the level of embodied carbon for each of the products specified in the structure. The most accurate, simple and effective way of doing this in Europe is to reference products published on certified EPD databases. Each product on the database is assessed under the EN 15804 standard and the resulting EPD verifies the environmental impacts of the product across a number of predefined categories. This system enables specifiers to simply search and compare products to ensure the best performing product can be established.

Ecocem Ireland produces cement known as GGBS (Ground Granulated Blastfurnace Slag) cement which is the best available technology for high performance low carbon cements. It has been used extensively in Ireland in projects such as the Convention Centre Dublin, Aviva Stadium and the Dún Laoghaire-Rathdown Lexicon.

Ecocem Ireland is a subsidiary of Ecocem Materials, who also own and operate plants in France and the Benelux region. Their annual capacity is 2.4 million tonnes and their cementitious products have been used in prestigious projects all over Europe such as the Tour Odeon in Monaco and Grand Paris in Paris.