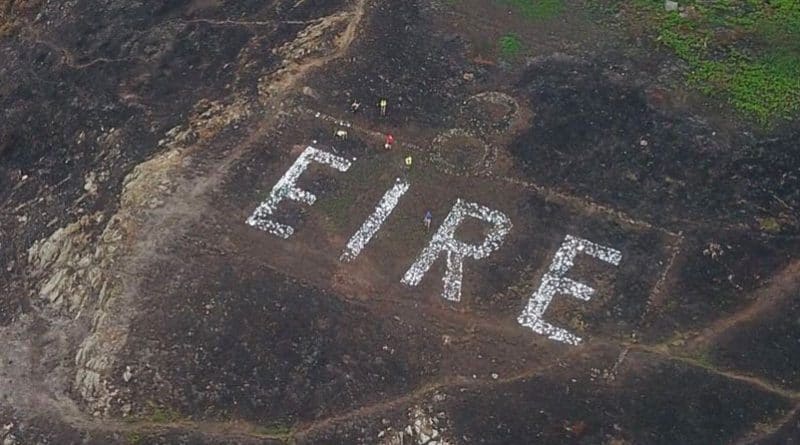 A World War II navigational sign has been restored to its former glory with a little charitable help from 100 litres of high performance coating, from global building product manufacturer Sika.

The large ‘Eire’ sign on Wicklow’s Bray Head had been gradually lost and forgotten over the years having been left to the elements. However the sign was spotted by a Garda Air Support Unit aircraft in early August after wildfires burned away a thick covering of gorse on the headland.

It is one of 82 ‘neutrality markings’ that were erected around the coast of Ireland during World War II. The markings acted as navigational aids for aircraft that were passing over the island and were part of Look Out Posts that were set up to help protect the country from invasion.

The sign is made out of around 40 tonnes of stones arranged to spell out the letters EIRE. The restoration was organised by local businessman Aidan O’Toole and three volunteers, including Declan Carroll, Managing Director at Sika Ireland.

The team spent the best part of a week cleaning the stones and cutting back gorse roots in order to restore the sign to its former glory. Many of the stones had moved over the years so the group spent a considerable amount of time rearranging them into their proper positions.

After fixing them into the correct place the group painted them with Sikagard 670W, a high performance, water resistant and weather resistant coating, manufactured and donated by Sika. Sikagard 670W is traditionally used for the protection and enhancement of exposed concrete structures. Being water vapour permeable and offering very good resistance against weathering and ageing whilst being easy to apply, it provided the ideal solution to bring the stones back to their former glory whilst providing a long term finish.

“I was delighted to be asked to get involved in this restoration project,” commented Declan Carroll. “It’s important that we maintain and remember our historical monuments, no matter how big or small they are. We could have simply whitewashed the stones but the product Sika has provided offers a finish that will ensure the stones need little, if any, maintenance for years to come, no matter what the weather throws at them.”

As well as the word ‘Eire’ the sign also features the number 8, which was its Look Out Post number. The volunteers plan to complete their renovations over the course of the next few weekends by fixing and painting the number 8 and the rectangular box that surrounds the sign.