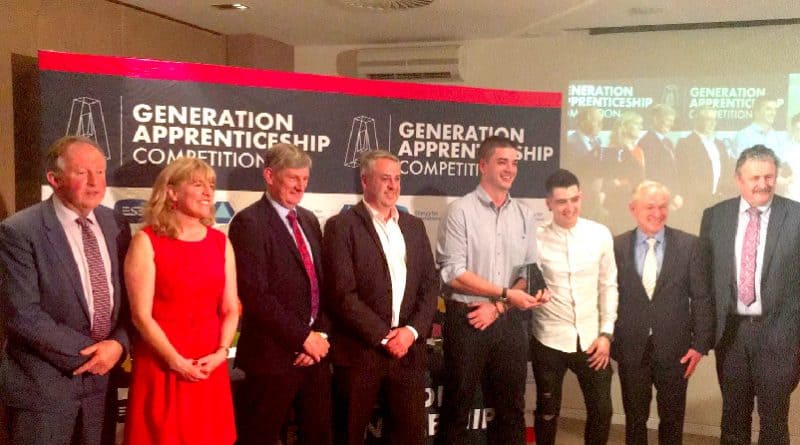 Mark Fitzgerald and Conor Cregan from Designer Group have won the first ever Generation Apprenticeship Competition which is an innovative national competition celebrating design, team-working and the problem-solving skills of Irish apprentices.

Their entry, which was a sustainable A, was made with various tools of their trade and incorporated a mini eco system which sustained a growing herb garden.
The competition, which is part of the Generation Apprenticeship campaign, involved teams of apprentices creating 6-foot, 3-dimensional A letters using a diverse range of design skills. 39 apprentices were chosen as finalists.

The teams were from:

Speaking at the awards ceremony in the Spencer Hotel, Dublin 1, Richard Bruton TD said “Developing pathways to education will be key to achieving our ambition to make Ireland’s education and training system the best in Europe by 2026. We as a Government are dedicated to developing apprenticeships and have committed to more than doubling the number of new apprentices registered to 9,000 by 2020 and expanding further into new areas. Budget 2018 allocated €122m to apprenticeship training, an increase of almost 24% to deliver on this goal.

Now more than ever there are really fantastic opportunities in Apprenticeship. Not only are we growing the traditional craft-based programmes after their demise during the recession but new industries are now embracing the apprenticeship model for the first time, giving people great opportunities to ‘earn while they learn’ in really exciting new areas.

The competition’s aim was to highlight the importance and value of apprenticeships as a route to skills development in 21st century Ireland. It also highlighted the strong tradition of craft-based apprenticeships and the new industries in which apprenticeships are now available, including advanced manufacturing, engineering, finance and hospitality.

In addition to receiving support from the Department of Education and Skills and SOLAS, the competition was sponsored by ESB and the Construction Industry Federation. An independent judging panel selected the winning entry with reference to the competition criteria of design skills, teamwork, critical thinking and problem-solving. On the panel were renowned Architect Dermot Bannon, Microsoft Ireland Services Director, Noreen O’Hare and CEO SOLAS, Paul O’Toole.

Speaking at the event, Pat O’Doherty, CEO of ESB said “This competition showcases the remarkable creativity and skills of apprentices from a diverse range of disciplines and backgrounds, and is proof that apprenticeship can be a route to skills development for all. I would like to congratulate all of participants and especially the award winners. Reaching the final of this competition is not just a recognition of the skills and workmanship of each apprentice, but also their initiative, imagination and ambition. These are the qualities that make great things happen and lead to outstanding careers.”

Congratulating the apprentices, Tom Parlon, Director General, Construction Industry Federation (CIF) said: “The Generation Apprenticeship competition has shone a light on the huge array of skills and talent that apprentices throughout Ireland are honing and developing every day. These young people will quite literally build the Ireland of the future and are such wonderful ambassadors for the many career options available outside of the traditional third level route. While the numbers entering apprenticeships are increasing, the construction industry is experiencing a great surge in growth and will need to take on over 100,000 skilled tradespeople by 2020 to deliver on current housing and infrastructure targets.”