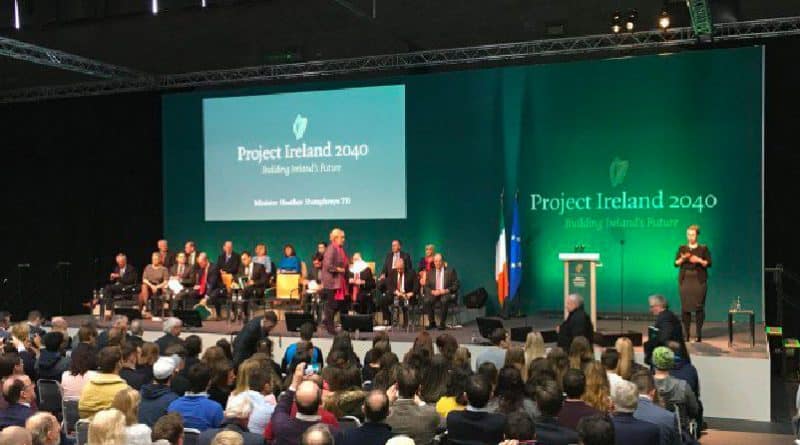 The Irish Construction Industry has welcomed ‘Ireland 2040’ but there are reservations about its evidence-based planning, in addition, there are worries about the availability of skills and the rise of construction prices. The merits of setting up the Construction Industry Group are appreciated, and a single infrastructure authority to streamline and prioritise projects is called for.

On the 16 February, the Government launched the new National Planning Framework – ‘Ireland 2040’. Ireland 2040 comprises of the Framework and a new 10-year €116 billion capital investment plan. Here we present the reactions from industry bodies as they gave their views on the details of the National Planning Framework (NPF) and their concerns for the future planning and provision of Ireland’s infrastructure.

The CIF welcomed the investment in infrastructure. CIF Director General, Tom Parlon stated that: “Today’s announcement could represent a game-changer for the construction industry, the economy and Irish society. The significant commitment to infrastructure and housing investment will enable the construction industry increase capacity significantly so as to deliver the essential housing, infrastructure and specialist buildings underpinning Ireland’s economic development over the next 25 years.”

Mr Parlon stated that implementation is now key. “Many of the projects outlined in Ireland 2040 will take a decade to complete. Forward planning and engagement must begin as soon as possible; this could be the difference between major projects starting in two years instead of five. Most of the projects outlined with be subject to public sector procurement timeframes which often take years instead of months to complete. The Government must now take this opportunity to modernise procurement practices to ensure value for money for the exchequer.”

The CIF welcomes the Government’s commitment to establish the Construction Industry Group to translate the ambition of the NPF. The investment Mr Parlon said “will give construction companies the confidence to invest in their businesses again. It will also provide confidence to the banking and investment sector so as to increase sustainable lending into construction projects again.”

The CIF expect to see significant increases in activity across all the industry sectors including civil engineering, main contracting, and housebuilding. The NPF and the investment in the ten-year capital programme they believe could kickstart construction activity in the regions.

Linking the National Planning Framework to ten-year investment programmes in the Public Capital Programme mirrors global best practice identified by the CIF in numerous submissions. The investment they say will yield significant economic benefits throughout Ireland and projects such as the M20 will ensure greater access to Ireland’s regions and enhance regional connectivity. The CIF said the industry “will be front and centre in the delivery of these ambitious plans and that it’s critical that we have a clear view of the project timeframes and progress over the lifetime of the capital programme. As a result, an infrastructure tracker is required to ensure the Industry can match capacity and investment Ireland’s changing economic and social requirements.”

The CIF believes more needs to be done to meet skills demands. “Currently the industry accounts for approximately 7% of GNP well below the 15% level that is considered sustainable for a growing economy as Ireland’s,” Mr Parlon said. “We, as an industry, and the Government will have to redouble their efforts to attract the thousands of workers required to fuel activity up to 2040.”

Engineers Ireland welcomed the publication of the National Planning Framework, calling it “a critically important framework for the sustainable development of our country over the next generation.” The organisation also strongly welcomed the joint publication of the €116 billion 10-year National Development Plan, saying “the alignment of spatial planning and investment is a vital step towards sustainable growth and effective investment.”

Caroline Spillane, Director General, Engineers Ireland, said: “Spatial planning and infrastructure delivery are important determinants of how we live, work and grow old. Yet planning in Ireland has frequently been inadequate for the country’s needs and based on a short-term and local view. Engineers Ireland has long advocated for planning that is evidence-based, long-term and divorced from the electoral cycle. We therefore welcome the 20-year approach taken in Project Ireland 2040 which will be central to enabling prosperity, wellbeing and long-term growth.”

Engineers Ireland believes the Government must establish a single infrastructure authority to oversee the implementation of the National Planning Framework and National Development Plan projects across Government departments and State agencies, allowing the integrated and streamlined delivery of priority infrastructure projects.

As construction prices hit 2008 levels, the Chartered Surveyors raised concern for the Capital Investment Plan with the worry of unsustainable price increases, regional disparity and capacity in construction. New figures from the Society of Chartered Surveyors Ireland indicate that construction tender prices will rise by 7% in 2018, bringing prices up to 2008 levels. The publication of the figures coincided with the launch of the National Planning Framework.

SCSI Director General, Aine Myler, described the increases as unsustainable and said they may hamper the ability of the present and future governments to deliver on the objectives outlined in the NPF. Ms Myler said: “These increases are being driven by a strong pipeline of work combined with an acute skills shortage, leading directly to increased costs. Development and construction companies are finding it more and more difficult to recruit skilled and unskilled labour. While specialist sub-contractor prices have been increasingly steadily for some time now, we are also seeing significant rate increases for traditional trades such as concrete installations, reinforcement and formwork. One other emerging challenge is the shortage of sites for the licensed disposal of construction waste. This is a particularly acute problem in Dublin and its immediate surroundings. This is also driving up construction costs and is unlikely to be resolved any time soon.”

She said the “Government needs to help push the construction industry to be more efficient and look at areas where it could be adding to those costs. Success is measured in what you build, not what you spend.”

Ms Myler also stressed that the Government needs to work with the industry to develop Brexit impact scenarios; and said the SCSI have seen the upside projections about increased demand for space, but restrictions on the movement of labour, currency risk and new tariffs on materials are all key issues that could quickly derail this NPF and the wider recovery.

Mr Joe Corr, President of the Irish Planning Institute (IPI), was speaking as the IPI responded to the publication. “Good planning is evidence based,” he said. “The framework proposed today sets out four cities and five towns outside Dublin as growth centres. That is one more than the eight gateway cities in the Spatial Strategy of 2002. The evidence of the past 15 years is that this didn’t work.”

Mr Corr added that ‘Ireland 2040’  is not following the evidence as hoped it would in order to become a robust enabling tool to shape and enable future investment in the growth of Ireland’s society and its economy by both public and private sectors. Mr Corr called for a priority in the commitment to an independent Office for Planning Regulation with legislative backing. He said that the IPI welcomes the NPF emphasis on reusing previously developed ‘brownfield’ land in both an urban and a rural context, he said: “Establishing some priority for brownfield over greenfield use is a positive way to addresses challenges to both economic and environmental sustainability. It serves to reduce sprawl, to increase the efficiency of land use and enables a more focused and efficient investment in infrastructure.”

Royal Institute of the Architects of Ireland (RIAI)

The RIAI welcomed the introduction of the National Planning Framework and highlighted that an investment “in quality architecture and urban design in realising these plans will have a positive impact on the economy and citizens of Ireland.” The RIAI said the level of social inclusion and the attractiveness of the country for Foreign Direct Investment through the creation of a quality built environment is vital to the success of the NPF.

In planning for the future, the RIAI said: “We must be both ambitious and realistic to ensure that public projects deliver guaranteed sustainable and long term value.” The organisation also stressed the need for cost effect delivery methods and quality outcomes, stating, “Ireland cannot afford to take actions that result in any poor quality development decisions. It is imperative that procurement, planning and regulatory systems are focused on championing quality in the built environment that positions Ireland as a leader in international best practice in sustainable, quality, value driven development.”