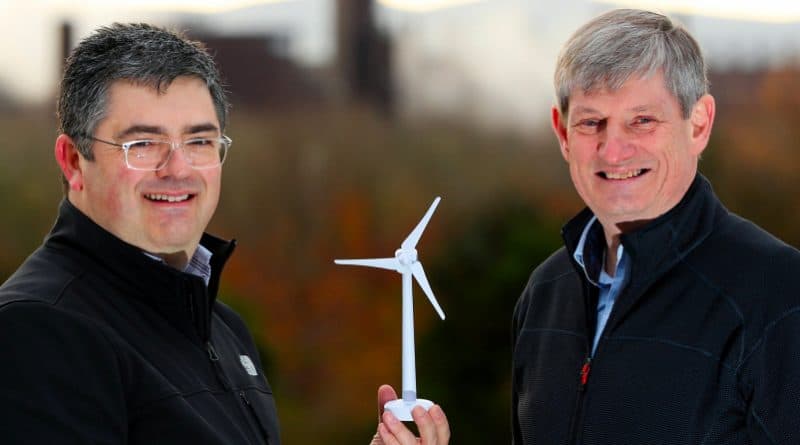 Intel Ireland has just announced that 100% of all electricity supplied to its Leixlip campus in 2016 was generated from indigenous renewable sources, making Intel one of the largest voluntary, private purchasers of renewable energy in the country.

This action forms part of Intel Ireland’s multi-faceted approach to reduce its impact on the environment and to support its commitment as a global energy sustainability champion.

Intel’s 360-acre Leixlip campus is home to one of the world’s most advanced manufacturing processes. Intel employs 4900 people in Ireland and has been operating here since 1989.

Since 2016, Intel Ireland has bought all of its power from its key supplier, Electric Ireland. Ireland is the first major Intel location outside of the U.S. to have bought 100% certifiable renewable electricity. Simultaneously, Intel has greened its energy supply in over a dozen major European facilities to 100%.

Speaking about the renewable energy purchase, Intel Ireland General Manager Eamonn Sinnott said; “We are very proud to be announcing today that 100% of all electricity supplied to our Leixlip campus is now purchased as renewable power from Electric Ireland. We are doing this as part of our multi-faceted approach to environmental awareness and as part of Intel’s commitment to being a global energy sustainability champion”.

“We hope that our decision to go green will help to further stimulate the renewable energy market and encourage other businesses to follow suit. The more participation in the green power market and the more additional capacity that can come on stream will ultimately further help the environment and help to lower costs”.

Electric Ireland is the retail arm of ESB, and ESB Chief Executive Pat O’Doherty was on hand today to welcome the announcement. “It is a genuine pleasure for ESB and Electric Ireland to partner with Intel – one of the world’s leading companies – so that it can run its Leixlip plants entirely on renewable electricity. When ESB was founded 90 years ago, 100% of the energy we generated was renewable, harnessed from the River Shannon. As we face into the energy challenges of the coming decades, this provides us with inspiration to play a leading role in Ireland’s transition to a low carbon future. The Electric Ireland agreement with Intel is an example of how we seek to place our customer at the centre of this low carbon future, powered by clean, reliable and affordable electricity”.

Guarantees of Origin are electronic certificates issued for energy generated from renewable sources. They ensure that the green attributes produced by a renewable source are actually generated, tracked, transferred to a single owner and then retired so they cannot be re-transferred which helps to stimulate the need for future renewable generation. Every GoO kWh is tracked and accounted for from its generation source. This mechanism is globally accepted in many forms or names but all serve the same purpose and generally similar rules.

The cost for green power is currently higher than the standard grid supply. Intel is supporting the purchase of the green power in order to continue to drive adoption and increased supply and to raise awareness of the issue. As the supply increases and technologies advance, Intel believes that renewables will be even more competitive and compelling than they are today.  This latest initiative is one of many actions by Intel to support energy sustainability and by doing so the company hopes to drive reinvestment and innovation which is vital for the continued drive towards a diverse, sustainable and strong energy supply.

Intel in Ireland is proud to be leaders in establishing the mechanism and philosophies to buy, through a regulated process, green energy with traceable attributes. Intel is committed to this philosophy now and for the future.

Intel Ireland’s Environmental leadership
Intel Ireland is committed to being a leader in environmental sustainability and has demonstrated this commitment to the environment since first establishing operations here in 1989. Intel Ireland is at the forefront of sustainable plant operations across Intel worldwide, voluntarily investing more than €35 million in energy conservation projects at the Leixlip site in recent years.

Reduction activities over the last four years alone have resulted in over 46,000 tonnes of carbon saved, equivalent to over 12,000 cars taken oﬀ the road. In 2015 Intel Ireland achieved a saving of 18,000,000 kWh through the implementation of projects such as heat recovery in the manufacturing area, data centre free cooling and conversion of pumps from fixed to variable speed drive. The Leixlip factory cleanroom heating systems are now is 30% more energy efficient.

Intel Ireland also supports a number of pilot projects to drive sustainability at its Leixlip campus, the most recent of which saw the first hybrid lighting poles installed which utilise solar panels and a wind turbine on each lighting unit to provide a fully sustainable and low maintenance lighting solution in the carpark area.

In the last 4 years, Intel Ireland has recycled 92% of solid waste and are close to achieving a zero chemical waste to landfill goal with 99% of all chemical waste going to non-landfill sources.

Intel Ireland is also committed to collecting input from local communities about environmental performance. Over the past number of years, Intel has supported major projects to improve a local amenity, the Rye Water, working to preserve and enhance its natural habitat. Since first establishing operations at the Leixlip campus Intel has been aware of the rich biodiversity and the significance of the Rye Water and its Valley.

In 2015 Intel launched the Pride of Place Competition which is aimed at supporting environmental initiatives that positively impact the neighbouring communities in North Kildare. The competition has since involved partnerships with the Tidy Towns Associations of Leixlip, Celbridge and Maynooth. Each was invited to submit three proposals for sustainable initiatives that would enhance the environment of their local community while also engaging people in the community on environmental matters.

Earlier this year Intel launched a new biodiversity report which proudly marked the achievement of becoming the first company in Ireland to use Business in the Community Ireland’s innovative Biodiversity Framework to shape its approach to biodiversity management.

Intel’s Global Commitment to addressing Climate Change
Intel Corporation has been engaged in actions and strategies for decades that reduce its carbon footprint and began to publicly report on greenhouse gas emissions many years ago. Intel has developed dedicated teams and actions to make significant investments in energy conservation, over $145 million since 2008, resulting in savings of 3.19 billion kWh which reduces its greenhouse gas emissions. The company have installed over 60 alternative energy supply projects including facilitating the construction of 40 on-site solar electric installations at Intel locations around the world.

Since 2008, Intel continues to be the largest voluntary purchaser of green power in the U.S., according to the U.S. EPA’s Green Power Partnership rankings. Intel purchased 3.4 billion kWh of green power in 2015, enough to meet 100% of its annual U.S. electricity use. In October 2015 Intel joined the White House Climate Pledge, a reflection of the company’s ongoing commitment to addressing climate change.