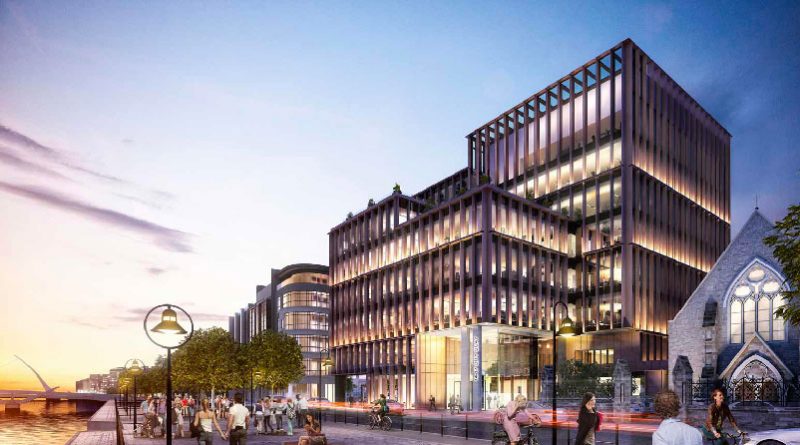 On completion, full ownership of the development will be transferred to Irish Life. This acquisition follows Irish Life’s recent purchase of Velasco on Grand Canal Street, another modern office building due for completion in the early part of 2017. TIO was represented by Fergus O’Farrell of Savills Ireland, while Johnny Horgan of CBRE acted on behalf of Irish Life.

The 118,000 square foot office building – which will be constructed by Bennett Construction – has been pre-let to Grant Thornton, one of Ireland’s leading business advisory firms. Up to 350 workers will be employed in the building’s delivery, which is due for completion in May 2018.

The project is part of The Reveal Developments which aims to highlight Dublin’s creativity, confidence, intelligence and connections to global business.

The City Development Fund is active in the development of a number of major commercial and residential developments in Dublin’s docklands. Last year, they pre-let, constructed and sold 8 Hanover Quay – now the flagship European headquarters of AirBnB .This was the first major pre-letting completed in the South Docks area during the current development cycle, with the Grant Thornton pre-letting on City Quay the second.

Justin Bickle, Chairman of TIO and Managing Director of Oaktree commented: “We are delighted to get the City Quay project off the ground and look forward to seeing it through to completion. The pre-let to Grant Thornton and pre-funding agreement with Irish Life is further evidence of the strong fundamentals in the Dublin office market. We have invested significant capital in Irish real estate in the past 5 years and continue to believe in Ireland’s economic growth prospects and job creation opportunities.”

Irish Life has been investing in the future of Dublin’s office stock through both development and refurbishment projects, the most recent being its acquisition of Velasco, Grand Canal Street, Dublin 2.Irish Life also acquired Hume House, Ballsbridge for a price in the region of €35 million, and is currently developing 1GQ at Georges Quay and a refurbishment at 2-4 Merrion Row. This commitment by Irish Life is a signal to the strength of the market both currently and in the short to medium term. Overall, Irish Life has been very active in the Irish market over the last four years having acquired €1bn of direct property.

Martin O’Reilly, Head of Property at Irish Life commented: “We are very pleased with the addition of 13-18 City Quay to our portfolio of prime Dublin City office properties. Upon completion 13-18 City Quay will be a state of the art office building offering an environmentally sustainable and energy efficient work environment. The acquisition through forward funding of this core pre-let development nicely complements the high quality office stock in our portfolio, which has been reinvigorated through new acquisitions, refurbishment and development through the current cycle”.