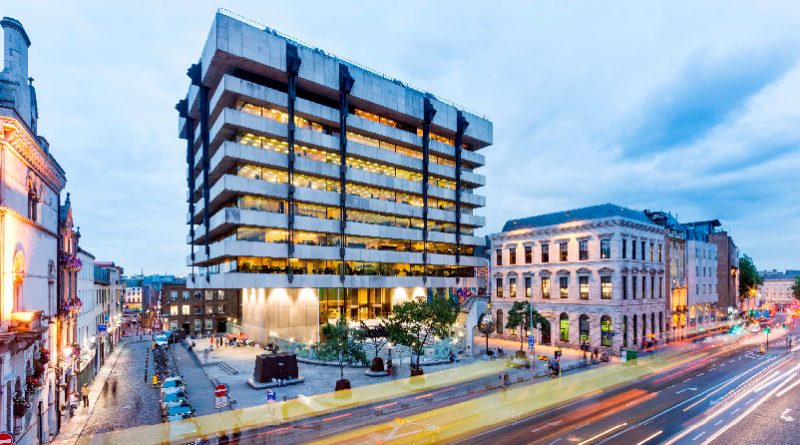 The Central Bank of Ireland properties on Dame Street and College Green will be launched to market today.

The properties are to be offered for sale in three separate lots through estate agents Lisney.

The first lot is likely to be of significant interest to local and overseas purchasers and comprises the iconic Tower building, an ancillary Annex Building and The Commercial Buildings. All of these buildings were constructed as part of the 1970s development which was designed by renowned architect Sam Stephenson.

The Tower building is one of Dublin’s most recognisable buildings and has been described by Archiseek.com as a ‘highly assertive building with a bold outline and dramatic styling’. Its construction was somewhat unusual in that it was built using a cantilevered system located on top of the twin reinforced concrete service cores with each floor suspended from the twin cores by 12 external supports. The floors including all services were built at ground floor level and subsequently hoisted into place. Internally the Tower building is somewhat dated and it’s likely a new owner would at a minimum undertake a substantial refurbishment.

The second lot is a charming and attractive five storey over basement period building at 9 College Green which was rebuilt by the Sun Fire and Life Assurance Company in 1908. The building contains many original features including curved balconies with wrought iron balustrades, clerestory feature windows, decorative ceiling finishes, mahogany panelling, some marble flooring and marble stairs. Unusually the building also benefits from a lift.

The final lot is 6/8 College Green which sits on the site of the original Jury’s Hotel and was built around 1980. This provides a modern six storey over basement stand-alone office building of 23,029 sq ft (net including storage/ancillary accommodation) that benefits from dual frontage to College Green and Anglesea Street in Temple Bar.

In anticipation of the sale the Central Bank has commissioned a number of technical due diligence reports which will be made available to potential purchasers. Amongst these is an indicative master plan for the buildings which has been prepared by Henry J Lyons architects. This shows a possible en-livening of the plaza area with more associated amenity and retail space. Another option which may be considered by potential purchasers is conversion into a hotel. Given the impending pedestrianisation of College Green, it is anticipated there will be increased focus on retail uses at street level. With this in mind, the buildings’ location on the edge of Temple Bar and in close proximity to Trinity College will be perceived as immensely positive and it is likely creative developers will be keen to buy the buildings.

Three videos have been created to showcase the properties. Click the link below to view.

The properties are to be sold by best bids with formal offers due by 19th October. Given the unusual nature of the properties and the array of uses/potential purchasers there are no asking prices. Nonetheless Lisney anticipates bidding will be in the region of €65m for Lot 1, €2m for Lot 2 and €14m for Lot 3. There is also the possibility a single purchase could buy all lots estimated to be approximately €80m

James Nugent of Lisney would not speculate on the future use but did state that ‘the new owners would have a unique opportunity to shape the future use of an important and vibrant part of Dublin city centre’ given the shortage of quality office accommodation of scale available for occupation in the city centre and the significant architectural importance of the Tower building’.y 1,400 people across 5 buildings in three separate locations (Dame Street/College Green, Spencer Dock and Iveagh Court).