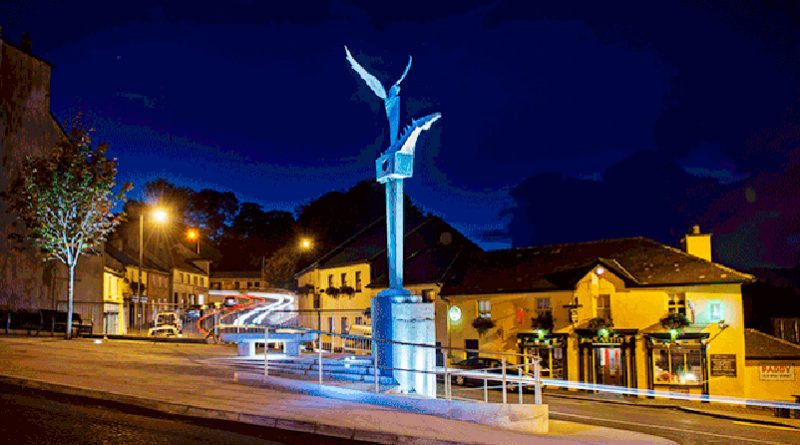 The Royal Institute of the Architects of Ireland (RIAI) has announced Public Space & Sculpture, Westport by Town Architect Simon Wall, Architects Section, Mayo County Council, as the Winner of the Public Choice Award in advance of the 2016 RIAI Irish Architecture Awards this Friday, 25th June, at the Royal Hospital Kilmainham, when the full list of winners in 17 categories will be revealed.

Town Architect Simon Wall, Architects Section, Mayo County Council outlined in their submission that the Public Space and Sculpture were commissioned by Westport Town Council to celebrate Westport being ‘conferred’ by the Irish Times as the ‘Best Place to Live in Ireland’. The sculpture called ‘The Sentinel’ by artist Ronan Halpin was the outcome of a national sculpture competition. The Public Space was designed by Westport Town Architect, Simon Wall, MRIAI to celebrate the piece and integrate it into the townscape, while resolving a difficult junction between two streets.  The Public Space and Sculpture has become an important landmark within the town and is used as a gathering point for public events and socialising.

Now in its ninth year, the popular RIAI Public Choice Award gives the public the opportunity to have their say by voting for their favourite shortlisted project.  The Public Choice Award received over 14,000 votes – the highest number of votes in the history of the Public Choice Award. Public Space & Sculpture, Westport won the majority of votes followed by Hollyhill Library in second place designed by Cork City Architect’s Department, and Mallow Urban Heritage Masterplan – Phase 1, Thomas Davis Square in third place, designed by Mallow Town Architect, Giulia Vallone and Cork County Council Architects Department. The RIAI Annual Awards are supported this year by Gerflor flooring company.

Speaking on Morning Ireland, Carole Pollard, President of the RIAI, said, “We were delighted to see such an extraordinary diverse range of projects entered into the 2016 RIAI Architecture Awards – which showcases the best in Irish Architecture.  The awards celebrate Irish Architectural excellence and Public Space and Sculpture in Westport is bringing people together as well as celebrating Westport’s win as ‘Best Place to Live in Ireland and we congratulate Simon Wall Architects Section, Mayo County Council and Westport Town Council for that.  This year we are particularly delighted to see public amenities and buildings – a public, social space; a library and a town place – being recognised in Mayo and Cork. These are spaces everyone can enjoy, interact with and appreciate and the demonstrate the wider contribution made by architects to our built environment.”