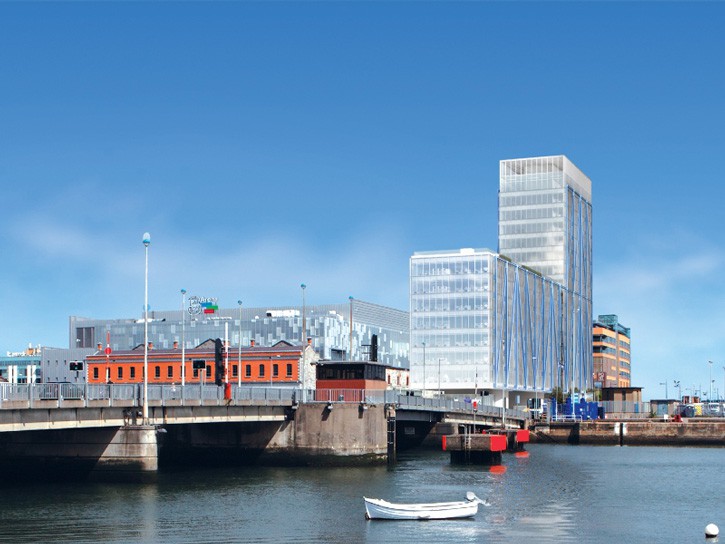 Joint Receivers Stephen Tennant & Paul McCann of Grant Thornton have just announced that planning permission for ‘THE EXO’ – a 224,500 sq. ft. office building at the Point Village in Dublin’s Dockland’s – has been approved by Dublin City Council.

At 73 metres high, THE EXO will become Dublin’s tallest commercial office building and could accommodate up to 2,000 office workers. The planning application was funded by NAMA as part of its overall commitment to facilitate the delivery of new development within the provisions of the Dockland’s Strategic Development Zone (SDZ) as approved by Dublin City Council and An Bord Pleanála.

Stephen Tennant from Grant Thornton commented; “Dublin City Council’s decision to grant planning permission for the development of THE EXO is great news for the North Docklands and Dublin as a whole. The SDZ process introduced by Dublin City Council and An Bord Pleanála has enabled us to secure approval for THE EXO in just over 6 months, which proves the initiative is working. We now look forward to bringing these plans to life and delivering a quality office scheme to meet the strong demand for office space in Dublin.”

The Point Village is one of only a handful of locations where taller buildings are permitted in Dublin. The Exo, which is designed by Irish architectural practice Shay Cleary Architects, responds to the design brief set out in the SDZ Planning Scheme and reflects the importance of this site within the wider Docklands. Construction will take approximately 24 months – creating over 350 jobs in the process. The overall development construction cost will be in the region of €80m.

Roland O’Connell, Chairman of joint letting agents, Savills Ireland, commented;“The Point Village has witnessed a significant increase in footfall over the past few years. As a result, numerous high-profile office occupiers and retailers have been enquiring about accommodation at the Point Village. The proposed construction of The Exo in addition to other planned development – will only serve to increase that demand.”