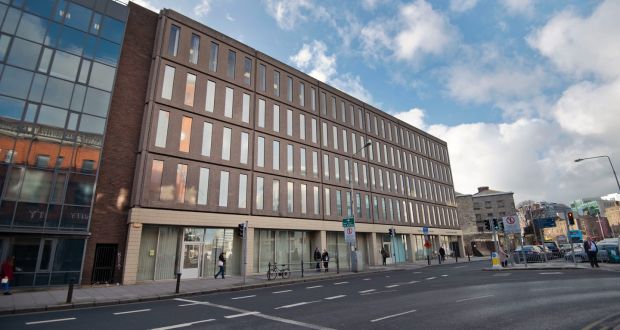 Trinity College has been given a green light to proceed with the development of a €52m student accommodation project Pearse Street in Dublin.

The scheme calls for the demolition of the five-storey Oisin House, which is adjacent to Trinity, and the construction of a seven-storey, 13,800 sq m development that will house 278 student accommodation units.

In the planner’s report for the project, DCC expresses some concern over the shape of the proposed redevelopment, particularly from certain parts of campus and Pearse Street. It cites views like the one below as showing an example of that, though says CGI images do not give a proper understanding into how the building with fit with campus.

It recommends that a scale working model of the development be constructed in order to assist with a “fuller understanding” of how the building would look.

An Taisce in their submission to DCC objected to the proposed development, stating that the intention to expand the size of Oisin House was “not necessary or desirable.”

DCC also requested that College clarify the conservation plan for the Printing House,currently the Department of Electronic & Electrical Engineering, to ensure its future within the campus.

Built in 1734 by architect Richard Cassels, the Printing House is listed as a protected structure under the Local Government (Planning and Development) Act 2000.

The proposed construction of the 13,825.4 sq.m. building is, according to An Taisce, “[an] exercise in floor space maximisation at the expense of an area of great historic, architectural and civic design sensitivity.”

College intends for the new Oisin House development to provide accommodation for 278 students, along with space for the relocation of some sports facilities, the College health centre and the College disability service. Last month Trinity News reported on plans to provide facilities for DU Rifle Club in the basement of Oisin House, a measure which caused some concern among board members.

On 10 December last year, the deadline for lodging planning observations and objections against the project passed. Two objections from Trinity alumni were received by DCC, one stating that “the height and mass of the building are totally unacceptable in such close proximity to the Trinity College main campus”, with the other declaring the building “a monstrosity”, and threatening to “withdraw from Trinity alumni and fundraising activities if the project proceeds.”

Speaking about objections to the project to Trinity News at the time, the dean of students professor Kevin O’Kelly stated that “while two outside parties made comments we are confident we can address their concerns. It is particularly gratifying that no concerns were raised from the surrounding community.”