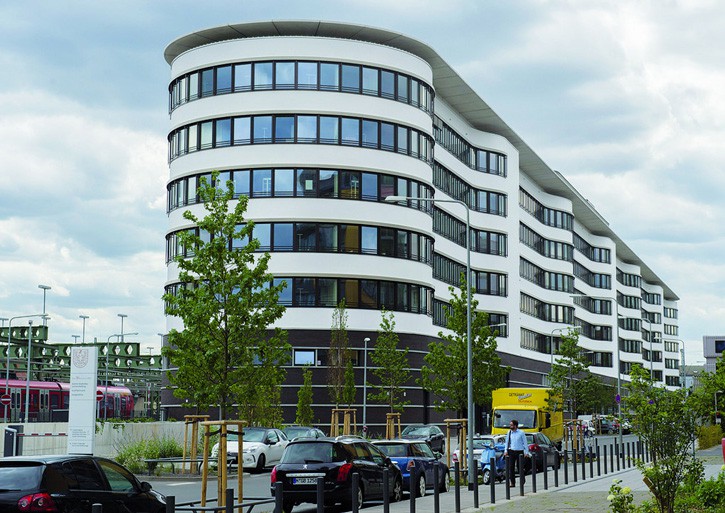 Curved façades, but a straightforward energy concept: a new office building in Frankfurt, Germany, clearly shows the potential of sustainable building design, with an architectural style that is not only elegant but also intelligent.

The result is a 90 percent reduced heating demand and perceptibly increased comfort due to high indoor air quality. The building thus meets with the criteria for the Passive House Standard; the corresponding certificate was presented to the building owners this Thursday. Details of the energy efficient solutions for the building services and building envelope will be discussed in April during excursions as part of the International Passive House Conference 2016.

The building, which is being used by the Frankfurt City administration, consists of two parts from an energy point of view: the actual office area on the five upper floors has a heating demand of just 15 kWh/(m2a), while the thermally separate floors below consist of workshops and a car park. The energy demand of this area is very low as well, because Passive House components were consistently used in its construction.

The “central workshop and administrative building <http://www.passivhausprojekte.de/index.php?lang=en#d_4524> ” (ZWuV) is located, visible from far away, close to Frankfurt’s main railway station. Thereby, the triple glazing all throughout the building provides not only thermal insulation but also ensures the necessary protection against noise. As a special architectural feature, some of the triple glazed windows are even curved. The ventilation systems with heat recovery are mostly located on the roof, which also has a large terrace with a view of the Frankfurt skyline.

Heat distribution within the building takes place primarily via concrete core activation, supplemented with radiators for peak loads and comfort control. Conversely, the concrete core activation system is also used for cooling. Completed in early 2015, the building has stood the test already: whether in the hot summer or on cold winter days, the indoor temperatures remain between 20 and 25° C.

How the Passive House Standard manages to bring together maximum energy efficiency and highest demands for user comfort will be one of the major topics at the International Passive House Conference 2016 <http://www.passivhaustagung.de/en> , to be held on 22 and 23 April in Darmstadt, Germany. Conference attendees will also be able to visit exemplary Passive Houses in the region. In addition to this administrative building in Frankfurt, a Passive House building of the Hessian Ministry of Finance in Wiesbaden, the Passive House City district “Bahnstadt” in Heidelberg and many other projects will be part of the excursion programme.

The project developer and building owner of the new office building in Frankfurt is a project enterprise of Groß & Partner Grundstücksentwicklungsgesellschaft mbH and Lang & Cie. Real Estate AG. The architectural services were provided by Schneider & Schumacher. As for the energy efficiency, the Passivhaus Dienstleistung GmbH and the Passive House Institute provided consultancy and the subsequent certification. The building is housing the Department for Roads and Infrastructure, the Parks and Open Space Department and the Department of Energy of the City of Frankfurt am Main.