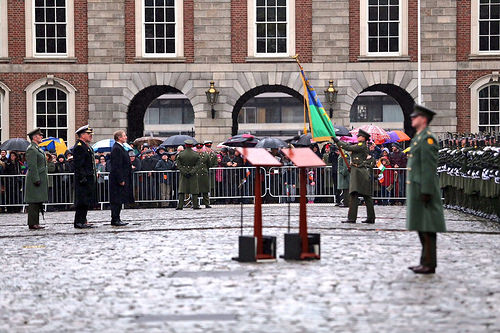 President, Michael D Higgins and Taoiseach Enda Kenny have lead the first State ceremonial event to mark the beginning of the centenary year, as part of the Ireland 2016 Centenary Programme.

A flag-raising ceremony was held in Dublin Castle on the 1st of January, while Arts Minister Heather Humphreys hosted a special Peace Proms concert in the Convention Centre, featuring over 500 young performers from across the island of Ireland.

Throughout 2016, more than 40 State ceremonial events will be held as part of the Ireland 2016 Centenary Programme, as well a growing list of more than 4,000 events nationwide, including 2,000 community-led initiatives and over 1,000 international events being held primarily through our embassy network.

The flag-raising ceremony which took place in the Upper Yard of Dublin Castle comprised of two main elements:

The ceremony concluded with the playing of the Reveille and the National Anthem.

There are some moments in history when a seed is sown and the old order changes forever.  Easter 1916 was such a moment and, from the very early days of this State, it has been the moment we have chosen to commemorate as marking the birth of our sovereign Nation.  Today, we begin our Centenary Year with this special ceremonial event, which marks the start of our year of remembrance and reflection of these key events in Ireland’s history.  2016 belongs to everyone on this island and to our friends and families overseas.  It is an invitation to join us in remembering our past, reflecting on our achievements over the last 100 years and to re-imagine our Republic for future generations.