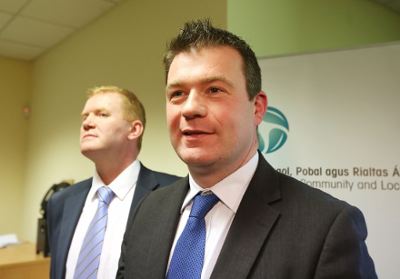 The Government has approved the publication of a package of legislative and policy reforms by both ministers Alan Kelly TD, and Paudie Coffey TD, which the Government hopes will address past failures but more importantly ensure that Ireland is prepared for the planning and development challenges of the future.

There are three key elements to the package approved including:
·        Publication of an Independent Planning Review Report of planning practices and procedures in six local authorities;
·        Publication of a Planning and Development Bill which, amongst other matters, will provide for the establishment of an independent “Office of the Planning Regulator” to maintain a constant watch over the general systems and procedures employed by planning authorities, including An Bord Pleanála and to examine and report on the content of development plans, including zoning practices of local authorities;
·        Publication of arrangements for the preparation of a National Planning Framework as the overall strategic planning and development strategy for the country, including regional and local level planning and to be adopted by Dáil Éireann in line with provisions of the Planning Bill.

At the launch of the package, the Minister for the Environment Alan Kelly T.D. stated that:

“The planning process is constantly in the public eye and for good reason because good planning is critical to meet our needs in economic, environmental and social terms. However, we know that the system needs to be enhanced through both effective oversight and clearer long-term thinking, which is why the Government has today approved my proposals in relation to publication of the Planning Review Report, new planning legislation to establish an independent Planning Regulator and arrangements for the preparation of a new National Planning Framework to set a path for development for the next 20 years. We have an historic legacy of poor decision making, of questionable zonings which have resulted in some communities living in places they shouldn’t be. These reforms will ensure that public good will trump the interests of greed in all future planning decisions,”

Planning Review Report
MacCabe Durney Barnes were appointed under section 255 of the Planning and Development Act 2000 in February 2014 to undertake an independent planning review of the performance of planning functions having regard to specific planning issues raised in respect of the six planning authorities (Carlow, Cork, Galway and Meath County Councils and Cork and Dublin City Councils) and of the organisation and of the systems and procedures used by them in relation to their functions under the Act.

The report found that all the complainants raised issues of public interest and as such have served the common good in raising these matters.  It also highlighted that the planning authorities reviewed have, by and large, and over a period of time, responded positively in addressing the issues identified.   The Independent Review has made 29 recommendations across the planning system and relate to proposals for legislative changes, improved Ministerial guidelines and advice.

The independent Review Report has not found that the planning system is broken or fundamentally flawed from a legislative and policy framework perspective, but that certain systems and procedures need to be reviewed and enhanced to achieve the standards of transparency, consistency and accountability that a modern society expects and that is what the Government will focus on.  By and large these can be addressed through circulars and guidance rather than legislation, albeit there are some legislative proposals upon which the Minister will advance following consultation with the Attorney General.

Minister Kelly also today published a report outlining steps to be taken in the implementation of all 29 recommendations by legislative, regulatory and policy level changes. Commenting on the publication of the Review Report and Departmental implementation strategy, Minister Kelly stated that:

“The Independent Planning Review Report has identified areas for further improvement of Ireland’s planning process and I would like to thank both the consultants for their in-depth probing and analysis that is evident from this comprehensive report and the persons and authorities who were involved in the Review. The Review Report is the culmination of a long process in coming to independent conclusions and recommendation that I firmly believe will lead to further improvements and enhancements in the openness, transparency, effectiveness and accountability of our planning system.”

“Publication of the Review Report on top of the previous Mahon Tribunal Final Report marks a new departure as we continue to focus on further reforms of our planning system and ensure that it is meeting the needs of a fast resurgent economy and in a way that learns from the past and operates in the interests of the common good and which has the full confidence of the public.”

Both the Independent Planning Review of The Performance of Planning Functions having regard to Specific Issues raised in respect of Six Planning Authorities – Final Report by MacCabe Durney Barnes and the Response of the Department of the Environment Community and Local Government to the Independent Planning Review, will be available on the home page of the Department’s website: http://www.environ.ie/en/DevelopmentHousing/PlanningDevelopment/Planning/LatestNews/

Planning and Development (Amendment) (No.2) Bill 2015
The primary purpose of the Bill is to provide a legislative basis for the establishment and operation of the independent Office of the Planning Regulator (OPR) which was the main recommendation of the Mahon Tribunal of Inquiry into certain planning matters and payments.   Under the provisions of the Bill, the OPR will be:

–         fully independent of the Department in its day to day operations;
–         responsible for the independent assessment of all local authority and regional assembly forward planning, including the zoning decisions of local authority members in local area and development plans, to ensure compliance with relevant national and/or regional policy;
–         empowered to review the organisations, systems and procedures used by any planning authority or An Bord Pleanala in the performance of any of their planning functions under the Planning Act, including potential systemic risks of corruption and on foot of individual complaints from members of the public; and
–         enabled to drive a national research, education and public information programme on proper planning and sustainable development, and to highlight the role and benefit of planning.

“In establishing the OPR, the primary aim of the Government is to ensure proper oversight over the systems and procedures used by planning authorities in the performance of their planning functions and one that will ensure public confidence in the delivery of quality evidence based outcomes”, stated Minister Kelly.

“In particular, the OPR will be mandated to ensure that appropriate independent controls are applied in the drawing up of local authority development plans with the overarching objective of contributing to and overseeing proper planning and sustainable development, the optimal functioning of a robust and transparent planning system, and so that the failings of the past in the planning system are not repeated in the future”, continued the Minister.

Minister Coffey added “This is the most important point that needs to be made. We have all seen the legacy issues associated with the adoption of poor and insufficiently robust development plans in previous decades, including the excessive over-zoning of land for housing in certain areas with significant negative consequences and impacts. We are now firmly addressing these issues having regard to the recommendation of the Mahon Report and with a view to putting in place a planning system that is fit for purpose and appropriately positioned to meet the challenges of a modern and recovering economy”.

National Planning Framework
The Government believes that as the recovery takes hold, the time is now right to start planning for a better future and to put in place a workable National Plan to ensure that Ireland becomes an even more attractive place in which to live, work, visit or do business.

“Developing a new National Planning Framework in 2016, a century on from the Rising that led to the building of our nation will be a fitting demonstration of Ireland’s capacity to plan ambitiously but realistically for our future”.

The National Planning Framework will replace the National Spatial Strategy (NSS) which dates from 2002.  The new framework will address both the challenges and opportunities required to create more dynamic cities, towns and rural communities to ensure that through good planning:

As the highest level planning policy document for the country, the new Framework will provide a long term vision to guide future development and investment decisions and will also co-ordinate new regional assembly strategies and local authority county development plans.

Anticipating the preparation of the new framework, Minister Kelly stated that:

“We all know that successful places are usually well planned places, therefore as we have recovered from the brink of collapse and are now enjoying the fruits of sustained efforts to recover, we need to put in place a workable, high-level National Plan building on our own planning successes, including regeneration of many parts of our bigger cities and the vibrancy of towns that have become tourism, heritage and investment hotspots”.