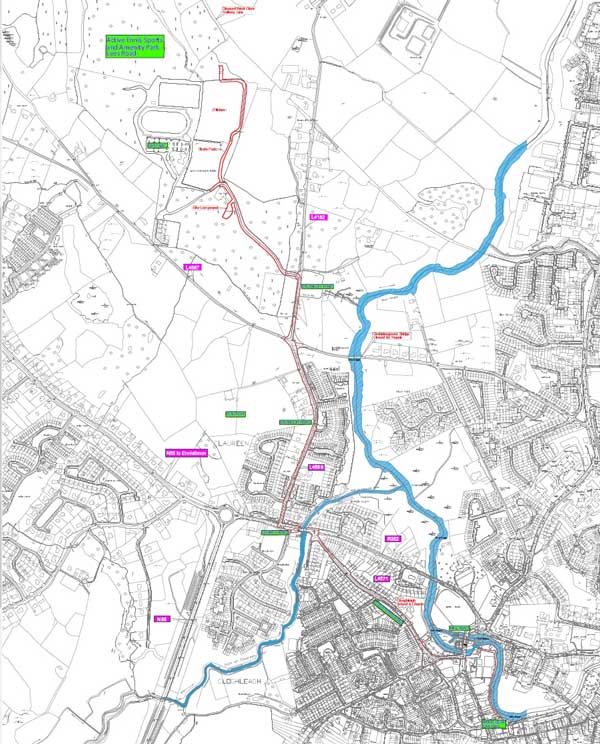 Works have commenced on the Phase 1 Contract 1 of the West Clare Railway Greenway project, a 42-kilometre cycling and walking route linking Ennis to Lahinch, via Corofin and Ennistymon, along the route of the dismantled West Clare Railway says Clare County Council.

The project will include off-road bi-directional cyclepaths/footpaths via the rededication of existing roadway, crossing the River Fergus at a number of locations on widened paths.

The initial Contract of the project, which is the subject of €192,707 in funding from the Department of Transport, Tourism and Sport, is expected to take approximately 10 weeks to complete. Wills Bros Limited is undertaking construction works on behalf of Clare County Council.

Phase 4 has already been constructed and links Ennistymon to Lahinch via a 3-metre wide off road cyclepath/footpath with cycle stands and route information boards at three locations.

“Once completed, phase one of the West Clare Railway Greenway will serve as an important piece of recreational infrastructure for the people of Ennis and surrounding areas, as well as a tourism attraction for those who visit the town,” stated Cllr. James Breen, Cathaoirleach of Clare County Council.

“I want to acknowledge the Council for its work in progressing what would be, once completed, a fantastic world-class off-road recreational path similar to the ‘Great Western Greenway’ in Mayo,” he added.

Cllr. Pat Daly, Mayor of Ennis stated: “The first phase of the cycle and walking track will not only serve as a multifunctional route helping to attract tourism, but it will also serve as a commuter and recreational route for the people of Ennis and its environs. The linking up of the town centre to Active Ennis Sports & Amenity Park Lees Road will be of particularly benefit to the people of the town.”

Tom Coughlan, Chief Executive of Clare County Council commented: “The West Clare Railway Greenway will form part of the National Cycle Network and once completed, it will connect up with many existing and planned routes such as the Wild Atlantic Way, the Eurovelo routes for Ireland, the Doolin Cycling Hub, the Cliffs of Moher Coastal Walk, the Mid Clare Way and the Burren Way.”

“It is anticipated that design work on Phase 2 of the West Clare Railway Greenway from Ballymaquiggin to Corofin will commence later this year,” added Mr. Coughlan.