The UCC Beaufort Building in Ringaskiddy has been officially opened by An Taoiseach Enda Kenny T.D. the project, built by JJ Rhatigan & Company, will provide Ireland with world-class infrastructure for renewable energy and maritime research to power the ‘blue economy’.

Speaking at the official opening, An Taoiseach Enda Kenny, T.D. said, “Marine research and development is a part of this Government’s plan to rebuild a sustainable enterprise based economy. Our seas will increasingly support more jobs, enterprise and research. The UCC Beaufort Building, while firmly rooted on dry land, is a vessel of scientific discovery for our seas. Its world class facilities will attract world class researchers and new entrepreneurial endeavours in the maritime and energy sectors. The spirit of collaboration between academia, private enterprise and the Irish Naval Service in Irish maritime research is a model for public – private partnerships not only in Ireland, but globally.”

“Excellence in science and in its exploitation for the benefit of society requires excellent infrastructure.  For decades, UCC has been a global leader in marine energy research.  The Beaufort building now provides the world class infrastructure necessary to exploit that science to deliver technologies for society.  With its wonderful design and state of the art equipment, the building will host academic and industry researchers working in partnership to grow our marine economy,” said UCC President Dr. Michael Murphy. 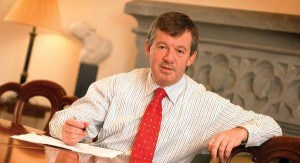 “Progress is driven through vision and creativity. In 015 we celebrate the 200th birthday of our Professor of Mathematics, George Boole, who created the logic enabling all digital technology of our Information Age.  Today we celebrate Francis Beaufort, the hydrographer from Meath.  And we celebrate the genius of those who envisioned this marine centre of excellence in the “Maritime Quarter of Ireland” being realised through these wonderful new facilities – the best in the world,” he added.

Led by Professsor Conchúr Ó Brádaigh, Director of MaREI, the centre will cater for 135 researchers, industry partners and support staff, dedicated to solving the challenges related to marine renewable energy, the multi-disciplinary centre has already secured €30 million in funding through Science Foundation Ireland (SFI) and contracts with industry partners comprising of multinationals and SMEs.

The MaREI centre will form a critical piece in the Ireland Maritime Energy Research Cluster (IMERC) environment, which includes the National Maritime College of Ireland (NMCI), Cork Institute of Technology (CIT) and the Irish Defence Forces.  Having recently announced over 90 new jobs as a direct result of foreign direct investment, IMERC has been very successful in attracting international companies in the area of ocean energy and maritime research as well as driving indigenous entrepreneurship in the maritime sector.

The wave tanks in the Beaufort Building are capable of producing actual waves of up to 1.2 metres high, which are equivalent to the 30m+ waves experienced in extreme conditions off the west coast of Ireland and in the Atlantic, and will be used extensively by LIR, the National Ocean Test Facility located in the Beaufort Building.

Construction began at Beaufort in 2013, when An Taoiseach officially turned the sod on the building exactly two years to the day of the official opening on 11 July 2015. The ambitious development was led by UCC Capital Projects Officer Niall McAuliffe and employed more than 200 people on site. Designed to resemble a naturally eroded cliff face with incredible sea views, the architects on the project were McCullough Mulvin and the civil and structural engineers were ARUP.  The main contractors appointed were JJ Rhatigan who won the contract by competitive tender process. Planning permission for the development was granted in December 2012.

The Beaufort Building, located adjacent to the National Maritime College of Ireland, is a major extension of the University’s Environmental Research Institute (ERI) and will be UCC’s flagship presence on the IMERC Campus. The facilities comprise a 2,600m squared tank-hall which will house four different wave tanks and a suite of electrical test infrastructure, alongside scientists and engineers engaged in cross-disciplinary research covering a range of fields such as Marine Renewable Energy, Marine and Coastal, and Sustainable Energy Research.

The Beaufort Building construction is funded by the Higher Education Authority (HEA) and Bord Gáis Energy (BGE) through the PRTLI 5 Programme, the Department of Communications, Energy and Natural Resources, The Department of Agriculture, Food and the Marine on a site provided by the Industrial Development Agency (IDA) facilitated by the Port of Cork.  Recurrent funding has been provided by the HEA and BGE also under PRTLI 5 and the Glucksman Foundation in UCC. Subsequently the test facilities of the Building were significantly augmented by capital awards from Science Foundation Ireland (SFI) and Sustainable Energy Authority of Ireland (SEAI).