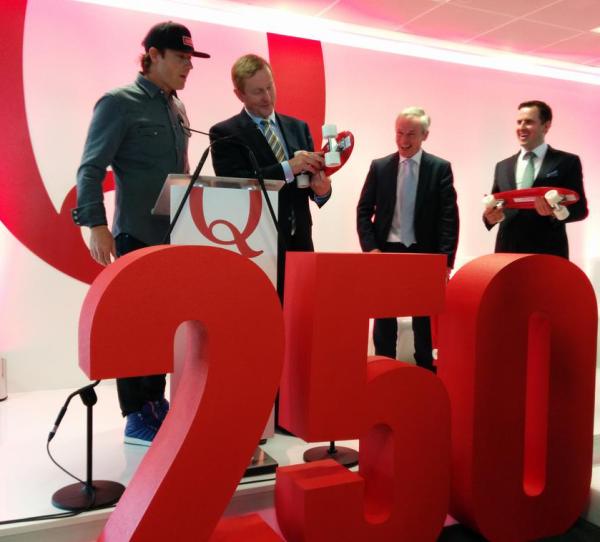 Qualtrics the world’s leading insight platform, today announced it will create a further 100 jobs in Ireland bringing the total number of employees at the company to 250 by the end of 2016 – exceeding its original target of 150 jobs.

Qualtrics has been supported by the Department of Jobs through IDA Ireland.

Speaking at the official opening  today, Taoiseach Enda Kenny T. D., said, “The creation of 100 new jobs in Dublin by Qualtrics is great news for Ireland’s reputation as a location for young, innovative digital companies.  These new jobs will contribute to the goal of the Government’s Action Plan for Jobs to create 100,000 new jobs by 2016.  When Qualtrics first decided to establish its operations in Ireland, it did so because of the talent available here, Ireland’s pro-business environment and our proximity to European markets.  This has proved to be a winning combination over the past 18 months with the company planning to further expand its headcount to 250 jobs by 2017.”

Welcoming the investment, Richard Bruton TD, Minister for Jobs, Enterprise & Innovation said: “The tech sector is a key area which we have targeted as part of our Action Plan for Jobs, and in the past four years we have put in place a range of new measures to support growth in this area. Less than two years ago we were at Qualtrics to announce the creation of 150 jobs – today’s announcement that they will exceed that target and create 100 extra jobs is very welcome news. I look forward to working with Ryan and his team as they roll out this project”.

“Our experience of doing business in Europe from our Irish base has been phenomenal,” saidRyan Smith, CEO Qualtrics who travelled over from Utah with his family for today’s announcement. “The market response to our technology has been hugely positive and our sales teams are now working with customers  in 16 languages across European markets including Ireland and the UK.  We’re ahead of our business targets and as a result we’re on track to increase our workforce to 250 by the end of 2016 This is because our insights platform is helping companies to make the right business decisions based on voice of the customer data.”

Qualtrics, which was founded in Utah, is one of the fastest growing tech companies in the US and closed a $150 million Series B financing round.    Qualtrics was co-founded by CEO Ryan Smith in 2002.  Today, it is one of the fastest growing technology companies in the world. The company works with top brands across every major industry including Kelloggs, Stanford University, Yankee Candle, HP and Cisco.   The Qualtrics platform is used by enterprises, academic institutions, and government agencies to collect, analyse, and act on the voice of the customer, allowing organisations to understand and measure customer satisfaction, and to  test brand, market and product concepts with their customers.  Qualtrics is also used by companies to undertake employee engagement programs, and manage employee feedback.  Qualtrics is investing in Europe to meet the growing demand for business insights in the region; Ireland is Qualtrics first international office and the company also has offices in Seattle, Dallas and Sydney, Australia.

Welcoming the announcement Martin Shanahan said: “Ryan has been hugely complimentary of his staff here in Ireland – he’s spreading the word on why Ireland is a great place to do business. For us in IDA Ireland, the value of endorsements from CEO’s like this cannot be overstated. Qualtrics choice of Dublin as their European Headquarters is yet another top level endorsement from a rapidly growing company on the tech scene. From their office here in Stephen’s Green, they will be able to deliver top level service to their European customers.“

Qualtrics is actively recruiting for its sales, support  and technical teams as well as graduates from the science, business and mathematics disciplines.  “Anyone looking to work with an innovative fast growing company on data insights will love working at Qualtrics,” said Dermot Costello, Qualtrics Ireland. “We provide a great opportunity for candidates that are looking for an energetic environment to grow their career in a rapidly expanding market.”

For information on a career at Qualtrics in Ireland please go to www.qualtricscareers.com