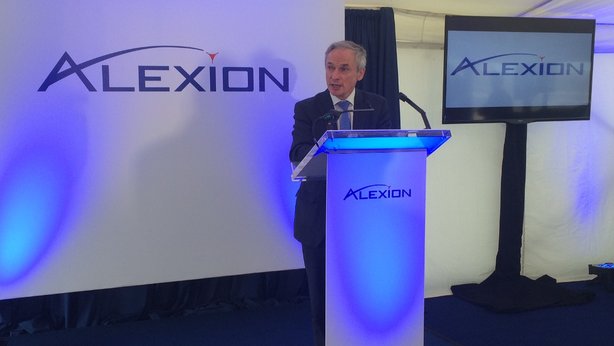 Alexion Pharmaceuticals has just revealed its plans to significantly expand operations in Ireland with the  construction of the Company’s first ever biologics manufacturing facility outside the United States.

The €450 million, four-year project, which will be constructed at Alexion’s College Park site in Blanchardstown, is expected to create approximately 200 additional full-time jobs on completion, which will bring Alexion’s total workforce in Ireland to almost 500 employees.

Since first entering Ireland in 2013, Alexion has invested €130 million in two facilities – a vial fill-finish facility in Athlone and a Global Supply Chain facility at College Park. Phase 1 of the College Park facility, comprising Global Supply Chain HQ, laboratories, packaging and warehousing operations is expected to be operational by year-end. Approximately 560 construction workers are involved in the development of the current Athlone and College Park projects, and the planned expansion of College Park will also create over 800 construction jobs.

Alexion has worked closely with the Department of Jobs and IDA Ireland on the development of its operations in Ireland.

Julie O’Neill, EVP Global Operations, stated “Alexion is pleased to progress the development of our College Park facility with a significant expansion that will now include our first biologics manufacturing facility outside the United States. This project further underscores our commitment to Ireland and is enabled by our ability to recruit highly competent and professional personnel to support the production and distribution of our medicine, Soliris, and our strong pipeline of biologics medicines. Alexion has a unique mission to develop life-transforming therapies for patients with severe and life-threatening ultra-rare disorders. We are already serving the very few patients in Ireland suffering from two very rare and devastating diseases; with this major expansion, our Irish operations, comprising biologics manufacturing, vial fill-finish and global supply chain, will be at the forefront of this vital work globally.”

Welcoming the announcement, Tánaiste and Minister for Social Protection Joan Burton TD stated “Alexion’s latest expansion is an extremely strong endorsement for Ireland, and Dublin West in particular, as an attractive location for high-end investment from the pharmaceutical industry. It underlines the jobs-led recovery that is underway, with 90,000 jobs created and the Live Register down by a third since the peak of the crisis. We are determined to maintain this progress into the future. As Tánaiste and Social Protection Minister, my Department stands ready to assist Alexion with their recruitment needs, in particular through our Employer Engagement Unit.”

Speaking at College Park, the Minister for Jobs, Enterprise and Innovation Richard Bruton TD said “Biopharma is a sector which we have specifically targeted as part of the Action Plan for Jobs, due to the large potential for employment growth which it offers Ireland, and we have taken a number of steps to support the growth of this sector in Ireland. Today’s announcement by Alexion is a huge boost for west Dublin and the whole country, and huge credit is owed to Julie and her team as well as the IDA. Employment will be provided for 1000 extra people, and the knock-on impact of this massive €450 million investment for the wider economy will be enormous. We are developing a powerful cluster of biopharma plants in Ireland which I am determined now to build on.”

Commenting on the investment Martin Shanahan, CEO, IDA Ireland said: “This is one of the largest investments in healthcare in the history of the Irish state – putting an additional €450 million into a site is a real statement of intent from Alexion. Alexion have rapidly grown their headcount and functional responsibility over the last year. IDA Ireland will continue to target blue-chip life-sciences companies like Alexion in the coming years and capitalise on Ireland’s position as one of the top destinations in the world for pharmaceutical companies”.

Alexion currently employs a staff of 170 and growing across its facilities in Athlone and its temporary offices in Park West Dublin. Since first entering Ireland in 2013, Alexion has invested €130 million in two facilities – Athlone (€55 million) and Phase 1 of College Park (€75 million). The development of Athlone and Phase 1 at College Park will see approximately 300 people employed directly by Alexion by the end of 2016. If granted permission, Phase 2 of College Park is expected to take four years to complete.