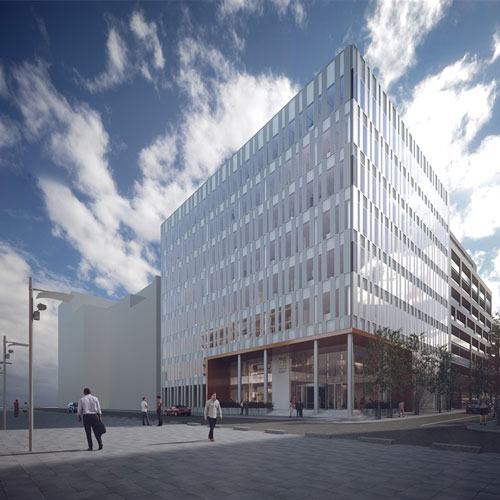 Funds managed by Los Angeles headquartered alternative investment manager, Oaktree Capital Management, L.P. (“Oaktree”), Irish-based property and construction organization Bennett Group and NAMA have invested together in the South Docks Fund (the “Fund”) of Targeted Investment Opportunities plc (“TIO plc”), an umbrella fund with segregated liability between sub-funds of which Oaktree Capital Management (UK) LLP is the Investment Manager and Bennett Property Limited is the Asset Advisor.  TIO plc has been regulated by the Central Bank of Ireland since 2 July 2013. TIO plc submitted planning applications to DCC last December on behalf of the Fund.

Justin Bickle, Chairman of TIO plc and Managing Director of Oaktree commented: “We are delighted with the decision by DCC to grant planning approval for TIO plc at 5-6 Hanover Quay and 76 Sir John Rogerson’s Quay in the Silicon Docks. The purpose of designating the area an SDZ was to facilitate fast track planning applications for much-needed commercial and residential development – this proves that the system is working well in practice. We now look forward to bringing these plans to life and ensuring the area remains a thriving hub for foreign direct investment.”

Roland O’Connell, Chairman of Savills Ireland and Ronan Corbett, Director, DTZ Sherry Fitzgerald – who have been appointed as joint letting agents – commented: “Demand for office space in Dublin’s Docklands is at an all-time high. Since December – when both planning applications were submitted to Dublin City Council – we have received numerous enquiries from both local and international office occupiers actively looking to establish or expand their presence in Dublin. This demand underpins the importance of the SDZ and the approval of both applications just 4 months after they were submitted is a very positive sign for future development.”

Brendan McDonagh, Chief Executive of NAMA, said: “This is an important step in delivering a project that will bring much-needed quality office space and residential accommodation to the Docklands and deliver a commercial return for the taxpayer. It highlights the benefit of the SDZ designation and faster planning process in delivering high-quality projects quickly”.

Paul Clegg, Executive Manager, Planning & Property Management with Dublin City Council commented: “The Docklands SDZ, approved by Dublin City Council members and passed by An Bord Pleanala, is now delivering on the promise of a new fast track planning process for new housing and commercial developments to meet the needs of the City, in the heart of the Docklands.  DCC will also be leading investment in the area to provide high quality new public spaces, transport links and amenities for Docklands to support the achievement of the vision of a vibrant sustainable new maritime quarter in Dublin.”

The properties subject to the approved planning applications are:

76 Sir John Rogerson’s Quay, Dublin 2, will comprise 9,300 sq. m. of office space and 58 one-, two- and three-bedroom apartments located above ground level. Separate office, retail and café units will be located at ground floor level offering active frontage onto the future ‘Chocolate Park’ which is due to open next summer. The Park – which is situated between Hanover Quay and Sir John Rogerson’s Quay – will provide a new leisure space for workers and residents at Grand Canal Dock.

5 Hanover Quay, Grand Canal Dock, Dublin 2, will provide 18,000 sq. m. of office space and 100 one-, two- and three-bedroom apartments in the form of a u-shaped block connected to the eastern side of the office building. At ground floor level, there will be a mix of leisure, café, retail and own door office units. The residential element of the building will also have prime views towards Grand Canal and the future Chocolate Park.