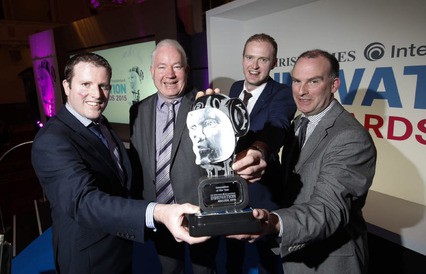 Mayo firm PanelDuct has won the overall ‘Innovation of the Year’ award at The Irish Times InterTradeIreland Innovation Awards 2015.

PanelDuct is a groundbreaking product which is set to revolutionise the installation of ventilation ducts in major building projects nationally and internationally, significantly cutting both the parts and installation costs involved.

The company which is based in Ballinrobe took first place in the ‘Manufacturing’ category and went on to compete against five other category winners to win the top award.

As overall winner, PanelDuct will receive a communications and advertising package from The Irish Times worth €150,000, along with a UCD Smurfit Business School scholarship for an Executive Education programme commencing in 2016 and a state of the art laptop.

The Innovation Awards were attended by Northern Ireland’s Minister for Enterprise, Trade and Investment Arlene Foster at a ceremony with over 220 guests at Belfast City Hall at the weekend.

PanelDuct provides an ingenious one step solution to the installation of ductwork. Traditionally this is manually fabricated in a workshop and shipped to the site. It is then installed in bulk format before being wrapped with insulation and externally cladded for protection. That’s three separate and costly operations.

By contrast, PanelDuct is pre-insulated in an automated process; it is supplied in modular flat panel format to minimise transport costs and it is installed in just one operation as the panels click together onsite. Furthermore air tightness is assured due to integral compression seals.

Conal O’Neill the company’s Research and Development Manager said that the response to the European launch of PanelDuct at a recent trade show in Frankfurt was overwhelmingly positive.

“From the launch we now have firm leads for distribution and sales in over 50 countries. We are currently negotiating distribution agreements with major wholesalers across Europe and the Middle East. Our main challenge now will be meeting that demand. While we currently employ four people, given the success of our European launch  we intend to employ 10 more before end of the year and a further 20 next year” O’Neill said.

The winners of the other five categories, who will receive a €10,000 Irish Times media package and an i-Pad, are:

The ‘Best North/South Collaboration’award went to BFree Foodsfrom South Dublin. BFree was nominated for its wheat free fajita kits which it claims are a world first. After carrying out some market research BFree decided to branch out from bakery to create the first ever allergen free Fajita Kit that is also only 127 calories per serving – a healthier, convenient alternative to the traditional category.

InterTradeIreland Strategy and Policy Director Aidan Gough congratulated the award winners and praised the very high standard of entrants in this year’s awards.

“Across all sectors, innovation gives companies a competitive advantage and opens up new opportunities for them.  We know that innovative companies generate growth and create jobs and that is why it is so important to foster a culture of constant innovation. We look forward to following the future success not just of our winners, but all of the nominees and the pioneering companies which entered the competition.”

Michael McAleer, Innovation Editor, at The Irish Times, said, “Year after year, it’s tremendous to witness firsthand the creativity, the skills and the dedication which all the nominated companies bring to their endeavours. This year was no different and the Awards provided a wonderful showcase for our innovators and their wide range of groundbreaking products from all over the island of Ireland. Many of these companies will no doubt go on to become industry leaders”.