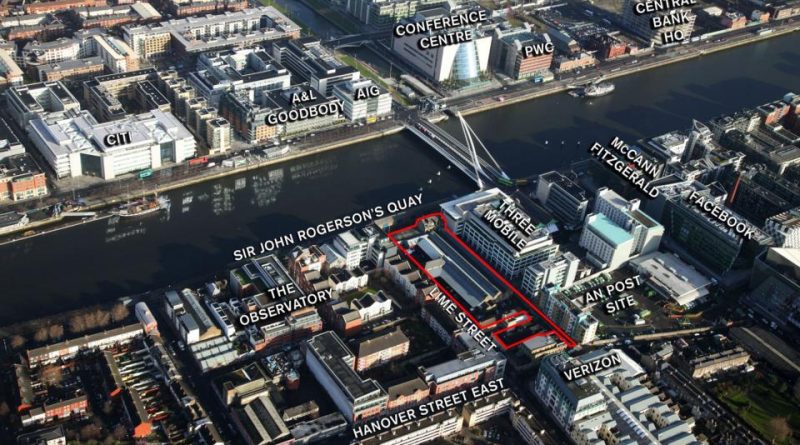 Lisney has been instructed to offer for sale a highly significant mixed-use south Docklands site on Sir John Rogerson’s Quay.

After almost 50 years of ownership by a private family, the property comes to the market at a time when the south docklands is recognised as the premier future office and mixed use residential location in the city and waterfront area of the capital.

The property has an attractive direct frontage to the River Liffey at 20-27 Sir John Rogerson’s Quay, opposite the Samuel Beckett Bridge, and also extensive frontage to Lime Street and previously had a Section 25 grant of planning permission for a development of over 13,393 sq. m of offices and 104 apartments.

Under the new guidelines the site is situated in City Block 11. There is a site ratio of 50% Residential Use: 50% Commercial Use in the Dublin City Council Strategic Development Zone Planning Scheme. The vendors own viability reports suggest that commercial development of at least 13,000 sq.m. to an overall height of 5 storeys plus residential development of 74 units are possible with the potential for further set back floors up to 8 storeys along Sir John Rogerson’s Quay itself. The agents comment that, depending on the specific design of any future scheme, there may be potential for an additional 5% of commercial, giving a 55:45 commercial: residential land mix use (subject to planning permission).

The site contains the former British and Irish Steam Packet Company Offices which were built in 1909 and which consists of two main levels with a further floor in the attractive “gambrel” roof structure. The company started out in 1836 running paddle steamers between the two islands. The building extends to approximately 600 sq. m. of gross internal area and is on the Record of Protected Structures. There are various warehouses and other buildings on the site which have been let out temporarily over the years. 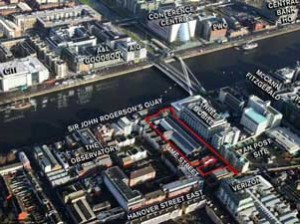 Many of the surrounding and other waterfront sites have already recently been developed which has transformed the area and nearby existing occupiers include Three Mobile, McCann Fitzgerald, Facebook and Verizon. One of the key successful ingredients of success for the area include its accessibility to public transport being within walking distance of various city DART stations, commuter rail stations and the soon to be linked LUAS Red and Green lines.

This is likely to be the most important and largest south docklands property to come to the market this year. While other sites such as the An Post site came to the market during 2014 there were conditions regarding their relocation which will not be the case with this property.

Lisney reports very strong interest in the South Docklands area with other sites of significance such as the CIE site at Tara Street being sought after and investigated by developers and funds at present.

Although not providing a specific quoting price, the agents expect at this stage that 20-27 Sir John Rogerson’s Quay will realise in excess of €30million. The property is being sold by private treaty with interested parties invited to submit their bids and other required details by 12 noon on Wednesday 2oth May. A shortlist of bidders will then be selected before a final tender is held.