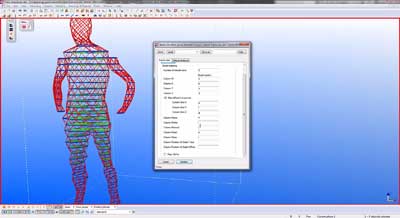 Project OVE, a virtual replication of the human anatomy, exemplifies the potential of Building Information Modelling (BIM).  What originally started as an internal project by Arup, known for its creative approach to building environments such as railway networks or gravity-defying skyscrapers, has now evolved into something far greater.

The company wanted to capture best practice examples of BIM’s benefits for construction projects and involved enthusiastic professionals from the UK’s BIM community to push the industry forward and generate an appetite for change.

As a result, OVE was born. Standing 170 meters tall on his full steel skeleton, OVE breathes, sweats, gets hungry and has a heart and brain. Its hypothetical home town is Las Vegas and the size competes with other high-rise projects such as the Gherkin, while the great pyramid of Giza barely touches its shoulder. As a structure, OVE is a mixture of a commercial and a residential building, with his legs containing apartments, torso holding offices and observation desks and head hosting the control centre and the board room. He is the embodiment of implementing BIM to construction projects with elaborate geometries, unorthodox design challenges and unique aesthetics.

The steel skeleton upholds OVE’s posture and character, which was created with two main principles in mind; first, to keep the structure as true to human anatomy as practically possible. And second to create the structure using BIM software and processes that can be reused in real life projects. OVE became more than a replication of the human body; it is actually equipped with data-rich MEP systems representing the respiratory and circulatory systems, while the architectural and accurate structural outputs give OVE his dashing looks.

To protect his major organs and hold an upright 170 meter posture, OVE was given a structural steel skeleton complete with legs, a waist and a spine.  The key challenge in creating a static building resembling a human was to establish a balance, which real humans commonly maintain through movement. OVE’s height-to-base dimension ratio is much smaller than is customary in skyscrapers. This meant mapping out how all muscles, bones and ligaments operate in unison and transforming them into building elements.

Creating OVE’s skeleton from the early conceptual model to the detailed design took two engineers and two technicians a couple of weeks while they simultaneously held day jobs. The full structural model is a product of design collaboration, interoperability of software packages and devotion to the human form and modelling.

The structural design loop consisted of four key phases. The starting point was laser scanning a human model to create a point cloud and converting it to primary parametric inputs for the diagrid scheme. This was followed by the structural analysis phase, after which the process moved into creating an accurate and deliverable Building Information Model.

According to Jonathan Lock, Associate and CAD/BIM Manager in Arup, the project team was looking for a solution that could turn the generic model into a Building Information Model fit for fabrication purposes in a cost and time efficient manner. As a result they turned to Tekla software for transforming OVE’s skeleton into building elements with fabrication-ready level of detail.  Arup saw Tekla as a perfect fit to meet their objectives. They wanted the software that was the most suitable and efficient for the structural engineering. http://www.teklabimsight.com/