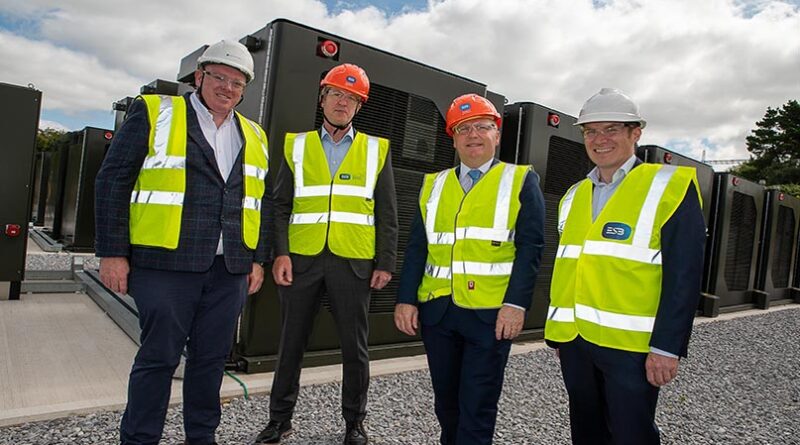 ESB is working with partners Fluence, and Irish companies Powercomm Group and Kirby Group, in the delivery of battery plant projects at Aghada, Inchicore, South Wall and Poolbeg.

The projects are ESB’s first in a pipeline to deliver grid-scale battery technology at sites in Co Cork and Dublin. Along with additional flexible technologies, these high-capacity batteries will store excess renewable energy for discharge when required, and in doing so, support Ireland in reaching its ambitious climate targets by 2030 and ESB in its Net Zero by 2040 strategy.

Minister for Public Expenditure and Reform, Michael McGrath TD, commenting on the announcement, said: “This technology will play an important role in facilitating more renewable sources of energy onto the electricity system as we continue our aim in Government to deliver the targets set out in the Climate Action Plan. I am delighted to be here today with ESB and their partner Fluence, who with the help of several Irish companies have launched the first in a series of battery storage projects. ESB has a strong history in Co Cork and with projects such as this, the region will play an important part in delivering its Net Zero strategy into the future.”

Paddy Hayes, ESB Chief Executive, outlined how the projects will support ESB’s Net Zero 2040 target: “ESB’s Aghada site has a longstanding history of innovation, and its variety of efficient gas generation technologies continue to play a crucial role for Ireland’s electricity system. Today marks another important milestone for Aghada and ESB, in commissioning this fast-acting battery unit that will support the national grid. This is ESB’s first battery project in Ireland – this and four other battery projects now in development by ESB will deliver 300MW of battery capacity within the next two years. These projects will support the delivery of a stable and cleaner electricity grid, which is set to be powered by 80 per cent renewable generation by 2030.”

ESB is working with partners Fluence, and Irish companies Powercomm Group and Kirby Group, in the delivery of these projects at Aghada, Inchicore, South Wall and Poolbeg.

For Fluence, a global market leader in energy storage, the announcement is also a significant milestone, bringing their total battery-based energy storage projects deployed or contracted globally to almost 5,000MW.

Paul McCusker, Fluence President of EMEA, said: “Today’s opening of the Aghada project is yet another step forward for Ireland and its energy transition. It demonstrates how energy storage systems can successfully displace fossil fuel plants and offer Ireland low-carbon flexible capacity to balance the electricity network. The project is built with the use of our Gridstack energy storage product that can respond within 150 milliseconds and provide up to two hours of discharge at full power. It is a part of a previously announced 300 MWh energy storage portfolio–the largest in the European Union–that Fluence is proud to be developing with ESB in Ireland.”