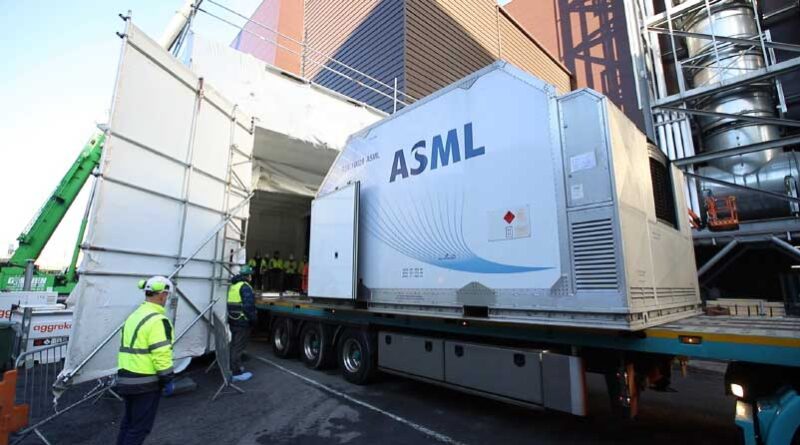 The system, made by Dutch manufacturer ASML, is arguably the most complicated piece of machinery humans have ever built and it heralds an important moment for the installation phase of the Leixlip project.

Lithography scanners are the part of the semiconductor manufacturing process where a lot of the magic happens. These scanners print the microarchitecture of each individual chip onto a silicon wafer. They do this by scanning a design template – called a reticle – and transferring this image to the silicon wafer, which is then developed.

While lithography scanners have been an integral part of making microchips for many years, the newest version of this technology, called the extreme ultraviolet (EUV) scanner, can print circuitry smaller and more precisely than anything that has come before.

It does this by generating EUV light which has 13.5nm wavelength by spraying microdroplets of tin across a vacuum chamber and striking it with a 25KW CO2 Laser beam twice. The first low energy shot evaporates the droplet to a cloud shaped like a pancake, the second high energy shot transforms the cloud into a plasma that’s focused into a beam that bounces off a series of mirrors before picking up and focusing the circuitry image into the silicon wafer to print billions of transistors and other features on the wafer.

It can print features as small as 13 nanometres in size (7500 times smaller than a human hair) with an alignment precision of just over 1nm. In context, it’s the equivalent of directing a laser pointer to your fingertip from the moon.

A machine of unique scale

The first system arrived in Ireland having journeyed across the Atlantic from our Technology Development fab in Oregon. It was first transported by 4 Boeing 747 Cargo planes with pieces weighing up to 15 tonnes each. It completed the final part of its journey via road where it was carried by 35+ trucks.

The system consists of 100,000 parts, 3,000 cables, 40,000 bolts and more than a mile of hosing. It has taken 18 months of design and construction activity to prepare the Fab 34 building to receive the machine. Some 20,000 work hours alone went into just preparing for the arrival of the scanner. Over 100 ASML staff are now supporting the build and set up of the system together with teams of trade contractors, Intel Engineers and Technicians.

The system has approximately 700 utility points of connection for its electrical, mechanical, chemical and gas supplies. It spans 4 levels of the factory, from the Basement, through to the Subfab, Fab and with an inbuilt crane that extends into the ceiling level.

Such is the scale of the scanner that the Fab 34 building had to be specifically designed around its dimensions. The standard fab ceiling height had to be increased by 10 feet to house the enormous in situ cranes, which are installed above the cleanroom so that the machine can be assembled onto its pedestal. The part of the tool that is housed in the cleanroom Fab level is the size of an American School bus!

Lithography has seen many innovations over the past decades to keep Moore’s law moving forward in the drive to cram more computing power onto our silicon chips. Breakthrough’s from 365nm light sources with mercury lamps to excimer laser bringing 248 and 193nm light were big steps at the time. Immersion lithography – where the scanner lens was immersed in a water bubble to use water’s refractive index to image more detail – double patterning and trigate transistors were all big steps forward.

This leap forward, with EUV being used in high volume, and subsequent iterations of this technology to come, marks an exciting phase of semiconductor manufacturing for Intel.

The arrival of this system to Ireland marks the first high volume EUV production in Europe, bringing with it the future of semiconductor manufacturing. Intel and ASML have a longstanding collaboration to advance the cutting edge of semiconductor lithography technology and Fab 34 will be the first fab outside of Intel’s Technology Development facility in Oregon to run the new EUV technology, an honour that the team proudly embraces.

A small group of engineers and managers have been working for years in Oregon, preparing for the proliferation of this technology across Intel’s Virtual Factory.  They are now beginning to move from Oregon to Ireland to transfer their knowledge to the local team.