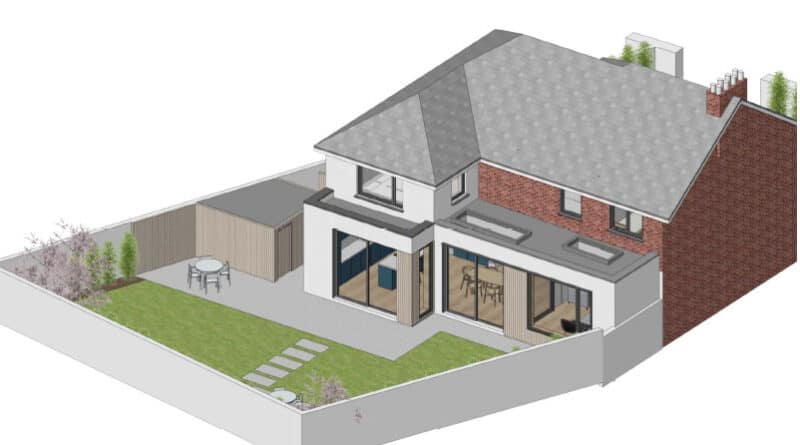 Founded in 2001, Kelliher Miller Architects (KMA) are a design-led architectural firm with a varied portfolio of projects including home renovations and new residential and commercial buildings. An important feature of the practice work is a commitment to achieving high energy efficiency in both renovation and new build projects.

Take one of the firm’s residential extensions as an example. The home is situated in a South Dublin coastal suburb; fronted with red brick, the semi-detached house was built in the ‘30s, leaving it far behind today’s energy standards.

The brief was for a large, open plan living kitchen and dining space on the ground floor, with a utility room, playroom, and storage space. On the first floor are three large bedrooms and a master suite, as well as a main bathroom and home office. According to regulations, the structure in its entirety — not just the extension — had to meet an A3 energy rating. The finished building actually achieved an impressive A2 rating. To achieve this, KMA looked to 3D modelling in Vectorworks Architect.

They built a 3D survey model in about 2 days, using placeholder geometry for the existing building. In the initial design stages, KMA concealed model details and coloured the proposed geometry to make plans simpler for the client to interpret.

“I don’t know that I could ever go back to using just 2D,” said Gillian O’Connell of KMA, who worked on the project’s survey model. “3D is just so much faster and more efficient.”

After modelling the first-floor extension and including standard details, the architects paid particular attention to the outdoor garden and nearby seating areas and the potential impact of the massing of the new structure.

They studied sunlight and shade in this area with Vectorworks’ Heliodon tool. Real-time 3D simulations showed how the sun would shine on the site throughout the day, allowing the architects to adjust and achieve the desired layout.

In addition to this real-world context, the tool is invaluable for meeting energy regulations; co-founder Tania Miller said that their decision-making is heavily influenced by its findings. For one, it helped the architects decide where to place windows to reduce the need for artificial light.

The 3D animations created by the Heliodon tool also helped with client buy-in. KMA exported movie simulations with the tool to show where shade would be throughout the day. Miller said these movies also helped get the approval of concerned neighbours who were worried about the project’s effect on their property.

KMA shared models through the Vectorworks Cloud, which saved valuable machine processing power. They also generated panoramas with a QR code so the client could visualise the project on their mobile device.

Among other sustainable elements in the modernisation project are an insulated concrete floor slab, a warm deck roof, insulation between joists at ceiling level, and new windows with triple glazing. The scheme includes a new heat pump and mechanical heat recovery system. An air tightness test verified the project was of an overall A2 rating.

All in all, the architects at KMA are grateful for Vectorworks as a design tool. “We’ve found with Vectorworks 3D that our productivity has gone up a lot,” Miller said. She went on to explain how working in 3D for an entire design process has been immensely helpful, especially when it comes to communicating with clients. For more information visit: vectorworks.net/architect