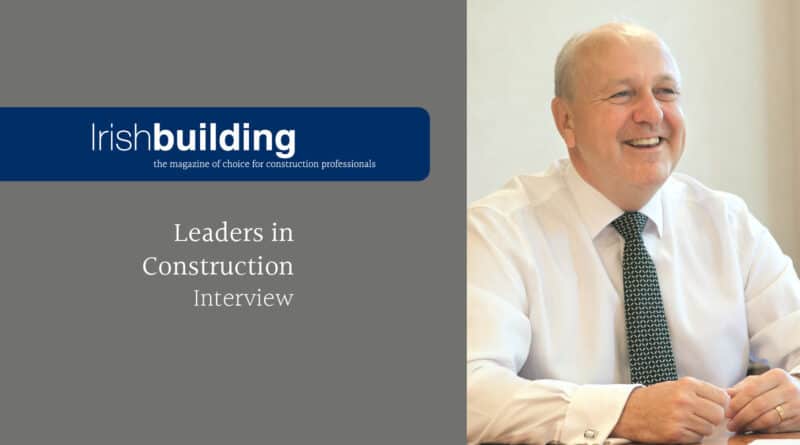 As CEO of Ireland’s largest construction company, Steve Bowcott has an eye-wateringly long to-do list. But he’s in no doubt as to what takes first place.

For The head of John Sisk & Son, there’s no question as to his top priority: the mental health of his employees. Steve Bowcott is vocal and passionate about this, and it’s clear that it won’t be sidelined or relegated on his watch.

Last year, although 26 people died on construction sites (none at Sisk), a further 250 were lost through suicide. It is further evidence, if it were needed, that anyone who thinks mental health difficulties are less of a threat than site safety issues is very much mistaken. Steve cites more stats to back this up, “In Ireland you are 9.5 times more likely to have a suicide in construction than to have someone killed on site.”

While this is lower than UK figures, where a suicide is 19 times more likely, it’s a major concern. Ultimately, Steve wants to see mental (and physical) health given the same status as safety in construction.

“In the last five years, safety on building sites has improved exponentially,” he says. “Safety is legislated for; you have to have it. I’d like to see mental and physical health legislated for also, so that there would be similar rules in place.”

Regardless of whatever steps Government may or may not take in this regard, Sisk itself is doing everything it can to help protect the health of its workers. Its pioneering mental health programme, ‘I Am Here’, has proven a hugely positive addition since it was launched in September 2019. It offers support not just to employees but also to their families. During December last, the company ran a series of wellness webinars, supported by its ‘I am Here’ ambassadors and, last year, it achieved the Ibec KeepWell Mark and won a ‘Best in Class – Mental Health’ award.

As employees began their return after the lockdowns, the company organised one-to-one conversations with all of them to find out how they were doing and if there was anything they needed help with. Opening up lines of communication like this is vital when it comes to mental health, says Steve.

“In Ireland sometimes if you ask someone ‘how’s it going?’ they’ll say ‘grand’. But you want to know what’s really behind that ‘grand’. Someone might be dealing with an illness, a stressed relationship with their partner or worry about finances; if that’s the case, they need to talk to someone.”

If these ‘one-to-ones’ uncover struggles with, say, work pressures or finances, the company can directly help with that. And for anything beyond that – anxiety or depression for example – it helps direct staff towards professional help.

All of this simultaneously helps build a stronger organisation. “If you have well-motivated, mentally and physically healthy people, you have a better business and are therefore financially stronger,” says the CEO.

Not that Sisk needs to be overly concerned about finances right now; despite Covid having had “very significant impacts” on its business last year, its figures largely withstood the onslaught. Both performance and profitability levels rebounded strongly in the second half of the year as economies reopened. Overall, in 2020, turnover increased by 6.2% to just over €1.5bn, the company recorded a before-tax profit of €23.3m, and maintained high levels of cash with zero bank borrowings.

Among numerous high-profile projects Sisk has been involved in here in recent times is 70 St Stephen’s Green, a six-storey office development with double basement. The Sisk team achieved practical completion in December 2020 – no mean feat.

“This was a fantastic achievement prior to the Christmas break on what was a very confined site in Dublin city centre with logistical, construction and public relations challenges,” says Steve.

The company also worked on BioCork 2 in Ballintaggart, Co Cork, which involved the construction of new buildings with a total floor space of almost 20,000 sq.m. It also included expansion of the existing warehouse, laboratory administration buildings, support infrastructure and utilities.

“The new facility will deliver products that will be consumed by patients, so the quality of manufacture and cleanliness of the manufacturing space are critical.”

Meanwhile, October 2020 saw the topping out of Bonham Quay in Galway. The €105m mixed use scheme was recognised as a leader in One Planet Living by international sustainability charity, Bioregional, making it the first development in Ireland to achieve such recognition.

Then there have been various projects across the UK, including for example Canada Gardens – part of the massive Eastern Lands Development at Wembley Park of which Sisk has been a part for 16 years now. Also on the agenda have been data centre and life science developments in Belgium, the Netherlands, Switzerland, Denmark, and Sweden.

The company’s reaction to the pandemic, says Steve, was all about acting quickly to deal with the unprecedented circumstances.

“As an industry we mobilised rapidly in March to create ways of working to limit the spread of Covid,” he says. “Then when we reopened in May we were successful in limiting the numbers of cases.”

This was against a backdrop of huge challenges in keeping the business running during the pandemic. These included “pivoting overnight to remote working, balancing childcare, home schooling and other demands with work, opening and closing sites in line with Government guidelines, and making all our work environments safe for our employees.”

Throughout, he adds, Sisk’s employees showed “a fantastic depth of resilience, drive, commitment and agility to respond rapidly throughout.”

“We are incredibly proud of their efforts.” Of course, Covid did mean certain actions had to be taken to maintain sustainability; these included salary reductions, furlough and redundancies. The across-the-board pay cut last year was not applied to those on less than €30,000, and the firm subsequently repaid every cent. And in the final 15 weeks of lockdown here, when construction was at a standstill, wages were not reduced.

“We didn’t want people to have financial pressure on top of any other pressures already there,” says Steve, adding that the company ensured it was in regular communication with everyone about the steps it had to take last year, “even if, often, we had little new to say.”

Covid notwithstanding, the company has been able to continue to deliver on its strategy to operate across three key regions – Ireland, the UK and Europe.

“We are growing our business in key sectors such as life sciences and data in both the UK and across Europe,” says Steve. “We have also expanded the portfolio of services we can offer from within the group with the acquisition of Vision Built, the offsite steel frame fabrication business, the ongoing growth of Sisk Living, our social housing business, our partnership with Designer Group in SensoriFM, our facilities management business, and the new fit-out offering we will bring to the market.”

Sensori has outperformed and continues to grow profitably, according to Steve, while the company’s investment in Vision Built “continues to prepare it to produce new products and represent a growing opportunity in offsite fabrication.”

Its foray into offsite fabrication, FM etc feeds into today’s reality that, as Steve puts it, “being a great builder just isn’t enough any more.”

“Clients want to know not only can you build it, but are you building the right thing, is it flexible and, from a green point of view, what’s the cost?”

In other words, they don’t just want a building, they want an end-to-end solution, which is precisely what Sisk delivers. With FM, for example, he says that “the best people to maintain a building are the people who built it in the first place.” Clients are also keen on the kinds of benefits that come with ‘cognitive design’.

“For example, we can put sensors in a building so that as soon as a door shuts, the lights go on standby, we can monitor every office to see what’s being used, who is parking where etc,” says Steve.

“The stringent application of the valuation policy, reduction of loss-making contracts, maintaining of strong cash balances and upgraded Key Account activity should protect us, whatever the market conditions,” says Steve.

Alongside all this, Sisk continues to put substantial investment into boosting performance in all areas of its business. That includes everything from technology (particularly analytics and automation) to pre-construction project selection.

This structure, says Steve, positions the company optimally “not only to deal with the geographical variances caused by the pandemic, but also to address the very different market conditions going forward.”

It is Sisk’s firm aim to be carbon neutral by 2030, and it is on track to get there. In 2019/20, 44% of its diesel came from hydrotreated vegetable oils, which has 90% less carbon output – a “massive step forward,” says Steve. And while carbon output measurements for the past year would be meaningless given the circumstances, the firm had already dropped its output by 15% in 2019 and is now measuring again.

It will plant 170,000 trees this year and aims to have planted no fewer than 1.7m by 2029. When it comes to carbon disclosure it has a B-minus rating, as opposed to the C or D that is more common among contractors.

“We want to be carbon neutral by 2030. That is a big challenge for us but we know we can do it with the support of our supply chain partners and our clients and the industry at large,” says Steve. “Despite the challenges presented by the pandemic we continued to make good progress advancing our sustainability strategy and making a difference in the communities in which we work.”

The company has continued to improve its operational carbon performance, reduce its energy consumption, and lead the way with its pioneering approach to the electrification of its fleet and the adoption of alternative fuels.

“We will soon be announcing that we have reached our carbon neutrality target through the use of offset, but that is only the beginning and we want to do much more,” adds Steve.

Boosting equality, diversity and inclusion (EDI) has strong support at board level in Sisk. The company has partnered with the Irish Centre for Diversity, from which it achieved ‘Investors in Diversity’ silver status. It now has its sights set on securing itself the Investors in Diversity Gold Standard by 2023.

In practical terms, it runs a mentoring programme which provides all its employees with access to role models, as well as an Inclusive Behaviour and Language training programme. The latter, says Steve, aims “to drive leadership accountability and reduce bias in how we deal with each other.”

When it comes to policies on disability, Sisk is one of ‘The Valuable 500’ – 500 business leaders from around the world that put disability at the heart of their inclusion policies.

Although in 2020 the UK government temporarily removed the obligation for businesses to publish gender pay gap data, Sisk opted to publish its data for the UK, Ireland and the combined Group position regardless.

Men and women doing the same jobs at Sisk get paid precisely the same, although many of its female employees tend to be in more junior roles. This is something Steve wants to work on, and see evolve, but it’s not a case of ‘one-size-fits-all’. For example, he says, men and women tend to take a slightly different approach to promotion.

“If you offer a man a promotion he’ll tend to come straight back and accept it; women will be a lot more sensible about it, asking questions about their prospects etc. We have to make sure that we mentor women through that process.”

And while, says the CEO, the company has “a way to go” in creating real balance between the genders and greater female representation, it is clear that it is in this for the long haul.