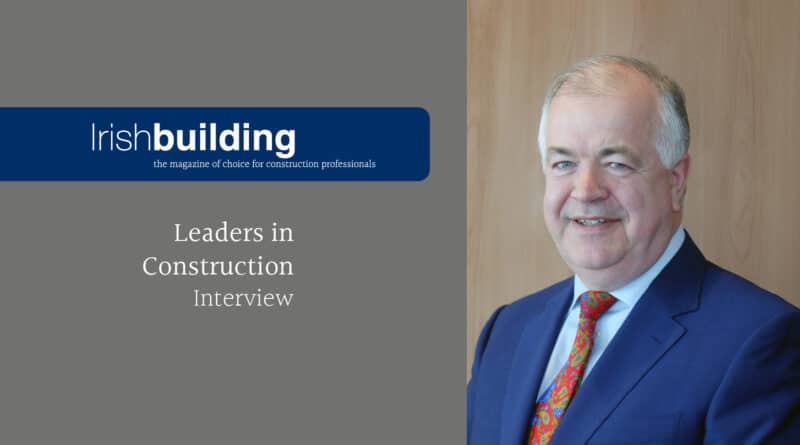 Whilst he may be marking 40 years at the helm of one of Ireland’s leading construction companies, Padraic Rhatigan remains characteristically low-key about the whole thing. His focus remains firmly on getting everything back up and running again as his company, JJ Rhatigan – and the sector as a whole – emerges from the pandemic.

It has, needless to say, been a year like no other. Padraic thought he had seen it all over many years since taking over from his late father, John J Rhatigan, in 1981, but Covid had other ideas.

Now though, it’s very much back to business for JJ Rhatigan and its 455-strong workforce. The group recorded a turnover of €288m last year, and is projecting in excess of €335m this year. Although the majority of its business is in Ireland, it also has a strong presence in the UK.

Most of JJ Rhatigan’s UK business involves Hotel and Residential projects for third-party developers, typically in the private rented sector (PRS). In Ireland Residential accounts for about 40% of its work, with the rest spread across Education, Healthcare, Hospitality and Commercial. It has repeatedly been recognised for excellence, having won numerous awards for the Company; it also features on the recently published Sunday Independent/Statista list of the 150 best employers in the country.

Pandemic or no pandemic, JJ Rhatigan has a range of anchor projects either under way or freshly completed. In North County Dublin, for example, it has just handed over the new National Forensic Mental Health Service facility at Portrane. Three years in the making, the €148m development will facilitate the re-location of the Central Mental Hospital in Dundrum.

Meanwhile, the company is at an advanced stage with McGarrell Reilly’s ambitious Charlemont Square development, also in the capital. Consisting of approximately 500,000 sq.ft. of office accommodation – almost half of which will soon be occupied by anchor tenant Amazon – it also includes  over 260 residential units.

Of course, it’s not all about Dublin. The firm is most of the way through a Public-Private Partnership (PPP) project as part of the Torc Housing Partnership consortium, which will deliver a total of 465 social housing units. Work also continues apace on a large mixed-use development at Crown Square in Galway – the first of this scale in the city. It entails some 400,000 sq.ft. of office space, a 180-bed hotel, over 300 PRS units and ancillary retail, medical and other uses.

According to Padraic, the most pressing challenge for the construction sector right now is simply “getting the lights turned back on,” which is something he relishes.

It is no small ask, but he is confident that the industry – and indeed the country – will work its way through it.

“I think the country is in a better place than we would have expected it to be, considering what we all have gone through over the past 15 months. Now it’s time for the industry as a whole – Clients, Design Teams, Contractors, Subcontractors, Employees – to collectively put their shoulder to the wheel.”

Throughout all this, he is confident that Ireland will continue to appeal to Investors and Employers in the FDI sector. He says it is still seen as an attractive country in which potential employers can invest, and it is imperative that we encourage that.

“Traditionally, Ireland has been regarded as politically stable and sensible, and it’s important that we maintain that reputation. We need to make sure that investment funds are welcome; people compare them to vulture funds but they’re not the same thing.”

Padraic acknowledges the fact that there is “real inflation” in terms of construction costs at the moment, but sounds a note of optimism that at least some of the factors behind this may well find their own level again. One example of this is the supply of timber.

“Timber prices increased due to lack of supply, but that’s largely down to very little harvesting of timber taking place last year due to the pandemic.”

He adds that steel prices also tend to fluctuate; however, as manufacturing begins to open up again, he is hopeful that any inflation can be reined in.

On the subject of below-cost tendering for projects, which seems to have become a feature of the construction landscape in recent years, Rhatigan says we need to take a “mature approach.”

“Below-cost tendering is unsustainable and dangerous, particularly given that we have just emerged from a pandemic. Having said that, we need to ensure that we stay competitive, because ultimately the projects we’re trying to build here need to be able to compete on international markets, whether it’s to do with office rent levels, manufacturing levels, Residential accommodation or whatever.”

The much-vaunted skills shortage in construction is of course another challenge. However, Padraic welcomes and is encouraged by the fact that there are many initiatives now being taken to entice more people to take up apprenticeships.

“It’s something we need to be mindful of,” he says. “We need to encourage our own people into the sector but also welcome people from other EU countries and elsewhere with specific skills in the various trades.”

He says that this combination is important if the sector is to be able to tap into the best skills across the board.

In many ways, the sector has more to offer new recruits than perhaps it had in the past; for example, developments in construction technology may entice a whole new cohort keen to hone their tech knowhow alongside their trades.

“There are lots of different types of opportunities in construction now, and when people go into trades they are also trained on the technology, which they are using more and more, as well as using their hands,” notes Padraic.

Despite the fact that it was by any measure a bruising year for most sectors, Padraic says there may be some positives to take away from 2020. Chief among these is the fact that everyone learned to plan better, the construction sector being no exception.

“Efficiency and coordination became very important so, in a roundabout way, maybe we have learned some valuable lessons during this time,” he notes.

In a more general sense, he says, other lessons from the past year include the fact that we are all so interdependent and, ultimately, resilient. “The pandemic showed how dependent we are on each other, both in business and in life, and also I think it’s amazing how resilient people are.”

JJ Rhatigan has never been slow to adopt new practices across its business, be they in technology, sustainability or elsewhere. In construction – as in practically every other sector – tech has evolved at lightning speed in recent years. As Padraic puts it, it’s just a “way of life” now.

“We always aspire to be at the cutting edge in the use of all the best technology available to facilitate the safe and efficient delivery of projects.”

This also applies to sustainable practices and the pursuit of the ultimate goal of a circular economy. Padraic fully subscribes to the principle of sustainability in construction; his company actively pursues this by, for example, ensuring that the segregation and disposal of waste from sites is monitored with a keen eye. The upshot of this is a far higher rate of recycling than would have existed in the past.

Anticipating a busy year to come, the company has high hopes for several fresh projects it has in the pipeline. Just some of those it will be working on over the next 12 months include the completion of Student Residences Masterplan Phase 1 in UCD and a University Academic building in NUI Maynooth. It will also shortly commence work on an €18m community nursing unit for the HSE in Tuam and the construction of a new Post Primary School in Castleknock. While for now, his focus is very much on stabilising and restarting work in existing markets, Padraic is not ruling out looking further afield in a year’s time – it’s precisely the kind of ‘can-do’ attitude that has seen him through the past four decades.