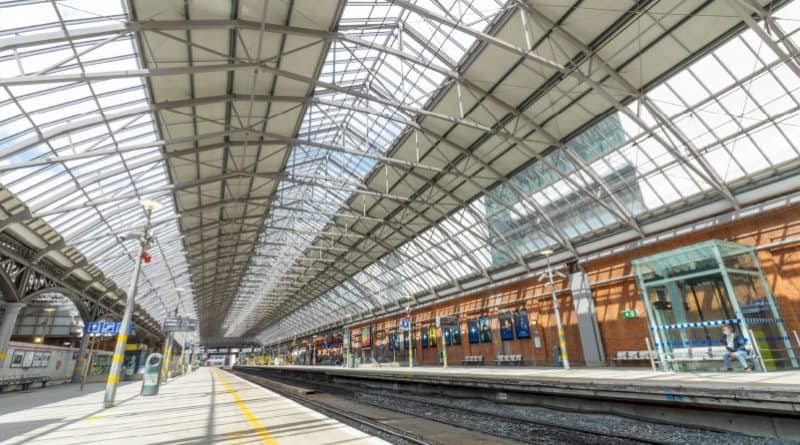 Replacing the roof over Ireland’s busiest commuter train station, Pearse Station, with minimum disruption to train services, or to its close city centre neighbours, was the task taken on by Iarnród Éireann and contractors John Sisk & Son, and completed in September 2020.

Pearse Station was built in the 1830s and the original roof dated back to the 1880s. The Pearse Roof project was funded by the National Transport Authority. The main civils contract undertaken by Sisk had a gross cost of €12.5m and included the design and construction of two new roofs at the 157m long main train hall and 80m long adjacent carpark. There are approximately 4,500 steel components in the new roof. This includes 2,300 individual panes of glass, 1,100 cladding panels, 5.6km of purlins and 60 new trusses. Works also included drainage, office, roof, remedial works, demolition and disposal, site services, brickwork repairs, painting and other associated works within the station.

Iarnród Éireann had begun the process of surveying the existing roof in 2013, to ascertain whether it needed remedial works or replacement. While the facade on Westland Row is a protected structure, the roof itself was not. Iarnród Éireann carried out the renovation works under a Class 23 planning exemption Dublin City Council allowed the work to proceed within the limits of the exemption with the stipulation that the new roof matched the profile of the previous structure, matching the balance of materials and general colour scheme.

“As we thought more about the complexities of the job, we decided the best way forward would be the Design and Build form of contract,” recalls Colin Grimes, Senior Project Manager, Iarnród Éireann. “We realised we could benefit from the vast knowledge of the consultants and contractors who brought a lot of their own strategies to bear in how they carried out the works.”

O’Connor Sutton Cronin were procured to prepare the Design and Build contract documents and subsequently to act as ER and RE for the main contract works on behalf of Iarnród Éireann. After a robust procurement process, John Sisk & Son were awarded the contract for the main roof replacement works.

Will Merriman, General Manager, Civils Ireland at John Sisk & Son, calls it a “career-defining job,” saying, “Everybody would relish working on a job like this, because of the engineering and the technical challenge.”

The city centre station is on a tightly bound site, with local residents, Saint Andrew’s Church and the Trinity Biomedical Sciences Institute building all surrounding it, and minimal access points. On top of this, the works needed to be completed with over 30,000 passengers per day passing through the busy station. “With residential areas so close by, and the Trinity College student accommodation, night time working was always going to prove difficult, So installing a robust temporary works protective structure above the live railway was essential to success as it allowed us to work predominantly throughout daytime hours outside of the weekend shutdowns,” notes Grimes. Extensive communication with internal and external stakeholders was an integral part of the process.. “Early engagement and continued engagement with stakeholders was a critical task for us – ensuring you’re talking to the right people and you’re at a high level of engagement early on.

“The other aspect, which was really important, was that we had our own community liaison consultant on board early on, as did the main contractor. We agreed between us to set up a forum to address issues with our external stakeholders. We set up an official engagement, met with them every month, and took their concerns on board. We also had information evenings with them, where local representatives, residents or people from our external stakeholder groups could come in and see what we were doing and ask questions.”

The challenging live rail environment, and the fact that the station is built on two curves, added to the complexity of the project. Merriman also notes that as the building had settled over the years, the existing roof was tying the structure together. “One of the risks was if we remove too much at a time, or if we didn’t control the existing walls, that they would spread or move as soon as we took the existing weight off the structure.”

The temporary works steel structure was a major feature of this project. The Sisk Engineering Services in-house team modelled the pad foundations alongside the point cloud survey supplied by the client. The use of point cloud surveys significantly reduced the requirement of further time-consuming surveys. Through the use of BIM in Navisworks the exact clearance to each existing truss on the platform level could be easily identified.

Each bay at Pearse Station is unique and this led to quicker and easier clash detection features utilised to relocate columns and foundations. Navisworks was used in review meetings to discuss and resolve issues arising from column positioning. Pad foundations and column setting out information can be taken directly from the BIM models, reducing the amount of drawings to be produced. The steel model was issued directly to the steel fabricator for detailing, as opposed to the traditional method of producing multiple 2D drawings.

A secure crash deck platform over the station was put in place to allow work to safely continue overhead while the public continued to use the rail platforms below, and a number of predefined 52-hour shutdowns of the station took place at weekends, spaced out throughout the life of the project.

“Those windows of planned possession were four to six weeks apart. There’s a lot of pre-planning as to what we do in each of those access windows…if you didn’t get the platform installed, or the overhead electrics moved, or whatever had to be done in that particular window, you didn’t just lose a day, you potentially lost six weeks until you have the next available window,” notes Merriman.

Pearse Station is elevated with Cumberland Street South running underneath. With restricted access to the site a logistics and site set-up plan was developed by the Sisk team prior to works commencing. These plans were agreed with key stakeholders and set out the site constraints and safe execution of the works. The logistical planning of storage space, transportation and delivery of materials and temporary works were successfully managed throughout the works with minimal disruption to local residents.

Site access proved to be very challenging due to the constraints of the area. In order to alleviate this a one-way delivery route was implemented with all deliveries coordinated allowing the drivers to drop and go. Due to the limited storage area on site, Just-in-Time delivery was implemented for large material deliveries. The site had the option of two delivery routes either Sandwith St. or Erne St. Upper entrance for deliveries depending on the size of the load.

The melding of technology and communication, with top-class engineering, was crucial to the smooth running of the whole project. Merriman notes, “Particularly during the 52-hour possessions where we were working 24 hours around the clock and doing shift work. The continuity of information and data was absolutely essential at the transfer between shifts.”

“It was very enjoyable to work on lots of challenges, but very rewarding,” reflects Grimes. “We got a lot of very positive feedback from the public, over the last seven or eight months of the job as the temporary crash deck was being removed and the roof was revealed.”

Commenting on the project, Paul Brown, COO, Construction and Civil Engineering, UK, John Sisk & Son says: “The Pearse Station roof project epitomises engineering excellence in a very restricted city centre location. I would like to commend our customer, the whole project team, the Sisk in-house Engineering Services team and our supply chain partners who demonstrated great flexibility to deliver this project on time and on budget. Sisk has a proven capability in the rail sector across Ireland and the UK. We have excellent client relationships in Ireland with Iarnród Éireann and in the UK with Network Rail. Our longstanding relationship with Iarnród Éireann goes back many years having completed a number of significant projects including, Osberstown Rail Underpass in Co. Kildare.”