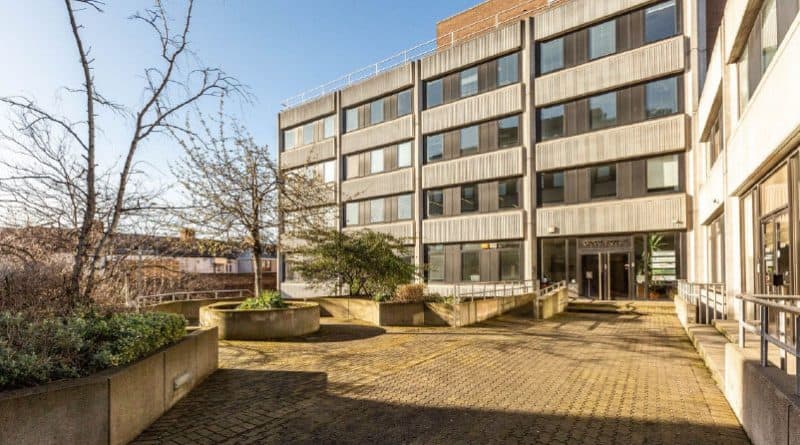 International property developer Osborne + Co has acquired the site by the Grand Canal that houses the headquarters of the Construction Industry Federation (CIF). The site, known as ‘Canalside’ is jointly owned by the CIF and the Construction Workers Pension Scheme (CWPS).

Osborne + Co plan to demolish the existing 1980s office building on the site and build 147,000 sq ft of new Grade A office space. The redevelopment will replace the existing CIF offices with a new 17,000 sq ft building which will be retained by the CIF under the terms of the deal. In addition, the scheme will include a second 130,000 sq ft Grade A office building to come to market in early 2024.  A planning application is due to be submitted by November 2021.

Canalside is located 200m away from Charlemont Luas stop, which is also to be the location for the final stop on the Metro line planned from Dublin Airport. High profile technology companies including Amazon, LinkedIn, Zendesk, and TikTok have been attracted to the area following its extensive redevelopment in recent years which has transformed the area into a new quarter with a thriving exciting tech cluster at its heart.

Osborne + Co has a track record of successful large-scale office and mixed-use projects including the Santander Bank’s New UK HQ (Milton Keynes), Belfast Waterside (Belfast), and the HSBC Middle East HQ building (Dubai). The deal marks Osborne + Co’s second acquisition in Ireland having bought 6.5 acres of land in Sandyford for an office led redevelopment in early 2020 that is adjacent to the Central Park office campus.

Osborne + Co differentiates itself through being a significant equity co-investor in all its projects, and through its strong sustainability and community engagement credentials. It has an existing Irish connection through its co-founders Jim and Conor Osborne and has an ambitious expansion strategy in Ireland with an aim to build on its existing acquisitions to create a€500m portfolio over the next 3 years.

Commenting on the acquisition Tom Hamilton, Managing Director of Osborne + Co Ireland said: “We have ambitious plans for a redevelopment to provide both a new home for the CIF and a new office building in an excellent location adjacent to public transport and the city centre, for which we believe there is a highly compelling demand and supply dynamic. We are confident that despite the recent challenges of the pandemic there remains a positive outlook for inward investment and demand, particularly from international technology companies for whom the fundamentals in Ireland remain highly attractive. We believe this will continue to sustain demand for high quality, well located and sustainable workplaces such as our development at Canalside.

“We will be designing this building with the aim of creating and curating the kind of collaborative space for innovation and engagement that modern occupiers and the digital economy demand.

“Osborne + Co has a strong pedigree of executing on ambitious redevelopment schemes internationally, and we are excited about our continued investment into the Irish market. We expect to make further investments this year and look forward in the near term to progressing our planning application to redevelop this site.”

Frank Kelly, President of the Construction Industry Federation said: “This is an exciting step forward for the Construction Industry Federation.  Our new headquarters will reflect the exceptional quality, sustainability and dynamism of the industry the Federation represents. Osborne + Co’s track record internationally is exceptional.  As our trusted development partner, they will deliver an office development to meet the evolving needs of our members and industry.”

Andy O’ Gorman, Chairman of Construction Workers’ Pension Scheme said: “The CWPS Trustee Board are pleased on behalf of all the scheme members that agreement on a joint sale of the site brings a significant enhancement to the value of the Canal Road property, which forms part of the Scheme’s substantial Investment Portfolio currently valued in excess of €1.8 billion.”

The masterplan architects on the project are Reddy Architecture and Urbanism. The selling agents were Des Lennon at JLL and Suzy Quirke at FQP, and Osborne + Co has appointed Cushman and CBRE as letting agents for the offices, which are targeted for competition in early 2024.