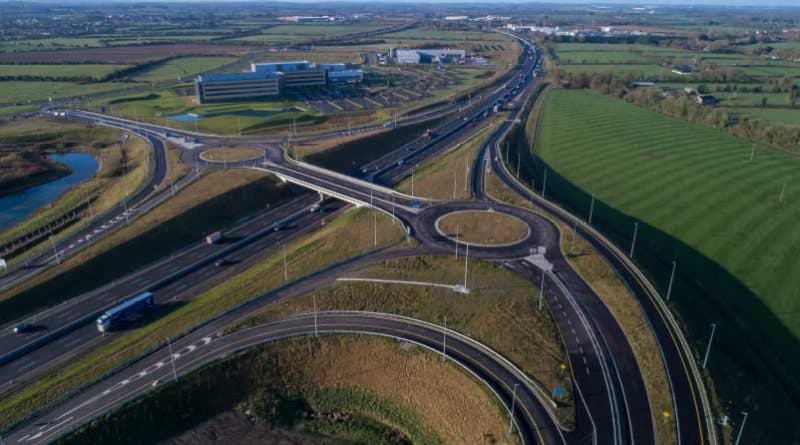 The new Sallins Bypass in County Kildare, including the new Junction 9a Osberstown Interchange, is now open to traffic, providing greater accessibility to and from the M7 to Naas, Sallins and environs.

This is the last major milestone in the project, which included the associated widening of the M7 motorway between junctions 8 and 11, which has provided major benefits for users of the motorway since completion in November 2019.

Atkins – a member of the SNC-Lavalin Group – supported Kildare County Council, the Department of Transport and Transport Infrastructure Ireland (TII) in delivering this €110m regional transport project, having been appointed in 2016 to assist with the tender process, the appointment of a contractor and supervision of the works undertaken by the SIAC / Colas joint venture during the design and build phase.

The new bypass comprises of approximately 1.7km of dual carriageway and 1.85km of single carriageway and includes a structure under the Dublin Cork Railway Line and bridges over the M7 at Osberstown, the Grand Canal and the River Liffey. The project also saw the construction of Active Travel infrastructure including 2.5km of shared cycle and pedestrian pathways and 2.3km of segregated cycleway and pedestrian footpaths.

The opening of the bypass is expected to take significant traffic out of the village of Sallins, creating a safer travel environment while also improving public transport accessibility and access to and from Sallins train station.

Richard Neuling, Technical Director at Atkins, said: “Atkins is delighted to have worked closely with Kildare County Council, the Department of Transport and TII to deliver this critical and long-awaited project, which is of great importance for Kildare and the Leinster region.

“In addition to providing immediate benefits and an improved environment for Sallins, it will also improve motorway access and traffic flows for the surrounding area. It will have a very positive impact on the local community and ensure that users experience a safer and more reliable journey.”

Commenting on the opening of the new Sallins Bypass, Minister for Transport, Eamon Ryan, said: “The Sallins Bypass will provide much relief to congestion in Sallins Village and the surrounding area and will improve people’s daily life in the village of Sallins, Naas and beyond. The scheme includes measures to enhance cycling and walking with the provision of segregated cycle tracks and footpaths and connectivity to existing active travel routes.  In addition, the project will improve public transport routes particularly access to Sallins train station.”

Celina Barrett, Director of Services, Roads, Transportation and Public Safety, Kildare County Council, said: “Kildare County Council is delighted to officially open the new Sallins Bypass. I would like to congratulate all involved in the successful collaboration between the Kildare National Roads Office, Kildare County Council, the Department of Transport, Atkins and the contractor SIAC/Colas JV. This is a significant infrastructure project and one that we believe will benefit the people of Kildare hugely through lower traffic volumes, improved access and a safer travel environment. We are committed to delivering and enabling infrastructure for a connected county and this project is an important part of delivering on that commitment.”

Peter Walsh CEO TII said: “On behalf of TII, I would like to congratulate Atkins Consulting Engineers, working on behalf of Kildare County Council, in collaboration with TII and the Department of Transport for helping deliver a successful opening of the Sallins Bypass, along with a new Junction 9a on the M7 motorway.”