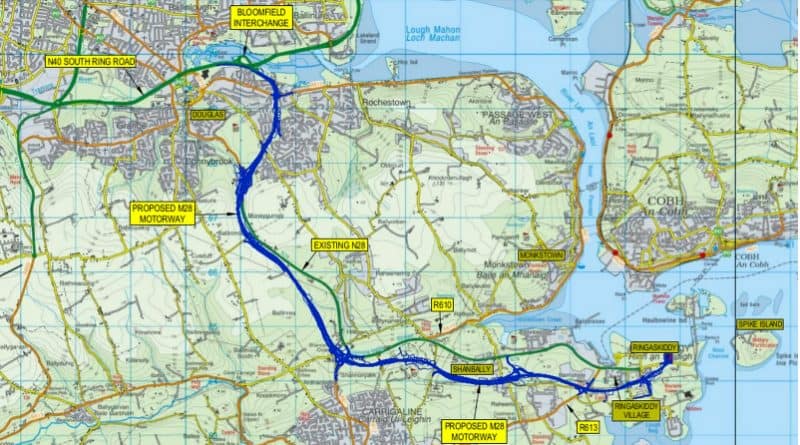 The challenge halting the development of the M28 to Ringaskiddy has been refused leave to appeal to the Supreme Court. In effect, this clears the way for the €250m project to move forward.

The legal challenge brought by residents last November to An Bord Pleanála’s planning approval for the motorway refused the M28 Steering Group leave to bring the case to the Court of Appeal. In dismissing the action Justice Michael MacGrath said at the time that the EIS was conducted in accordance with all the requirements of the relevant EU directive and that the board was not been in breach of any of its obligations under the directive. The only available course of action open to the Group was to petition the Supreme Court but it is now reported that the court has declined that option.

The proposed project will be carried out by Cork County Council on behalf of the National Roads Authority and comprises of 14km of standard dual divided motorway approx., 1.6km of single carriageway, and a service area 1.8 hectares in size.

Responding to the development, Cork Chamber CEO Conor Healy stated: “This decision is highly significant in that it now paves the way for the M28 Ringaskiddy upgrade to move ahead without further delay. This essential piece of infrastructure, which is of national and regional importance, has been long delayed generating huge frustration.

“The residents and daily commuters along this corridor can now look forward to infrastructure that is fit for purpose in terms of capacity and safety. It is very positive news that the highly valued industry base, IDA land bank and the Port of Cork can now be facilitated in delivering on development and expansion plans, which are of heightened importance as the region responds to existing and potential demands post-Brexit. The project will also be an integral step for the long awaited regeneration and creation of vibrant communities in Cork’s Docklands.”

“It is now essential that the National Development Plan, currently under review, fully endorses the significance of this project and the need for it to move forward without any further delay with early government funding and construction timeline commitments,” Healy added.