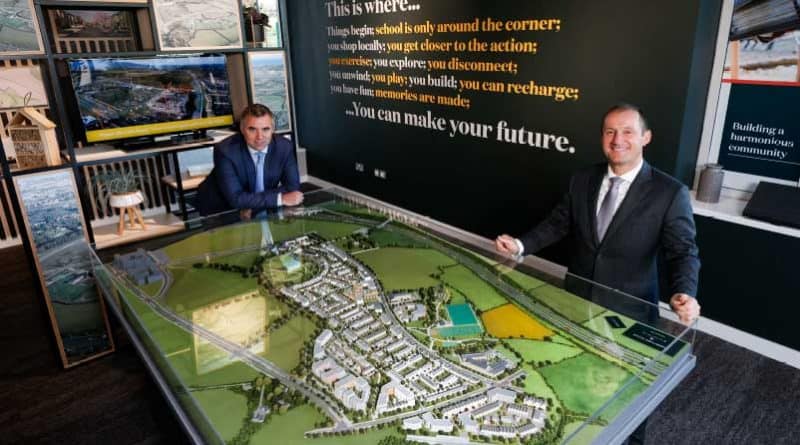 Quintain, one of the largest residential developers in Ireland, has launched its Masterplan for Cherrywood Village, which will deliver 1,300 new homes in Dún Laoghaire–Rathdown, Co Dublin by 2025.

Cherrywood Village is located on a 65-acre site within the Cherrywood Strategic Development Zone (SDZ) and will comprise a mix of new houses, duplexes and apartments with two public parks, 27 acres of green space, and over 4,300m² of retail and civic amenities in the village centre.

The plans for what will be the most connected village in Ireland have been made available today at www.cherrywoodvillage.ie, where prospective homeowners can register for a tour of the site.

The project has been designed to create a diverse new community that will be easily accessible by public transport, with a strong emphasis on sustainable development that protects existing heritage sites.

The Laughanstown Luas Station is located at the heart of the project, and there will also be extensive cycle paths and walking routes, including The Cherrywood Way, which will connect the village to Loughlinstown to the south, and Foxrock to the north through a network of greenways.

Quintain plans to start construction before the end of the year, with the first homes completed by mid-2021. There is an ambitious timeline for the project that will see all 1,300 homes built and the Village fully occupied by 2025.

Cherrywood Village is situated close to major employers like Vodafone and Microsoft in Sandyford, and Dell and Elavon in Cherrywood Science and Technology Park. Quintain is also factoring the increase in working from home into its plans and looking at innovative options to incorporate office space into its new houses, and to build more shared workspace in its apartment developments.

The Masterplan will build on a large network of infrastructure that is already in place, including a road network, the Green Luas line, and public parks. The fully completed Beckett Park has an abundance of amenities include all weather sports pitches, tennis courts, jogging tracks, a boules court, an outdoor gym, playground, and a sport pavilion with changing facilities and café.  Tully Park has been completed on the western side of the site and is built around early Christian monuments and Tully Church dating from the ninth century.

Cherrywood Educate Together National School, adjacent to Tully Park, opened in September, and a secondary school is expected to open in September 2021.

Eddie Byrne Joint Managing Director of Quintain Ireland said: “We are excited to be launching this Masterplan for what will be the most connected village in Ireland, putting community, accessibility and sustainability at the centre of its plans. Cherrywood Village will deliver much needed new housing supply to an area that is well-connected to existing infrastructure and amenities. The 1,300 homes we are planning will cater to a range of different housing needs with a particular focus on young families and first-time buyers.”

Michael Hynes, Joint Managing Partner of Quintain said: “Cherrywood Village is in a stunning location with views of both the Irish Sea and the Dublin Mountains. Cycleways and pedestrian routes will link to the LUAS and Dublin Bus stops, and a vibrant village centre will provide shops, restaurants and cafés, and crèche facilities. Our design approach will incorporate features to facilitate working from home, and deliver a high standard of energy efficiency.”

Cherrywood Village represents around half of Quintain’s 118-acre land holding in the area that was acquired last year from Hines and King Street Capital. When fully developed, Quintain will deliver over 3,000 new homes in an area with extensive transport links and high-quality local amenities.

In addition to its land holdings at Cherrywood, Quintain will be responsible for the residential development of a further 340 acres of prime assets in Ireland at Adamstown, Clonburris, and Portmarnock. Overall Quintain plans to develop 600,000 sq. ft. of commercial space and more than 9,000 new homes making it one of the largest residential developers in the country.

Pictured: Joint Managing Directors of Quintain Ireland – Michael Hynes and Eddie Byrne with a model of the Masterplan for Cherrywood Village that will deliver 1,300 new homes in Dún Laoghaire–Rathdown by 2025.