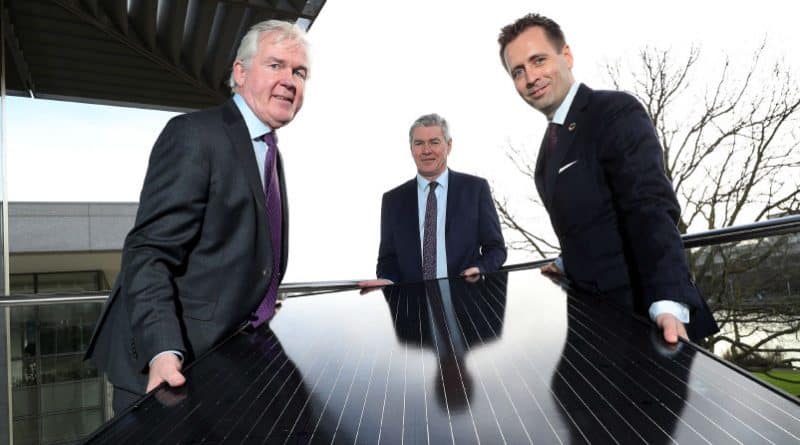 Obton has just announced details of its €300m investment in the Irish solar energy sector. Obton, a Danish solar photovoltaic (PV) business, and its Irish partner Shannon Energy, will develop up to 500 MW of solar PV projects in Ireland over the next five years.

The investment will see over €300m being spent in the Irish economy at today’s energy prices and will create over 1,000 jobs particularly during its construction phase.

Obton’s significant investment in the Irish solar energy sector was launched today by Anders Marcus, Obton CEO, Mark Foley, Eirgrid CEO, and H.E. Uffe Balslev, Ambassador of Denmark, at an event in University College Dublin. This investment will see around 2,000 acres of farmland converted to the production of renewable energy, helping to deliver the Government’s strategic goal of zero carbon emissions by 2050.

In 2018, Obton formed a joint venture with Dublin-based Shannon Energy. Together they are building an impressive pipeline of solar power investment projects in Ireland and are committed to playing a key role in the transition towards renewable energy.

In conjunction with the investment announcement, Obton and Shannon Energy have also announced details of their first three strategic project acquisitions: the Grian portfolio of solar projects in Westmeath, Longford and Tipperary; the IGP portfolio of projects in Tipperary and Cork; and the Wind Energy Direct solar project in Galway. These three projects will deliver approximately 150 MW of solar power, which would be enough energy to cover the yearly energy consumption of 25,000 homes.

Speaking at the launch event, Anders Marcus, Obton CEO, commented, “Obton’s vision to create a sustainable future for the coming generations is of highest priority. Through Shannon Energy and our business partners, we are in a great position to do just that in Ireland.”

Commenting on the investment announcement, Noel Shannon, Shannon Energy CEO, said, “Shannon Energy are delighted to have secured the financial strength for constructing Utility Scale solar projects in Ireland, through our partnership with Obton, and we look forward to securing the licences for our planned implementation in the upcoming Renewable Electricity Support Scheme (RESS) auctions over the next five years.”

Welcoming the announcement Mark Foley, Eirgrid CEO, commented, “As the operator of the national electricity grid in Ireland, EirGrid is committed to achieving 70% renewable energy on the power system by 2030. Investments in renewable energy projects, such as the one announced by Obton and Shannon Energy today, are critical to achieving that goal.”

H.E. Uffe Balslev, Ambassador of Denmark commented, “Obton is an ambitious Danish company with long experience within solar power investment in many countries. I am proud to support their entry into the Irish market and excited about their expected substantial contribution to making Ireland meet the 2030 renewable energy targets of the Government’s Climate Action Plan.”