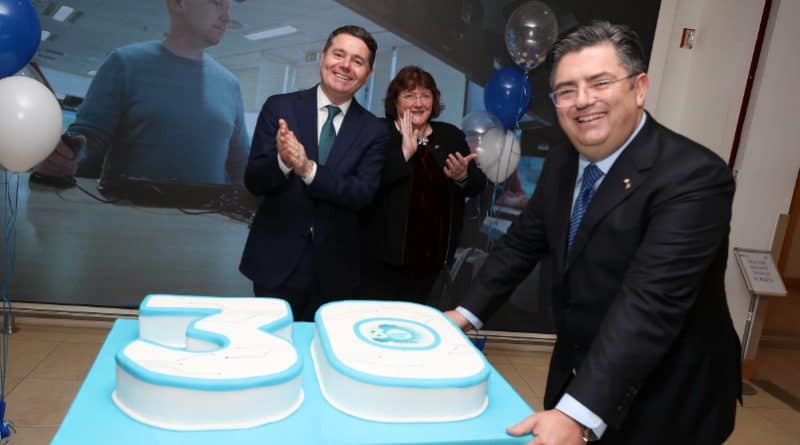 This week marks the 30 year Anniversary of Intel operations in Ireland. Intel first decided to locate its technology campus in Ireland in 1989 and since then, over $15b has been invested in the 360-acre former stud farm, creating one of the world’s most technologically advanced manufacturing facilities that produces some of the most advanced products on the planet.

Over the past 30 years Intel in Ireland has come to represent a diversity of activities across the spectrum of Intel business from advanced manufacturing to cutting edge research and design.

Intel’s operations in Ireland, which today has almost 5,000 people, began initially with the establishment of the European Site for Systems Manufacturing (ESSM) where desktop PC systems and motherboards were produced.

The first wafer fabrication plant – known as Fab 10 – would soon follow and with its opening Ireland became the only location in Europe to manufacture Intel microprocessors. Over the following decades Fab 14 and Fab 24 were added to the Intel campus and in recent years, all the manufacturing space at the Leixlip site underwent an upgrade project that enabled Ireland to be a key location for production of Intel’s 14nm process technology.

Development of the Leixlip site continues today and in December 2018, Ann Kelleher, Senior Vice President and General Manager of Manufacturing Operations at Intel, provided an update on plans to invest in the expansion of Intel’s global manufacturing network, including Ireland.

To mark the occasion of 30 years of Intel in Ireland, a number of external guests joined with Intel Ireland employees today at the Leixlip campus to commemorate this significant day, to reflect upon the milestones and memories of the past 30 years, and to look to the next chapter.

The anniversary comes in the same week as a decision to grant planning permission for a proposed new €3.6b manufacturing fabrication facility at its plant in Leixlip.

Intel released a statement saying the company was moving forward with the early phases of a multi-year construction programme on site.

The celebratory event was attended by a number of special guests including the Mayor of Kildare, Suzanne Doyle, Minister for Finance and Public Expenditure and Reform, Paschal Donohoe, Senior Vice President and General Manager of Manufacturing and Operations at Intel, Ann Kelleher and Intel Ireland General Manager Eamonn Sinnott.

Opening the event Eamonn Sinnott shared how proud he was of the successes of the past 30 years and to remark on how Ireland has been a welcoming home which has cradled Intel as it progressed to become one of the only facilities of its kind in Europe and indeed the world – “The extraordinary story of Intel in Ireland would simply not have happened without the contribution of numerous key stakeholders. I would like to acknowledge and thank each and every one, for their integral role in creating an environment in which innovation and creativity could prosper. I would like to congratulate and thank the people here at Intel Ireland who have continually demonstrated the passion, dedication and hard work necessary to take a mere possibility and turn it into a reality. I am proud of how we have grown together over the past 30 years and I look forward with excitement to the possibilities of the next 30 years”.

Also speaking at the event was Minister for Finance and Public Expenditure and Reform, Paschal Donohoe who reflected on the remarkable journey by Intel in Ireland and the significance of the investment made by the company over the past 30 years – “I am delighted to be here on the occasion of Intel’s 30th anniversary in Ireland and to recognise the enormous contribution made by the company to our country, our economy and our communities across that period. Intel has been a bellwether for technology development and investment in Ireland over decades. The company has invested over $15b over that time – something that has not been matched by any other private investment in Ireland. Employing just under 5,000 people directly and a further 6,669 full time equivalents due to their business activities, it also supports some 771 Irish suppliers. The scale of Intel’s commitment to, involvement with and impact on the Irish landscape is cannot be denied. I look forward to that relationship strengthening and developing further over the coming 30 years”.

A special presentation was made to Minister Donohoe to commemorate the milestone of Intel’s 30th anniversary. The presentation gift, which was accompanied by a specially created video to explain the process of its making, was a 1cm squared piece of silicon which had been milled at the nanoscale. To create the special message, scanning electron microscope with a lithography attachment was used. A logo and a text message were loaded to the tool and then milled into a piece of silicon, after which gold was deposited which enabled the message and logo to be viewed.

Senior Vice President and General Manager of Manufacturing and Operations at Intel, Ann Kelleher, also spoke at the celebratory event sharing with the audience her pride in all that has been made possible by Intel Ireland employees over the past 30 years; “From humble beginnings 30 years ago, I’m proud of how far the Intel Ireland team has come. This has only been possible because of the hard-work and dedication of every Intel employee, our supplier network and our partners in the community. Intel Ireland is one of the key high-volume manufacturing sites worldwide and as part of this network is critical to Intel’s success.”

In recognition of the strong partnership that Intel has shared with its local communities in North Kildare over the past 30 years Ann Kelleher unveiled a specially commissioned sculpture which is to be installed in the Leixlip Town Centre to commemorate Intel Ireland’s 30th Anniversary.

The sculpture, which was created by Irish blacksmith John Hogan, is a beautiful piece of hand forged ironwork that depicts through its delicate butterflies a natural scene. The sculpture was presented to Dr. Ena Hanlon, an original member of Intel’s Community Advisory panel, who also spoke at the celebration event. Remarking on Intel’s relationship with the local community Dr. Hanlon said, “I would like to congratulate Intel on its 30th ‘Pearl’ anniversary and I want to thank the management and employees for being such wonderful corporate citizens who have cared for and partnered with the local community so well. Here’s to the ‘Diamond’ anniversary — another 30 years”.