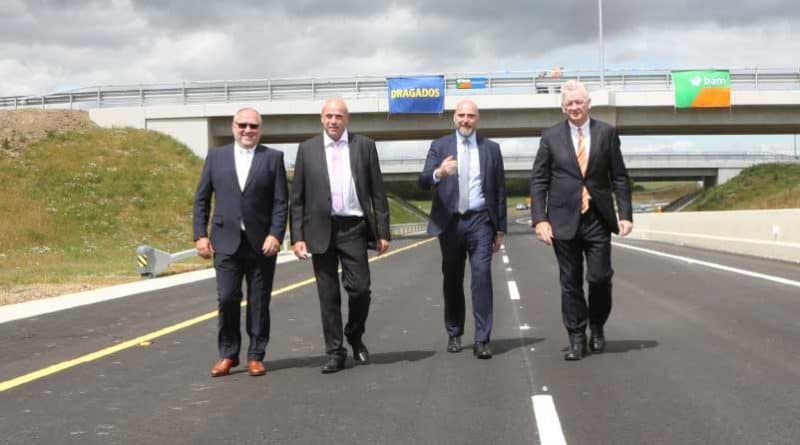 The PPP contract was awarded to BAM PPP PGGM Iridium in October 2015. The design and construction activities were delivered by a joint venture between BAM Civil Ltd and Dragados Ireland Ltd.

Costing €400 million, the combined 39 km of the M11 motorway and associated roads have been under construction since January 2016 and have been completed on schedule with 1,850,000 person-hours completed on-site during the construction period.

Officially opening the motorway, An Taoiseach Leo Varadkar TD stated, “The opening of the M11 Gorey to Enniscorthy Motorway is yet more proof of the Government’s public capital programme being delivered. The M11 Gorey to Enniscorthy Motorway is a first-class piece of transport infrastructure. I thank all involved in the efficient delivery of the project and I wish all who travel on the road a safe journey.”

Cathaoirleach of Wexford County Council Michael Sheehan said the new road network was significant not just for Enniscorthy but for the county and southeast as a whole, “The opening of the new motorway is a significant milestone in Wexford’s story. We are open for development, growth and investment as Dublin is within easy reach. This provides new opportunities for Enniscorthy to expand, to rejuvenate the town centre and offer a new chance for the whole county to tell its story and redefine itself to a whole new audience. It is the challenge for this generation – one we must maximize and make the most of.”

Cormac O’Rourke Chairman TII stated, “The completion of the M11 Gorey to Enniscorthy motorway marks another significant milestone in modernising our national road infrastructure. It will improve road user safety as well as help to provide the southeast region of the country with the capacity to manage economic growth well into the future.”

Wexford County Council Chief Executive, Tom Enright said, “The extension of the M11 motorway 27 km to the south will bring great savings in travel times, improve traffic safety and will bring employment and investment into County Wexford and Enniscorthy town in particular.”