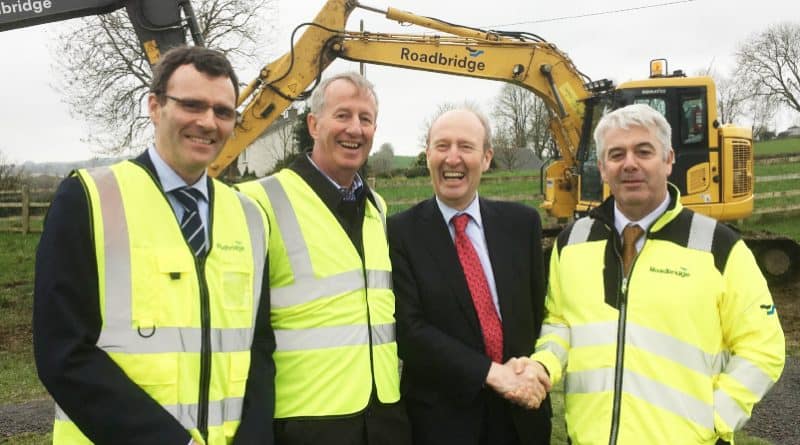 Roadbridge is gearing up to commence work on the€150m N4 Collooney to Castlebaldwin construction project.

Construction is expected to last for a period of two years and will support in excess of 100 jobs during peak times for the local community and beyond. These will supplement the Roadbridge current workforce, many of whom are from the local region also.

Awarded to Roadbridge by Sligo County Council, the contract involves the realignment of approximately 14.71km of the N4 in Co. Sligo, 13.82km of which consists of a Type 2 Dual Carriageway commencing at the existing N4/N17 roundabout in the townland of Collooney/Toberbride and extending to a roundabout in the townland of Castlebaldwin. With several fatalities over the last number of years, this stretch of road has earned the reputation as ‘notoriously dangerous’, so this project has been warmly welcomed by motorists.  The scheme will then tie back into the existing N4 to the south of this roundabout with a Standard Single Carriageway alignment measuring approximately 0.89km in length, before its conclusion in Cloghoge Lower Townland.  The expansive project will focus on sections of the N4 that pass through the townlands of Collooney, Toberbride, Mullaghnabreena, Ardcurley, Cloonamahan, Doorly, Knocknagroagh, Drumfin, Cloonlurg, Carrowkeel, Carrownagark, Kingsbrook, Aghalenane, Ardloy, Springfield, Tawnagh, Cloonymeenaghan, Sheerevagh, Cloongad, Drumderry, Castlebaldwin, Cloghoge Upper and Cloghoge Lower.

Speaking following the attainment of the N4 Collooney to Castlebaldwin development contract, Conor Gilligan, MD of Roadbridge, commented, “After over 50 years in business, it’s a wonderful feeling to see the company grow from strength to strength, with 2019 already shaping up to be one of our best and busiest years yet. We were over the moon to secure the North Runway Phase 2 construction project last year and now that we’re throwing ourselves into the N4 contract it’s full steam ahead for the foreseeable future.”

Gilligan continued, “While it’s obviously a great coup for us as a Limerick-based company to align ourselves with such prestigious development projects on a national scale, we’re also extremely enthusiastic over the ample employment opportunities that will be created as a result.”

The ambitious development plan consists of numerous phases, including but not limited to the construction of two roundabouts on the mainline and three on the local road network; the installation of fencing, lighting and pedestrian and cyclist facilities; environmental mitigation; ancillary roadworks; and the construction of major structures such as road overbridges, road underbridges, piled embankments, river bridges, retaining walls and environmental noise barriers. With such an extensive development in question, the appointment of Roadbridge to fulfil the hefty task at hand is both prudent and apt, especially given the company’s reputable track record, which now incorporates Phase 2 of construction at Dublin Airport’s North Runway.

This high-profile project, which is a joint venture by Roadbridge and Spanish infrastructure company FCC Consortium, kicked off in January and will be ongoing for two years. It involves the construction of a 3110m x 75m runway to the north side of the Dublin Airport campus, along with a parallel taxiway with runway access taxiways and rapid exit taxiways to serve the routing of aircrafts.

In yet another positive development for Roadbridge, the company was also recently awarded the contract for the redevelopment of the Alexandra Basin at Dublin Port. Another joint venture, this project will see the company team up with building, civil and marine engineering contractors L&M Keating as they work to construct a new quay wall and pavement structure at Berth 35. Works are due to begin in June 2019, adding to an already hugely busy year for the Irish-owned firm.

For updates and progress on this Roadbridge N4 project, and others you can follow Roadbridge online at Facebook\roadbridge.ie, LinkedIn/roadbridge or Twitter @Roadbridge. You can also find out more information on Roadbridge, and their skillset which goes beyond earthworks and construction, at www.roadbridge.ie