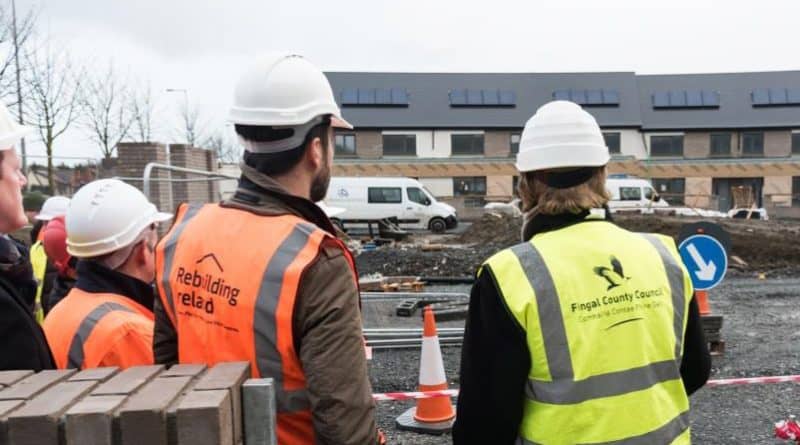 The Minister for Housing, Planning and Local Government, Eoghan Murphy, TD, described Fingal County Council’s construction programme as impressive during his visit this week to the largest social housing construction site in the country.

“It is a very positive development. It is the largest social housing build in Fingal and I think it is the largest in the country at the moment which is really impressive. We want to keep on driving that, more houses being built for people on the list, to get them into safe, secure homes,” said Minister Murphy.

This week also saw Fingal completed its first rapid delivery scheme of 20 house in Wellview, Dublin 15, with tenants starting to move in in time for Christmas while representatives of the Department of Housing, Planning and Local Government and various local authorities from around Ireland visited Balbriggan on Thursday to see at first hand the construction of rapid delivery homes in Pinewood.

The Lusk scheme was designed by Fingal County Council’s Architects Department using a collaborative BIM process and the site works and landscaping have been designed in accordance with DMURS principles.  Site supervision and project management is being carried out by a consultant team with an in-house Clerk of Works inspection regime. The contactor is Currabeg Developments Limited who was appointed by public tender.

The two-storey units are a mix of two, three and four bedroom houses. Eight of these houses are already completed and occupied and the remainder will be delivered in the first half of 2018.

The Minister inspection included completed as well as homes under construction and he was impressed with the design and finish of the houses which have been built to a high design standard and best practice guidelines.  The houses are energy efficient with A2 and A3 BER ratings and include energy efficient boilers, photovoltaic panels and mechanical heat recovery ventilation. The houses are designed with low maintenance in mind.

“When I look outside and I see how it has been designed, not just the houses themselves but also the estate and the green spaces that are going to be there for children. The way it has been done, actually very well done, is a very nice design and something we do want to see from other local authorities around the country as well,” added the Minister.

Fingal’s County Architect Fionnuala May said:  “This is the first major social housing scheme we have had in Fingal for quite a while of this size and we have taken a very innovative approach in it. We have a new house type, a new design, and it has been designed using BIM (Building Information Modelling), which is a new approach for us and something that has been very interesting to deal with. We think we will have a really good quality of house out of it.”

Fingal County Council’s Director of Housing and Community, Margaret Geraghty, said; “Our construction programme has had to be developed from a standing start so we have made a lot of progress over the last three years and we are now beginning to see the results in terms of delivery. Construction takes time, it can’t be done overnight, but we now have in place a programme that will see the Council itself construct over 1,000 homes by 2021.”

The Mayor of Fingal, Cllr Mary McCamley said: “It is clear that there has been an increasing requirement for housing in many parts of Fingal. The Council has made the provision of housing a priority but it also recognises that for new housing developments to succeed, there also needs to be a presence of community services and infrastructure and that is what we clearly have with the scheme in Lusk.”

Under the Rebuilding Ireland programme, Fingal County Council was set a target of providing 1,376 social units over three years to the end of 2017. By November 30, that delivery output target had been exceeded by 44 per cent with 1,988 housing units delivered.

The Council’s construction programme has seen 26 schemes developed over the past three years of which six have been completed with 68 units built while five have contractors on site and will deliver 128 units, Another 17 schemes, which will yield 433 homes, are currently at the tender or pre-planning approval stage.

These 26 schemes will eventually deliver a total of 630 homes and more schemes are currently being planned through Masterplan sites and the Land Aggregation Scheme.