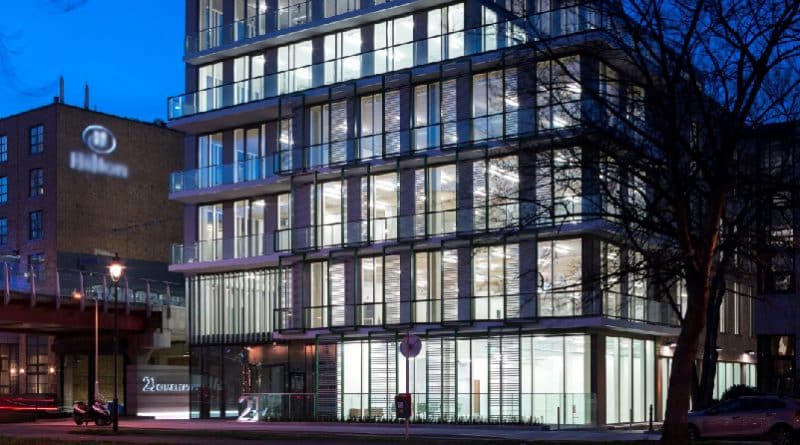 The forward purchase agreement, which was completed in the region of €45m, represents La Française Group’s first entry into the Irish market.

Situated in the heart of Dublin’s central business district overlooking the Grand Canal, the Grade A property comprises 37,000 sq. ft. of office space in a 6-storey over basement office building. Its corporate neighbours include a whole host of multinationals, including Zendesk, Google, Amazon, KPMG, Deloitte, MetLife and Accenture.

21 Charlemont – developed by Rohan Holdings – was one of the first speculatively developed Dublin office buildings to proceed in the current cycle. The project commenced in April 2015 and is due for completion in the coming days. It was announced in June that the building has been fully pre-let to communications company, ViaSat at a rate of €55 per sq. ft.

Brendan Delaney of Savills Ireland comments: “We’re delighted to have represented La Française Group in their entry to the Irish market. 21 Charlemont is a quality asset with the benefit of a pre-let agreement to a reputable multinational firm. The buildings central location, and the variety of transport links and amenities on its doorstep, provided prospective buyers with a rare opportunity to acquire one of Dublin’s best new-builds. We look forward to continuing our relationship La Française Group and supporting them on any further investments in the Irish market.”

La Française is 92% (as at 16/03/2017) owned by Credit Mutuel Nord Europe (CMNE), a banking and insurance group present in Northern France and Belgium. It has a multi-affiliate business model organised around four core activities: real estate, securities, investment solutions and direct financing. With 566 professionals and offices in Paris, Frankfurt, Geneva, Greenwich (CT, US), Hong Kong, London, Luxembourg, Madrid, Milan, Seoul and Singapore, La Française manages over €64bn in total assets, of which over €15bn are real estate assets.

Marc Betrand, CEO/CIO of La Française Global Real Estate Investment Managers, comments: “On behalf of La Française Group, it is a pleasure to announce our entry into the Irish market with the purchase of 21 Charlemont from reputable developer, Rohan Holdings. We are very impressed with the high quality of the development, which benefits from superb transport links and a pre-letting to a leading US broadband and communications business. These excellent fundamentals will ensure long-term, sustainable returns for our investors.”

“Jamie Rohan, Managing Director of Rohan Holdings, comments: “We are delighted to have completed this office deal with leading fund managers La Francaise. It has been very satisfying to transform another underutilised site into a prime HQ facility and we continue to seek out new opportunities in this sector.”